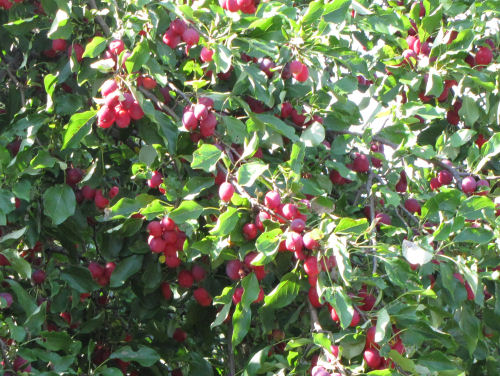 Our crabapple tree is just loaded with fruit this year. This is an old-fashioned crabapple that has fruits about the size of a ping-pong ball, not one of the ornamental trees that have fruits the size of a dime. This year they seem to taste extra good, so I'm going to try to make significant use of the bounty. 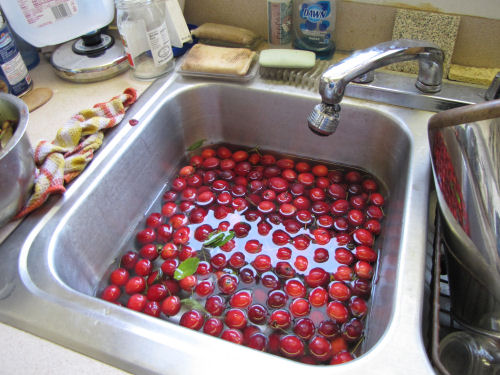 I'm not a big fan of pickled crabapples. Well, I like 'em, but we've proved by experience that I just don't eat them up fast enough to bother. But I decided to try some juice. If I worked at it a little harder, I really could make a lot of the juice I drink for breakfast. As you've heard about before, I often make juice a really easy way, right in the jars. I want to try that too, but decided I better do some the traditional way, because I know that will work.

So that started with washing them, removing the blossom ends and stems, cutting in quarters and boiling them. You don't have to peel or remove the cores. Once they are boiled and mashed up then you let it strain in a jelly bag to get the juice out.

I forgot to take a picture of that, but except for the color it looks just like when I strained the mulberry juice 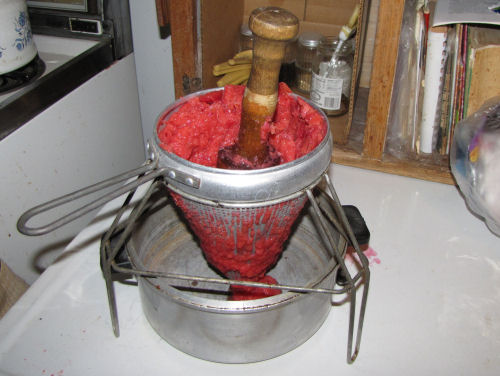 One of the good parts of this is that you at least get two products for all that work. You get juice, and if you put the pulp through a food mill you get crabapple sauce. 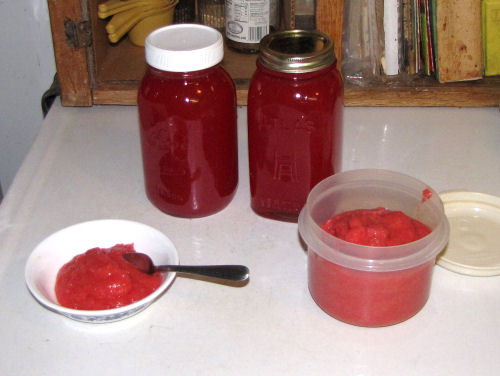 So here's what I got for my work. This started with a half-basket of fruit (making NO dent at all in the potential), and when cut up was about 1.5 gallons of cut-up fruit.

I ended up with two quarts of concentrated juice. It can be diluted for drinking, or used to make jelly or syrup. I wasn't going to do any of that, but Om is making noises about jelly. I told him he's got to help with another batch for that to happen. It's a lot of work to cut up all those hard little fruits. And I also got about two cups of really yummy pink applesauce. I added just a little bit of sweetener. The dish on the left is for my evening snack, the rest is for another day.

The flavor of the crabapples this year is exceptional- it's as good as cranberry. I really would like to make a lot of juice, but, WOW, it's a chunk of time. I wonder if I could just trim the blossom end and not worry about the stems, since the food mill would catch them.

If I can the juice for drinking (those jars aren't sealed), I like that it's concentrated. It will take less storage room that way.

I think I must do something with the two carrier bag loads of small, sweet apples left on my step this week. You have inspired me to leap into action!

We had the ornamental kind of crab apple trees in our front yard when I was growing up.
That does sound like a lot of work but the crab apple sauce sounds yummy

I love crabapple trees, they are beautiful in every season, I don't think there's a more beautiful flowering tree but they don't grow where I currently live, so I'll admire them vicariously though your blog.

That looks like a lot of work and time but delicious.

I've bought a crabapple at Trader Joes that is sweet larger and delicious, it's yellow and red and is wonderful roasted with vegetables, you should plant one, the fruit is delicious right off the tree.

Looks like you're putting the fruit to good use.

The campus of Michigan State University is home to one of the most (if not the most) complete collection of flowering crab apple trees. During apple blossom time it is great to see all the different varieties. The trees on our property are of the ornamental variety and not very useful for anything at all.

Oh please try some crab apple jelly this is really delicious!! Crab apple compote is wonderful on the top of porridge ..... I am a fan of the hedgerow fruits - they haven't been messed with or sprayed with anything and so you can feel them really doing you good. :)
We have made jars and jars of elderberry compote this year - I've already eaten masses of it ... but better inside us than waiting on the cupboard shelves!

i don't think i have ever tasted a crab apple juice and crab apple sauce, nor i have seen the tree, you're so good for making use of the fruits. some of my neighbors, their oranges, lemons and peaches just fal to the ground, too much, sometimes i wish i can pick them up and make something. we only have lime tree at home.

Oh such inviting pictures, I am starting to have cravings here. Raspberries time will arrive soon and then I shall try smth similar. Kisses and congrats.

Looks good. Messy and a lot of work, but good.

Glynis- mystery fruit! grand, unless you don't have any time.

Ann- it's all sooooo yummy, I can't resist making more

Ro- I don't think I could handle any more apples of any kind! If I could pick a fruit to plant I'd go for a peach tree.

Chuck- I've seen that arboretum, but never the crabs in blossom

Polly- I may do some jelly. Nearly did tonight, but didn't have enough sugar on hand. I have a friend who is up to her elbows in elderberries. We'll swap product later.

betchai- yes, it's painful to see fruit go to waste

unikorna- raspberries just starting? seasons sure are odd around the world

Joyce- if things are good enough I can tolerate the mess

Reena- It's SO good that I'm ignoring all the pan washing.

I thought it was a cranberries.. Nonetheless I think it is still sweet and delicious.

Trying to get back on track here.

It all looks so delicious. How long will the juice keep if it is just bottled and not sterilized and canned? Do you put the applesauce away or can it? I can imagine that the whole process is very labor intensive.