So Slow, But Undaunted

{EAV_BLOG_VER:8616ac8a1f32aaa0} just ignore this- it's a verification code for Empire Avenue.

This could get long... but I just have to tell you about it. Today was the swim for the Hamlin Lake Preservation Society. The weather was looking iffy with gray skies. We checked in, got our t-shirts and waited around for 9 am. Of course it started raining. No one cared much about that, but then some thunder rolled in and there were even a few flashes of lightning. Nobody was very excited about being in the water with that scenario. But in about 10 minutes the storm moved off. 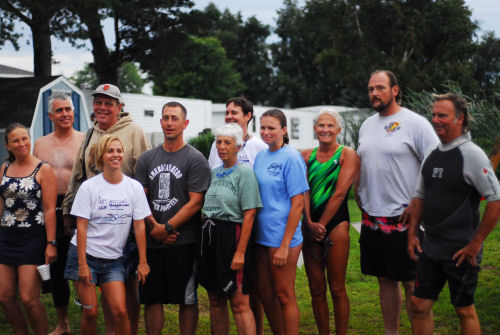 They lined us all up for a group picture. Eleven people were waiting to hop into the water. At least the water was quite warm- someone said 74 degrees.

Where were we going? Yes that far shore looks rather distant. Yes, it really was that dark, even after the storm passed. 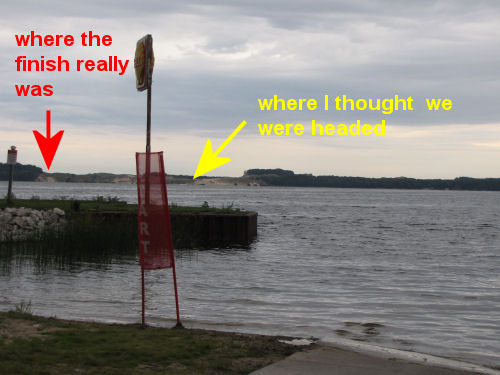 They only gave us some vague instructions about where the finish was. As it turned out, I was headed quite a bit too far north for about half of the swim until one of the escort boat people told me that I needed to veer to the left.

Om came out to see me off. He got a few pictures to prove that I was actually a swimmer. 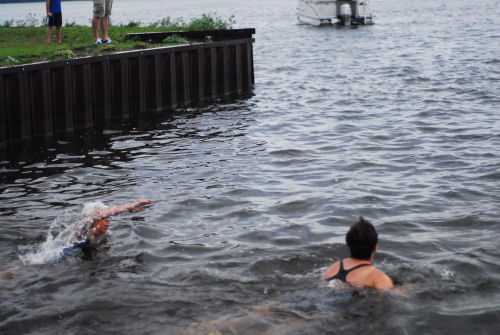 That's me on the left. You'll have to take my word for it that I continued to swim... Om wasn't in a boat, so no pics till I came back. 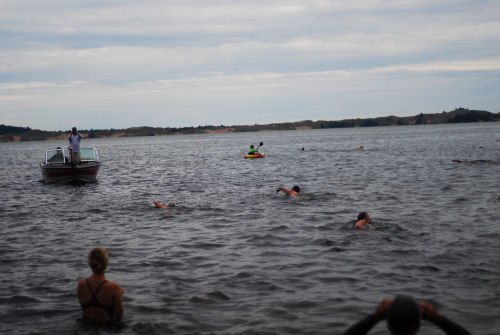 I'm not in this picture, but this shows the swimmers heading out, and one of the escort boats. It became obvious within ten strokes that I was going to finish last. That's what comes of swimming alone- I had no way to gauge myself against anyone else before this swim.

But, I was certain that I could do the swim. I've been practicing right? The water was, indeed, a comfortable temperature. Near the shore the water was pretty clear, but soon we had to swim through a big patch of the spiral eelgrass. That was kinda nasty, just because it kept draping over my arms and being annoying, and it was a long patch. I don't really feel weird about that kind of stuff, but I was surprised because it wasn't too near the shore.

I have been counting my strokes the last couple of practice days. I thought that way I could estimate how much farther I had to swim. So I began to count. I easily made 250 and thought that was about a quarter of the way, but I didn't want to be too optimistic, just in case my map-measured practice course was a bit off. I made it to 500 and was still feeling good.

At 1000 strokes I was trying to guess how much farther I had to go. Somewhere around then, the lady in the boat told me to change course. I kept swimming. At 1700 stokes my back was starting to hurt, and that sand dune still wasn't very close. Hmmm.

About then, I figured that either the planners or I had made some serious miscalculations on distances. I switched to side stroke for a while, and realized that I'm also not very good at keeping a straight course while swimming. Now that I knew where I was supposed to go, I was having trouble heading there. I kept swimming.

I did some side stroke, and then I switched to breast stroke. Then I did some more crawl for a couple hundred more strokes. A couple of waves of chop washed over me and I had to stop and cough both times since I'd swallowed a serious portion of the lake both times. Nothing serious, but I realized that when swimming distances in open water, one doesn't worry too much about form- just turning your head the minimal amount to take in air- it's more important to take in air than water!

Those darn sand dunes kept playing keepaway. I wasn't worried about finishing, but that stitch in my lower back was getting very uncomfortable.

After a bit, another boat came near and the reporter from the paper who was watching the swim from that easy location teased me, saying that he hoped I could hike straighter than I could swim. But he also said that the good news was that I was more ready for my Finger Lakes swim (he'd asked about that earlier) than I knew, since this swim had now been measured at 1.8 miles, and I'd done even more than that.

I kept swimming. While I was still about 50 feet from shore my strokes began hitting the bottom of the lake! It had suddenly become really shallow, and there wasn't much choice but to stand up and walk the rest of the way.

As it turned out, three people had finished only a few minutes before I did, and one of the 11 who started had bailed out early, so only ten of us finished, and I wasn't way far behind. 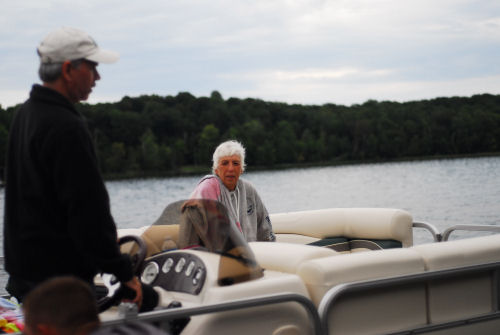 There is no way to drive to those dunes, so the only people waiting for us were some boat owners. They had brought across our towel, sweatshirts, etc. and a cooler full of bottles of water to drink, and I really appreciated that. Very shortly we were brought back to North Bayou Resort, which had also been our starting place.

Time in the water: about 2 hours 15 minutes. Wow... my longest practice swim was an hour.

Things learned for next summer: 1) with some more training, I should have no trouble doing my Cayuga Lake swim.
2) I need to do some exercises to strengthen my lower back. That was really the only thing that was sore, but it was really hurting.
3) I'm not fast... ok... I can live with that. I'm not planning to race, I just want to do it.
4) I need better goggles. I had to take mine off because they were making my eye sockets sore.
5) I need to learn how to travel in a straight line.
6) The distance I've been training is only about 0.8 mile.

When I got home I realized that I really smelled like algae. I got out of my wet suit and enjoyed a nice hot shower. Then I discovered that the inside of my swim suit was bright green with algae that I had "picked up" on my way across. I wonder if this is one of the problems that the Preservation Society is working on.

I'll admit it... I'm tired. I didn't do a lot else today. I finished reading a book, and did some internet surfing, but I don't expect any lingering fatigue tomorrow. All in all... it was worth doing for the things I learned.

wow.....great job! It is hard to stay on line but it is something you can practice...congrats!

Wow, you certainly have stamina! I can do endless lengths of my pool but not sure I could achieve your goal!

Congratulations on your finish. I can't even swim so you had me beat right from the start....lol I can only imagine how exhausting that must have been

You have certainly done well. Cheers.

Well done you!!! Even with the water quite warm as you say the distance looks a little over-whelming .. the thought of arm over arm without a rest leaves me in full admiration of your swim. You should be really proud of yourself because it is a marvellous achievement.

oh, congratulations, Sharkbytes, so proud of you. love it that you are able to do and accomplish so many things. you are so strong you really serve a very good model for many.

Congratulations, Joan!! I can't imagine doing such a swim....I can make it the length of a pool and, in my youth, I used to swim a much greater distance at Auburn, Alabama's Lake Chewalca but swimming has never been my forte. You always amaze me.

Well, that was one heck of a swim, Sharkey!! Good for you doing that! I'm very impressed.

I joined the local pool this morning and starting swimming again. I used to swim competitively in high school, but that was many years ago. When I started swimming, it was like I was 16 again. That smell of chlorine brought back many memories.

Loretta- I need a coach! Too bad I can't pay.

Glynis- It's just endless lengths with not having to bother to turn around and no chlorine!

Ann- What do you mean you can't swim. You are always around the pool.

Polly- This was just the training run for next year! I'm very encouraged.

Carmen- I'm just too darned stubborn to give in to the years. So far, fairly good.

Lin- wow! I never did any competitive swimming except dinky stuff at Girl Scout camp. I bet you'll love getting back in the water.

grats, I knew you'd make it.

Sharkbytes - Great article & congratulations! Two hrs & 15 minutes in the water must have been grueling - but I knew you'd make it! Keep up the good work & you will certainly make it across Cayuga Lake. Cheers, John