This morning, Ester and I drove down to Rome City, Indiana, to visit the cabin of Gene Stratton Porter, named Cabin in Wildflower Woods. Ester has been there several times, but I had never been there. The buildings are closed on Mondays, but she said that we could still enjoy the gardens and look in the windows. 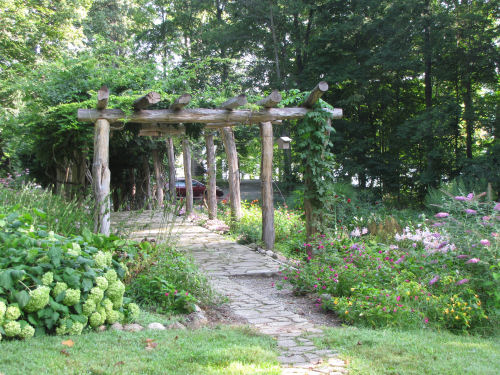 The gardens are extensive, for a place that was a private residence. This pergola extends through the planted beds. Even this late in the season it was very attractive. Ester says a visit in the spring is great for viewing the wildflowers. 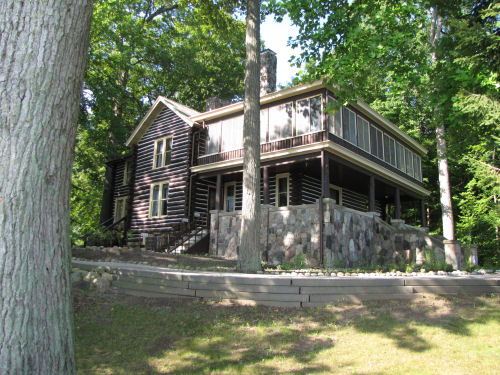 The house and work shed are genuine log construction, but the house is fully finished inside. Since Ester has taken the tour several times she was able to tell me quite a lot while we looked inside. 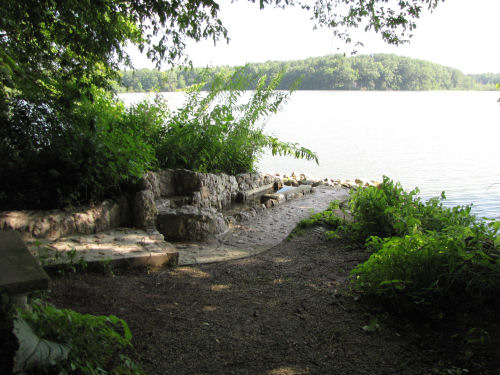 This is one bench that was there when Gene lived here. The rock structure encloses a spring that flows out into Sylvan Lake. It was fun to sit there and consider that she also enjoyed that same view. 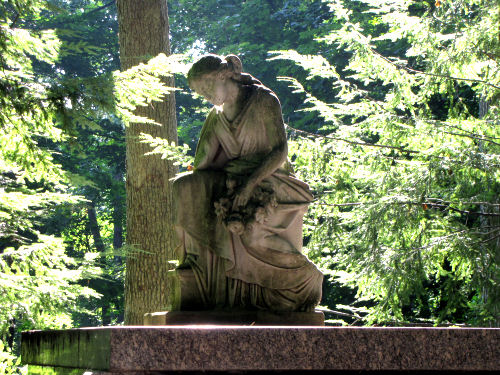 This is the monument where Porter and her daughter are buried.

So, do you know who Gene Stratton Porter was? I thought you'd never ask! She lived from 1863-1921, and wrote both romantic novels (not like those of today), and natural history books. "Romantic" generally meant that the emphasis was on relationships between people, and that the endings were happy or optimistic. One of her most famous is A Girl of the Limberlost (1909), which was also made into a movie several times.

She is considered to be one of Indiana's most famous authors. The Limberlost Swamp is a real place (but far southeast of the cabin we visited). Porter used the proceeds from her popular writings to support her love for studying and writing about the birds and plants of the wetlands.

I've actually never read more than a couple of her books. I've found A Girl of the Limberlost on line, free. I've started reading it.

Have a good rest, and keep the memory fresh.

So lovely. I can never hope to visit this place.Thank you for sharing.

what a very beautiful home, am sure inspiration from there would keep flowing in. hope you have a good rest.

Catching up on your posts. What a gorgeous place to sit and enjoy the peace.

What a pretty place that is. I would love to see that.
Glad you made it back home safe and sound

That is a beautiful place. I've been there several times. I have several of Porter's books. First one I read was "Freckles" when I was quite young.

That first picture is just great. I could hang around a place like that forever.

rainfield- thanks! lots of good things to hang on to

umihoney- blogging has really brought the world closer together, but some places are a bit to far to actually visit in a lifetime

John- it really is... I hope I can go back some time when it's open or they are having an event

betchai- I know... I think it really is easier to write in a beautiful setting like that

Glynis- wouldn't writing be facilitated there?

Ann- well, it's only across one state for you... not across the world at least. Actually the main Limberlost house is a little closer.

Ratty- it was nice to be there on a day when it was closed. There were only a few people around the site.

The place is gorgeous and looks very livable besides. You made me curious about Gene Stratton Porter, so I popped on over to ebay to see if I could buy one of her books. :)

How pretty the area is! I haven't read anything by Gene Stratton Porter but I'll have to add her to my reading list. I need to read your book, too, one of these days. When I get back from my six months in India, I should finally have a little money saved so I can finally get it.

Ivy- I know I'm going to want real copies myself.

Carmen- Well, you can read several of GSPs for free! Go for it.