Hiking and Watching the Fishermen


Today was the September hike of the Spirit of the Woods Chapter of the NCTA. I was the hike leader, and chose to go to a place on the Pere Marquette River called Maple Leaf Access. The trails are those made by anglers, but you can wander along the river for a long distance, and make some loops with old roads. The views along the river are always great. 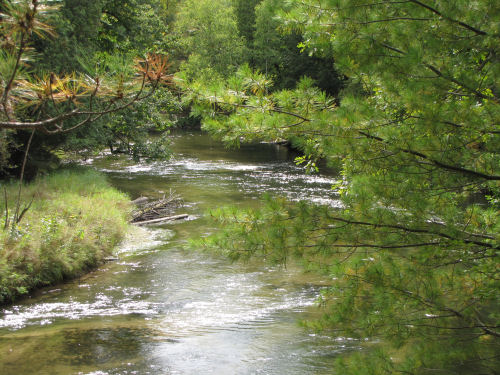 It turned out that only one other person came. That was Vickie, of Vickie and Joan Go Frogging. As it turned out, the river was lined with anglers, about one every 50 feet! I know almost nothing about fish and fishing, but Vickie does! Her husband (who didn't come because he's having pain management issues with his neck) likes to fish a lot, and Vickie has gone with him enough to explain things to me. 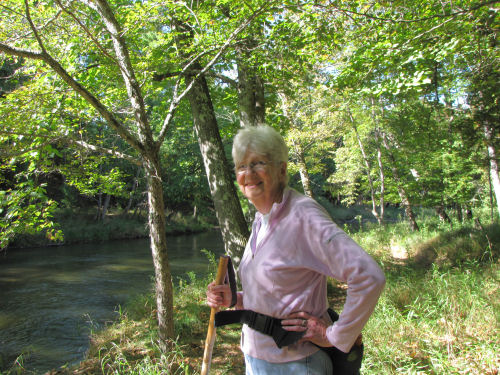 I had asked some guys yesterday what they were fishing for, and the answer is salmon. Since the salmon have been introduced to Lake Michigan, they come up the rivers to spawn every fall. These are big fish, two feet or more long. I've seen the river when there were so many fish it was like a traffic jam. This weekend, there weren't that many, but we saw a few swimming across the shallows. The fishermen and women were trying hard to entice them to bite. Vickie says that means to just annoy them enough, since once they start upstream the no longer eat anything.

We did see some fish get hooked. We watched these guys try to land this fish for about ten minutes. You can see the fish break the surface in this picture. 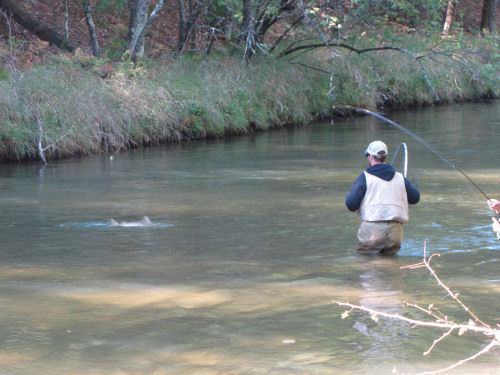 The guys were walking downstream with the fish, and were getting a bit out of camera range unless I was willing to get in the river with them. Since my waders (yes, I have some) were home, I decided we'd leave the guys to do their thing without our help. However, a few minutes later, after we were high on a bluff again, we heard cheering, so I think they landed it.

Now here's the really odd thing. Vickie says that salmon at this point in their life cycle don't taste good at all. They are already starting to die, and their flesh tastes very fishy. I suppose some of the anglers might have been out just for the sport, and planned to release the fish. But we did see several that were keeping their catches on stringers. Here's one that another guy was planning to keep. 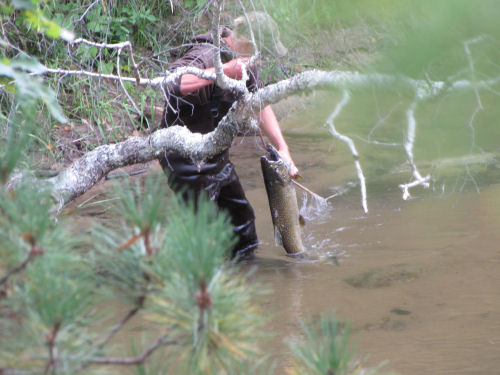 We had a great walk, lunch in the sun, and got a kick out of watching all the people chasing fish.

Looks like it was a beautiful day for a walk! Nice photos, too. Thanks for sharing.

a beautiful spot for a hike. Very interesting about the salmon, I had no idea.

Casey- I thought of you with the fishing

Ann- Me neither, I'm clueless about fish!