The Lesson of the Shrew


This is another of those posts that some of you may find difficult. It involves a dead animal. But, quite often, it's possible to get clearer pictures when a small animal is still. I'll show you no gore, so take a look at this small mammal.

First of all, shrews are the smallest North American mammal, but this one, the Northern Short-tailed Shrew, Blarina brevicauda, is the largest of them. The overall length of this one, not counting it's tail, is under three inches long.

This is the most natural pose I can show you, since it was already stiffened when I found it. 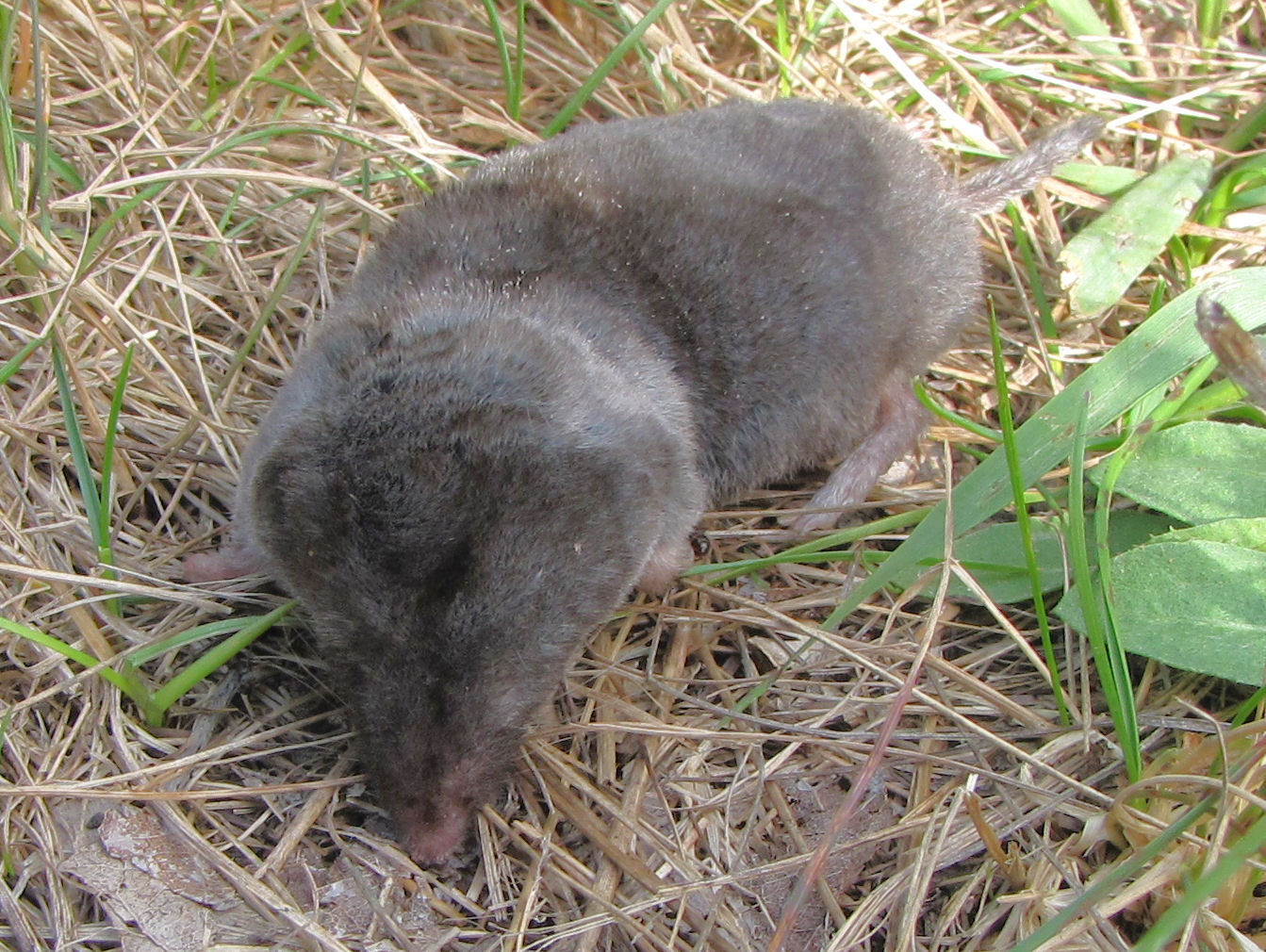 First of all, how do I know it's a shrew? The small size and short tail narrows it to a vole or a shrew (mice have long tails). If it were a vole it would have large ears and a less-pointed nose. It would probably also look more brown than dark gray, although I've seen voles that are quite gray.

Here's a side view, and you can really see the pointed nose. 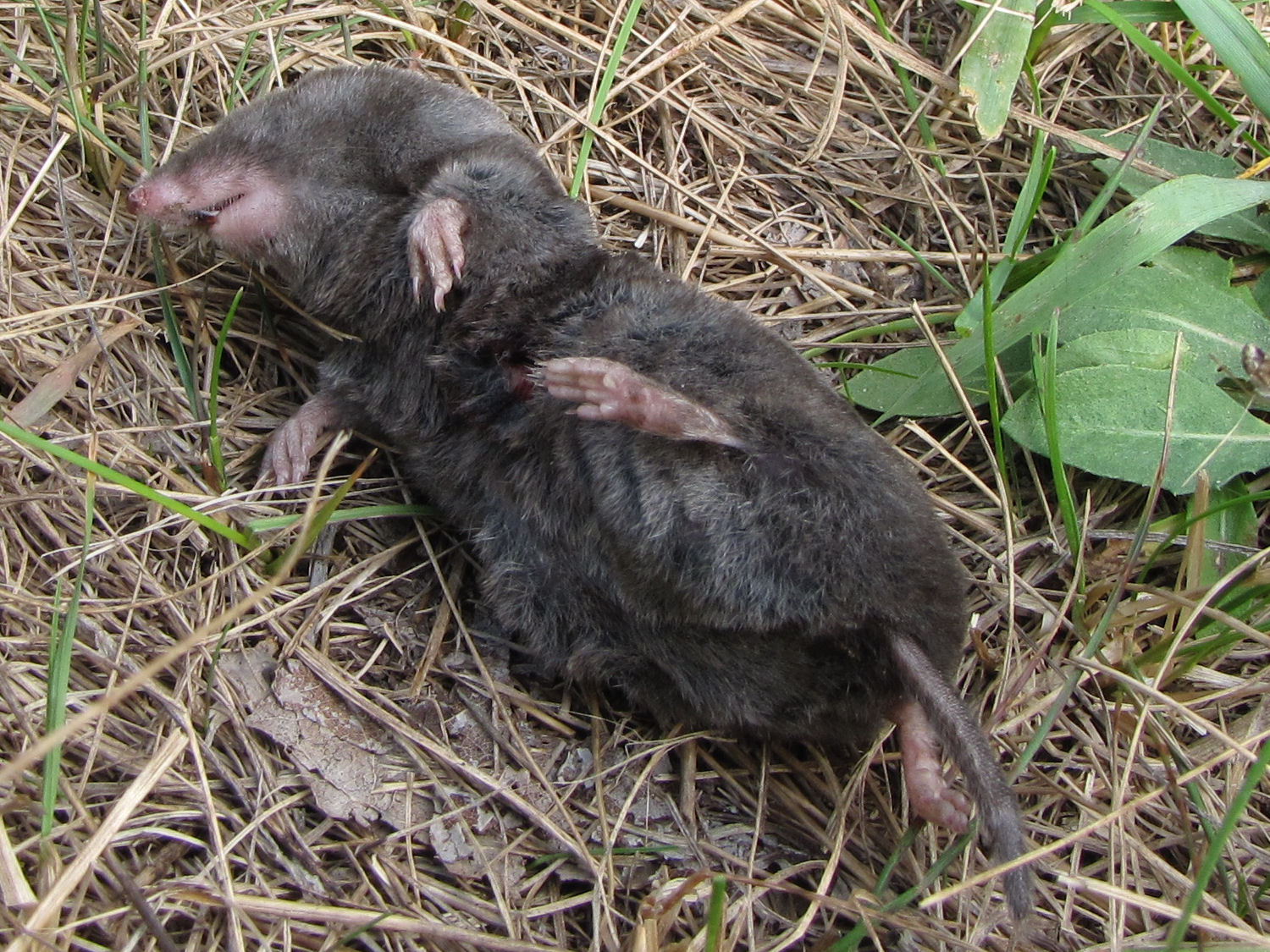 That darker spot between the front and back legs is where the fur is matted from one small bite wound that killed it. More on that in a bit. You can also tell in this view that the ears just don't show at all, really.

Finally, here's a view for scale 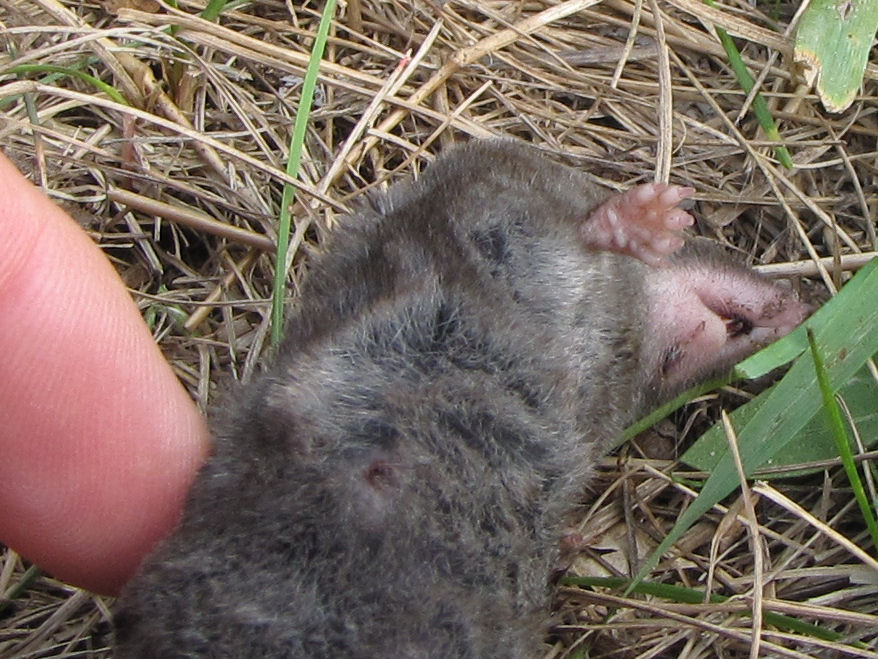 Also look at the nose. See the smear of dried blood? I suspect that this little guy took a nip out of whatever got it. Although most any animal might try to bite if attacked, shrews are noted for being fierce. In fact, the first shrew I met, as a child, had been cornered by the dog. Of course, I tried to get as close as I could, and the shrew jumped right at me and bit my hand!

Now, you might wonder why an animal would kill this shrew and then not eat it. It might have been the fox, or a weasel. The hawk might have killed it, although the wound seems small for that option.

Shrews taste terrible. (I take this from research, not personal experience.) They have musk glands on their sides and bellies that give off a nasty scent . This shrew gave its life, but whoever killed it learned a lesson about attacking other shrews.

In life, they can attack animals larger than they are because their saliva contains a toxin that causes partial paralysis. And their bites are very painful to larger animals. I do remember that its bite did hurt more than nips from mice or garter snakes.

Even the lowly shrew has an important niche to fill. Each one can eat as much as three times its body weight in a day. They mostly eat insects and larvae, so help keep these in check from doing too much damage to grain crops.

Even though it's not living, I'm pleased to be able to show you another of our native mammals.

And the lesson from the shrew is: Don't mess with shrews. If you do, you'll pay the price.

Lovely post. We have shrews in Sweden too. My cats used to hunt them on the farm. But they never ate them.

Thank you for visiting and commenting on my post about my cat Cajsa's second litter of kittens. It means a lot to me that you enjoyed reading this post because you are both an excellent writer and a well-informed nature-lover.

I try to visit your blog, My Quality Day and your blog about short stories as often as time permits. Lately I haven't had much time to visit too many other blogs. Entrecard calls me 'Just here for the view'.

For the benefit of other readers:

Excellent info about the Shrew. I didn't know we had them here in Georgia until a past cat brought me one as a gift. Just another reason I now have inside only cats.

Chuck- Yes! On all levels of meaning

Anna- Thanks for commenting. I enjoy your blog, but don't seem to have much to say about the "adornments" part- which is your whole point, of course!

Jean- There are shrews all over the world! You undoubtedly have the southern one, which is pretty much the same.

Best shrew article I've seen today. Seriously, very interesting and informative. Caught one of these in a mousetrap years ago, though I never understood why it wound up there.

My cats used to come home with shrews when we were young. They never ate them, but they did play with them. They are very similar to mice--except for the lack of the long tail.

vanilla- good one! And I'm honored to provide you with that quality read.

Well, other than the Shakespearean play, "The Taming of the Shrew" - and that wasn't about your cute little shrew, I'm not familiar with these little critters. I suppose their ferocity describes that of the lady in William's play. I'm going to have to read up on them.