Is it a Karner Blue?

This little blue butterfly was flitting around my back yard a few days ago. I didn't get any stunning pix, but I was hopeful to get enough for an ID. Maybe. 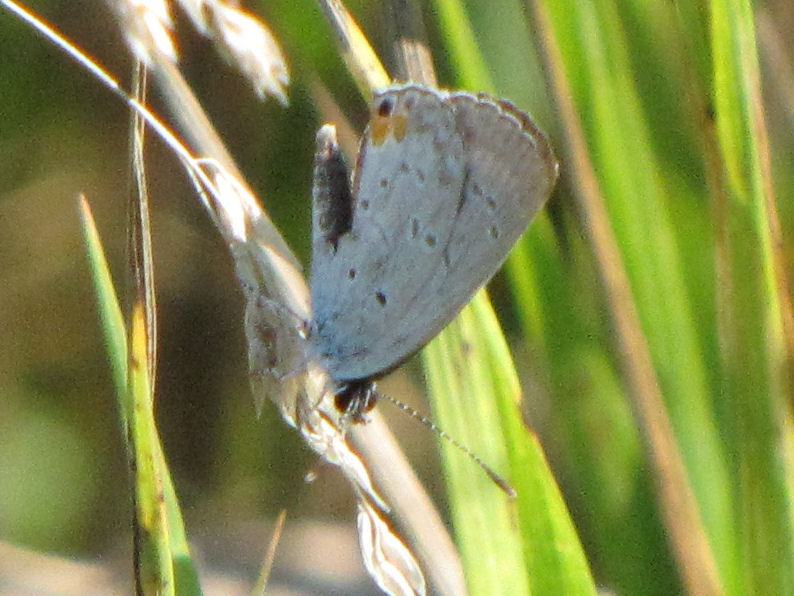 This is the best picture I got. I was pretty excited, because I remembered just enough from my two days of helping with the butterfly count to know that the Karner Blue, an endangered butterfly, only has orange spots on it's hind wings. So far, that fit.

The real problem is that there is no wild lupine here at all. It doesn't seem to grow any farther west than about 10 miles from me. And the Karner Blue butterfly has to have it.

So, I sat down with my identification card that the Forest Service gave me, to try to figure out what this blue butterfly might be. Yes, it has orange spots on only the hind wings. That narrows it down to the Karner Blue, Gray Hairstreak, or the Eastern Tailed Blue. It's not the Gray Hairstreak; that one has lines on the wings, instead of the spots you can clearly see. If it is the Eastern Tailed Blue, it should have a funny little tail on the lower edge of the hind wing.

I sure can't see one, can you? But, as much as I'd like it to be a Karner Blue, I don't think it is. The KB should have a whole line of orange spots, not just two of them.

All the rest of the pictures I got are out of focus, but one of them is at a better angle to see the edge of the wing in silhouette. That could be a tail...

I think I have to conclude that this is the Eastern Tailed Blue butterfly, Cupido comyntas. It's quite common. You have to keep in mind that all these little blue butterflies are, well, little! With their wings folded like this they are about half an inch across. So I'm chasing little specks of blue through a field hoping they will sit still long enough for me to find that little spot through the camera and then hope that the camera will focus.

If I can hold on to the differences, that's three little blues that I know I've seen. I've put the other two in the links below.

Hello there! Thank you so much for visiting and commenting on my blog.

We have a few butterflies in our front yard but they don't linger so long since we have a lot of kitties. ^_^

I lean toward the eastern tailed blue too. Photos in Google image search are pretty darn close to your pic.

You did a good job getting the photo.

At least, you're out there documenting them, Joan. Maybe a Karner blue will flutter your way!!

for it being as small as it is you did pretty good at getting that first one. I like how the wings look like they have scalloped edges

Ruby- thanks! Butterflies are pretty nervous in any case.

wiseacre- I'm sure it's the ETB. Google image search can be useful, but may serve up wrong pix and easily as right ones.

Jean- well, I keep snapping and then look later to see what I got!

Carmen- If only I could get lupine to grow for me!

Ann- they really are beautiful little gems, no matter which kind.