Om and I decided to celebrate our anniversary (which was last week) with a bike ride, but we couldn't manage to schedule it till today. 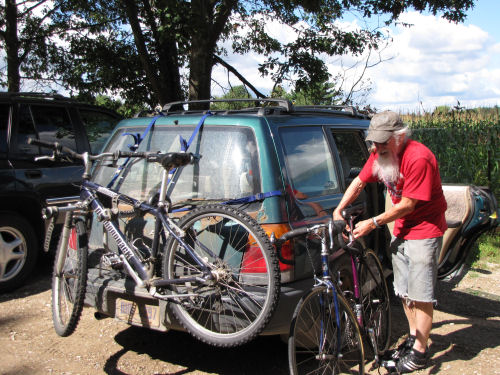 Om wanted to ride some of the White Pine Trail south of Cadillac. The entire trail runs for 92 miles from Cadillac south to Grand Rapids. It's a rail-trail, on the former bed of the Grand Rapids & Indiana, which became Michigan Northern RR, which was under Penn Central. Of course, that means it's quite level and straight. 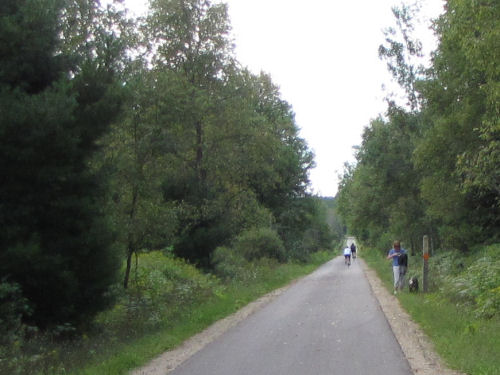 That said, it does climb gently to one high point, and there is almost a view from there. 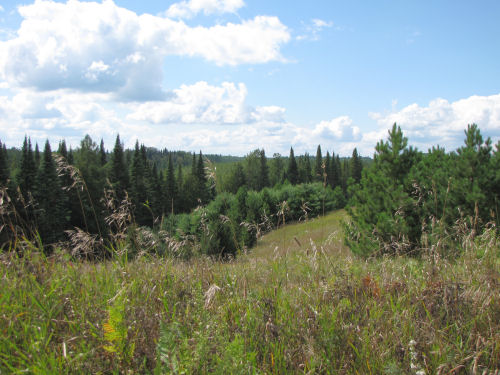 We rode 11 miles to Tustin. There is a small museum there, the Pine River Area Museum, but it wasn't open. I'd like to go back when it is. Small-town museums can be fun, and the collections aren't so overwhelming. Then, we rode back, of course! 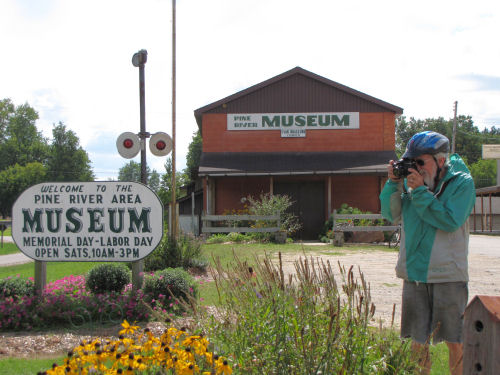 Then we went to Ruby Tuesday to eat. I'm not usually impressed with chain restaurants, but I have to say they had a really wonderful salad bar. They had real greens, not just iceberg lettuce, and a large selection of other veggies and toppings to add. There were a few other salads too- potato, macaroni, maybe something else.

We've been putting up with each other for 43 years. I guess we'll go for a few more.

Tomorrow, I'll show you some other things we saw.

Yay for lovely day for riding. Ruby T here in Florence also has a wonderful salad bar...glad y'all had a nice celebration and found a museum to go back and check out sometime.

Congrats on the anniversary. What a great way to spend a Sunday afternoon! I'm looking forward to more pix. Sylvia has a sister that lives near Tustin.

Congratulations on your 43rd wedding anniversary! That was a l o n g bike ride! We only went to Ruby Tuesdays once but I remember they did have a very good salad bar and our burgers were HUGE!

We went to Golden Corral for our anniversary.

WOW 43 years, that's impressive. Happy Anniversary to you both. Sounds like you had a good day

Ro- we really did have fun. It cooled off too, so it wasn't miserable

Chuck- it's a small world. I think you'll like these nature pix

Karen- glad you got to go out too.

Ann- it is impressive- I can't even believe it.

Be a Lifesaver Of Goodness said...

I probably would buy a mountain bike in my next vacation so I can join my HS classmates in one of their rides in the outback.

Good for you and Om - 43 years is commendable. I guess you've figured out the secret of sharing! I hope the years continue to be good to you, Joan. You are important to many people, me included.

It's been awhile since I've eaten at Ruby Tuesdays but I loved the salad bar.