We have certainly been having thunderstorms this year. They started at 10 pm and never let up with a bright spot on the radar still coming our way at midnight. I'll update you this morning.

The work day began with a shopping trip. We hit three stores to get more stripper, various hardware and supplies, and then some searching for shelf paper/drawer liner. More on that when we're ready to "install."

Marie stripped old paint all day. She's a trooper. The base coat of paint is a horror to remove. My furniture refinishing guru (who's been consulted on this project more than once) says it was probably painted white from the factory with a spray coat of primer under the old white enamel paint. He thought we were doing well to get as much off as we did. The oak exterior is pretty good (white spots in a few places of open grain), but some of the interior wood (four kinds including cherry!) still looks slightly whitewashed. Ah well, it will have to be considered "character," because the white paint has just soaked deeply into those soft woods.

I stripped paint and worked on the various repairs that needed to be done. I successfully glued two split piece of wood back on- so well, in fact, that when finished they will be hardly noticeable. I had less success on repairing some buckled veneer. My first attempt at forcing some glue under the buckled spots, clamping and waiting did nothing. That was pretty disappointing. So... I just dampened the area, and clamped blocks of wood on it all for overnight. Just checked it- it's MUCH improved, almost flat. I think we are going to just lightly polyurethane and not mess with it any more. 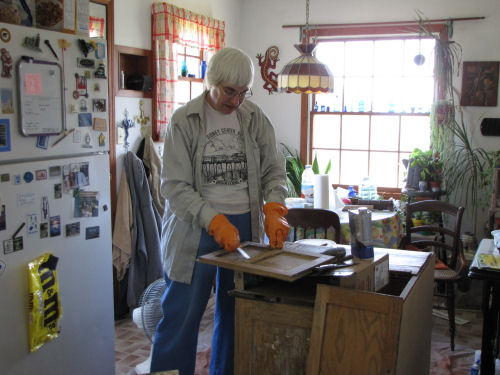 We also put the first coat of polyurethane on the upper section and most of the drawer fronts. Yesterday didn't seem outrageously humid, but the poly didn't dry well for some reason. It's ok this morning, and we can go to coat two, but that is pretty odd. I hope today will be a better drying day because we want to finish this project! 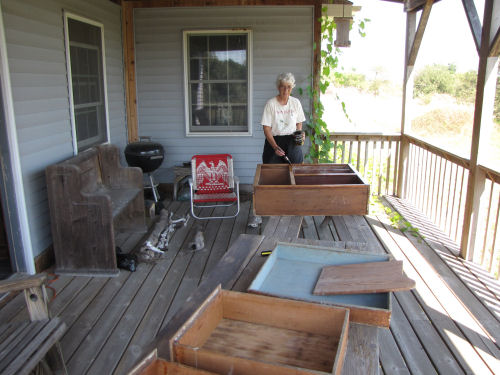 I'm annoyed with myself that I didn't take real before photos. I guess I've been looking at that half-done cupboard, with the old paint and grease stains everywhere for so long I didn't want to preserve the memory.

That cupboard has been in continuous use as a primary kitchen work space for 91 years. That's something of a guess, but it was my father's mother's cabinet. They built and moved into the house I grew up in in 1921, so I'm thinking it's at least highly possible it was purchased for that house.

Posted by Sharkbytes at 8:36 AM

Your furniture refinish is looking better all the time.

Last night, around midnight, I gave up trying to get any sleep in bed. I moved to my recliner with the heating pad. Around two, I was still awake when the wind started. I finally woke around three to wind and rain (0.4 inch).

I remember refinishing an old cabinet years ago. What a pain. You're lucky to have help with it.

Chuck- The biggest storms were even north of us, but we got some serious lightning. A lot of power outages around us, but we were ok.

Ann- It has certainly been a serious endeavor, but the end is in sight.