Spirit of the Woods Hike Yesterday


We hiked yesterday with our Spirit of the Woods trail club. I made a major goof in road names, and it turned out to be a 10 or 11-mile hike instead of 7 miles. No one killed me (yet), but we were all really tired. One of the couples had a cabin very near the trail, and we more or less ended there with ice water guzzled in the shade on their deck near the Big Sable River.

Fortunately, it wasn't a blistering hot day, and the trail was all in the woods, so we weren't wilting. 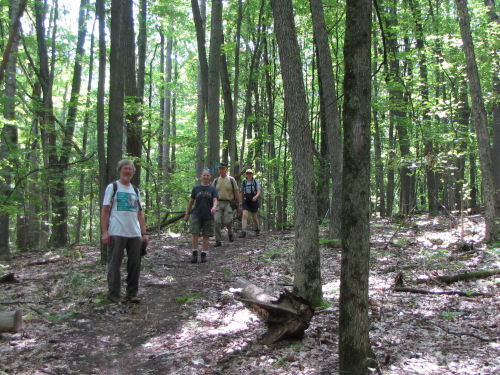 Our first goal was to reach McCarthy Lake for lunch. I love this little lake! Unfortunately, there was a big contingent of campers (which was fine), but they had brought five ATVs and the kids were riding all over. Very noisy and smelly. A couple of hours later, we reached the Big Sable River, and crossed on the Vince Smith bridge. Almost immediately after this picture, we bailed out! A few of us hiked on the additional mile to get cars after a rest. 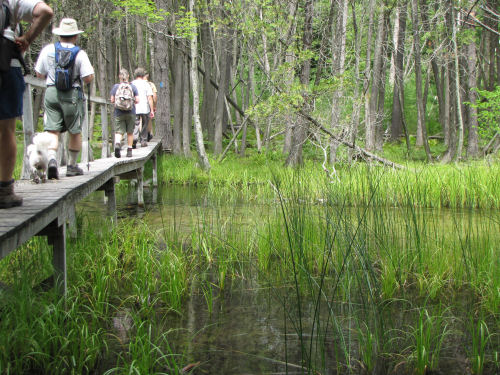 We had a great turnout, and a great time. There were nine humans and four dogs. Two of the dogs shouldn't have hiked 10 miles, Maggie being one of them. She was really, really tired, but she made it. I felt so bad I'd done that to her, but I think she forgave me! 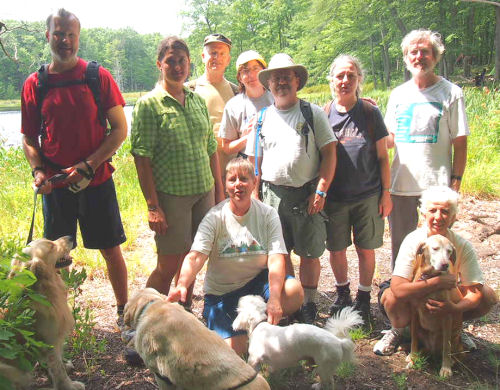 I'm now sort of one day behind on blogging. Today was my Dad's birthday. He would have been 108. I was planning to do a post about him, but I'm just too tired to hunt up photos and scan them. Maybe tomorrow.

Glad no one killed you over those extra miles :)

Wow, I'm amazed those dogs all walked 10 miles! I don't know if our dog could have managed that.

love that parade of hikers on the foot bridge.

You are awesome! Hiking 10 miles probably would do me in! Great group pic.