The World's Smallest, Most Annoying Roundabout?


Bad intersections never seem to have good solutions. When I was growing up, north of Ithaca, New York, the intersection at the bottom of Cliff St was called "the octopus." It had seven roads coming together, three of them down steep hills, and was a constant location for bad accidents.

Fifty or so years later, it's undergone countless redesigns, and I guess has fewer accidents, but if you don't know which road you want to get to, heaven help you to get from one place to another through there.

Locally, this isn't THAT bad, but well... Let me show you.

In Silver Lake, Michigan was an annoying intersection with only four streets, but they were not at right angles, and most anything that wasn't a street was the parking lot of a business including a gas station. It was pretty much "anything goes" for vehicles.

A couple of years ago, someone decided this was the solution. 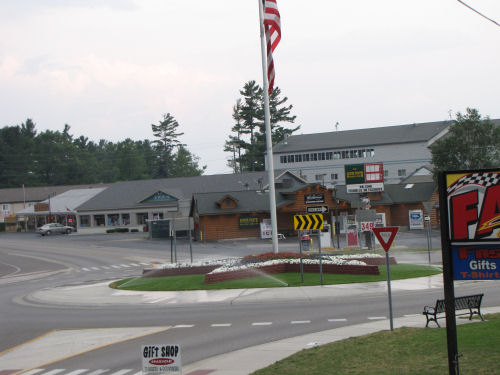 Yes, there is now a roundabout in place, also known in some places as a rotary. Michigan has VERY few of them.

So... drivers coming upon this little gem sometimes have no clue what's happening until they find their car propelled (hopefully) around (instead of across) a small circle.

First of all, this rotary is so small that it must be nearly impossible for delivery trucks to negotiate. Here's a car-level view as you enter. You can see that the straight-across street is only a small bump out of alignment. It must be the smallest street-legal size for one of these things. Anyone entering too fast would slam head-first into the flower bed wall. It's so small that you don't have time to put on your blinker to signal where you are going to exit, so no one bothers.

It's so small that the exits aren't marked, so you need to know where you are going.

The lovely decorative star flower bed is rather a lost cause. I've taken the first picture from the highest nearby point that isn't the roof of a building. That point is from a private park that isn't open to the public (I snuck in early morning, ya know.) I guess it would be attractive from an airplane.

I don't think this is one of the highway engineering successes of the century.

Just one more day of paper route and I'm thoroughly crabby and so DONE with it. I'm going to bed now.

Is this a positive post? I can't tell. I think of it (the roundabout) as something of a joke.

THe country just north of us as replaced all major (and many minor) intersections with roundabouts. Despite them being easy to navigate (in my opinion) and in use for about 5 years, it appears that most people do NOT know how to use a roundabout. Many get scared and stop at each of the exit points. Others don't let people merge. THen there are those who decide last minute that they need to exit the rotary and cross all lanes to do so. I think there is actually a roundabout in town that is smaller than this one. There was really no reason to put one in this spot as it was one street dead-ending into another -- at the foot of a bridge over the interstate. But there are pretty flowers in the center -- maybe that is the reason they built it.

We a smaller roundabout over here.

ours is smaller to be recorded in the book of Guinness.

England is full of mini roundabouts. They are mostly flat. Everyone drives straight over them anyway. Except the annoying people who do everything right all the time.
Cheer up buddy!

hello my quality day its dennis the vizsla dog hay i think dada hayts rowndabowts too their is wun neer us that is not only a rowndabowt but a fore way stop witch i gess is the wurst of both wurlds!!! despite this he is now singing abowt dooing the rowndabowt i hav no ideea wot goze thru his hed sumtimes!!! ok bye

must have been designed on a Monday or a Friday :)

Yes, the "quality" feature here is the humor. I went to GoogleEarth and drove through your roundabout just for fun. I suspect you find it less fun before daybreak.

There is a community a few miles south of us that has... wait. Did AnneCamille just describe the same place?

It doesn't look big enough to do the job properly. I wonder how many people go out of their way to avoid it?

Anne- I think they are a real hazard where people don't know how to use them.

rainfield- I hope you have smaller trucks!

John- so you guys invented them? I should have known

Dennis- thanks for the warning about dada!

vanilla- Well, early in the morning there's no traffic so it's no big deal. However, during the day this is a VERY busy place in summer. I simply avoid it

Lin- You have to make a detour of a couple miles to bypass it.

This only adds to my personal conviction that the world is hopelessly messed up.

You've managed to make this sound rather humorous, so I guess that yes, this would be a positive! You had me chuckling about the flower bed! must have been something to install!

Living in Boston turned me totally off to rotaries or "roundabouts" or whatever you call them...I have to admit to using a few expletives.

Living in Boston turned me totally off to rotaries or "roundabouts" or whatever you call them...I have to admit to using a few expletives.