Om just got home, so for sure I'm off the hook for the paper! I rewarded myself (assuming he would be home on time) by going to the Ramsdell Theater (Manistee Civic Players) production of Li'l Abner.

I'd actually never seen this musical before. Of course, I knew the characters from the comic strip.

I was concerned about being able to understand the words to the songs, and that was a bit of a problem, but most of it was ok.

Here, Li'l Abner tells his friends at the fishin' hole If he had his druthers, he'd be himself. 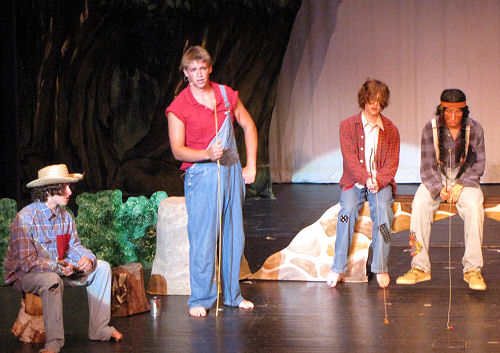 But Daisy Mae wants to marry Abner, and according to local custom in Dogpatch she has to first catch him on Sadie Hawkins day. Although Abner likes Daisy Mae, somehow he can't ever let himself be caught.

However, Marryin' Sam has a secret weapon. When men are exposed to the secret weapon they are rendered immobile! Mammy and Pappy Yokum (Abner's parents) want to use the weapon so that Daisy can finally catch Abner. 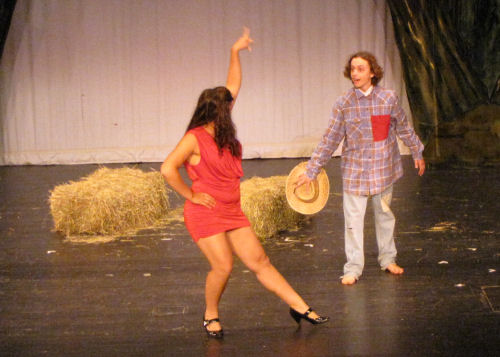 Meanwhile, Dogpatch has been determined to be the most unnecessary place on earth and it will become the new site for nuclear tests, and the residents have to be evacuated. The only way the town can be saved is to find some reason it's necessary.

It turns out that Mammy Yokum's Yokumberry Tonic, which she makes from the berries of one tree that grows only in her yard, is the reason Abner is so fit. He takes the tonic to Washington, DC and gives it to the President as his American Duty.

Meanwhile, General Bullmoose wants to find a way to make money from the tonic. He arranges for the beautiful and treacherous Appassionata Von Climax to catch Abner on Sadie Hawkins Day. Then they will kill Abner, and as his widow she will inherit the formula for the tonic.

The government begins to conduct tests on four flabby hillbillies with the tonic to find out if it really works on everyone.

The General enlists the help of Evil Eye Fleagle. At a ball for Abner and Appassionata he uses his evil eye to get Abner to tell the secret. But the ray is reflected off a shiny tray by Earthquake and it hits the General instead. He confesses that he is planning to do away with Abner. 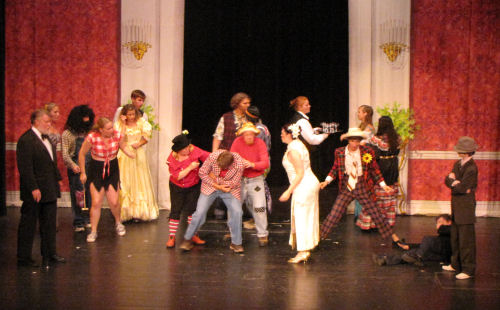 Of course, Daisy Mae has been busy too. She reluctantly has agreed to marry Earthquake McGoon who has been pursuing her, if he will agree to protect Abner from harm.

It turns out the tonic has an undesirable side effect (I'll keep a couple of secrets), and so the town is once again scheduled to be bombed as unnecessary. However, at the last minute it turns out that the statue of the local hero Jubilation T. Cornpone was a national shrine because he was such a bad leader for the south that he helped save the Union. Dogpatch is thus saved. 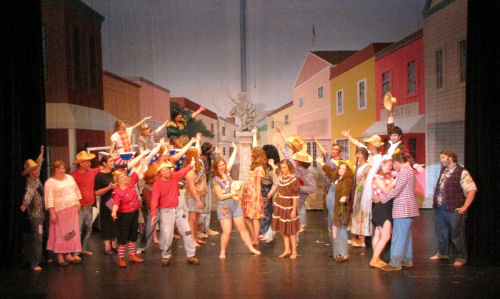 Of course, Daisy Mae is still promised to Earthquake... But, you know the story can't end that way. How is Earthquake persuaded to let Daisy marry Abner, and why does Abner suddenly agree? Marryin' Sam (in the mismatched plaids) gives them his $8 weddin'. 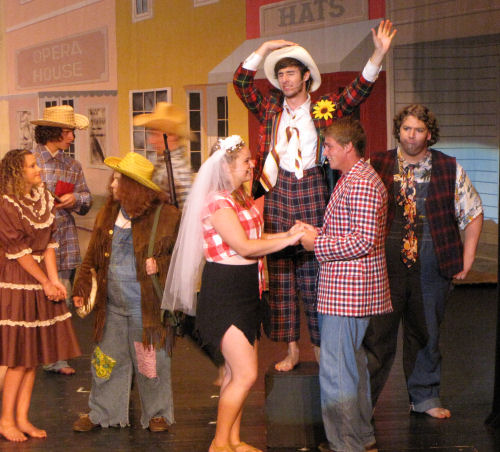 How was the production? It wasn't bad. It was more like what you'd expect from local theater than some of the others I've been to. Most of the main characters were high school kids who needed to work on their diction. The dialogue could have moved a little faster. It didn't really snap.

The absolutely best actor was the boy who played Marryin' Sam. He's only a high school junior, but has a lot of stage experience. The bio in the program says he plans on a career in theater.

Of course, Li'l Abner is one of those comic strips that changed society, adding words to our vocabulary and empowering women through Sadie Hawkins days way before the feminist movement.

This boy anxiously awaited the daily paper, mostly for Dogpatch and its denizens.

I've not seen the stage play, but I did see a rather bad movie based on Li'l Abner.

awww i would like to see this--i love theatre, even the local kind :)

I remember Li'l Abner. A nice treat for yourself.

vanilla- I haven't seen the movie. I think I can safely skip it.

Ann- my treats are leaning to the cultural type lately.

Lin- matinee, but yes, OUT

That makes me feel old, Joan!!