Remember the mystery tree? Before I was looking at this one carefully, I called it an ash based on its bark. That was in 2010. See (Not An) Ash- Left and Right Brain. But that month I was more interested in its beauty. It even appears on one of my avatars.

I've been trying to lure Robert up here for quite a while to look at it. So, he did. And I don't feel so dumb any more. Except that he agrees it's some kind of cherry, he's stumped too. 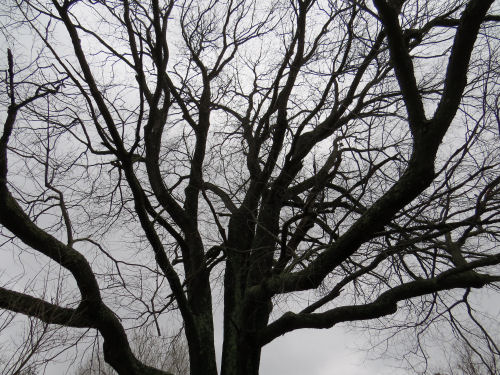 His best guess is the same as mine. It is probably some agricultural cherry that has survived the usual lifespan and has grown huge. 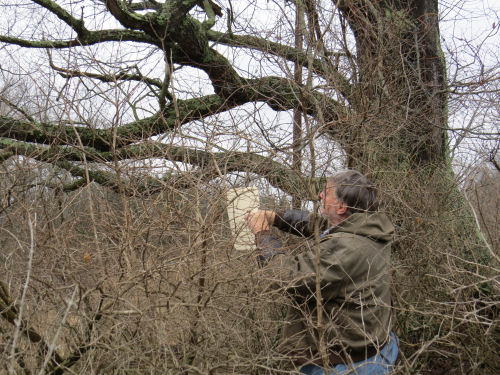 He took samples. He has specific keys to horticultural/agricultural trees that he can check at home. He did notice that it's a double tree and the two halves appear to have some differences. He speculated that it might have been a grafted tree. He also noted that it's near the railroad tracks. Sometimes specimen trees appear in odd places because seeds have been carried into the area on rail cars.

So, the mystery tree remains a mystery. But there might be some hope of figuring it out. It's certainly a beautiful tree.

That's interesting--two halves? I hope you figure it out.

Big, too. Don' you just love a good puzzle?!

That's huge for a cherry tree. Don't you love a good mystery?

Lin- yes, a tree with two stems when it was little, that grew together into one.

vanilla- I do! You know that

Chuck- yes, that's my excuse for not realizing it was a cherry tree for years.

Ann- we keep collecting the clues. Some day they will provide an answer.

It's pretty big for a cherry tree. I hope you discover exactly what it is...