Today was an awesome, fun, educational, wonderful day! I know they can't all be so nearly perfect, but having one every so often doesn't seem like too much to ask. Just WOW.

My buddy, Robert Bloye, came up from Grand Rapids. For the few of you who've read North Country Cache, he's the friend in the chapter named "The Ugliest Mile in Army Boots."

He's a real tree lover. He was working on a PhD in dendrochronology for a number of years, but for various reasons didn't finish (we commiserate a lot). Here we are in one of those ugly, distorted pictures that result from pointing the camera at yourself. Have a chuckle and move on. 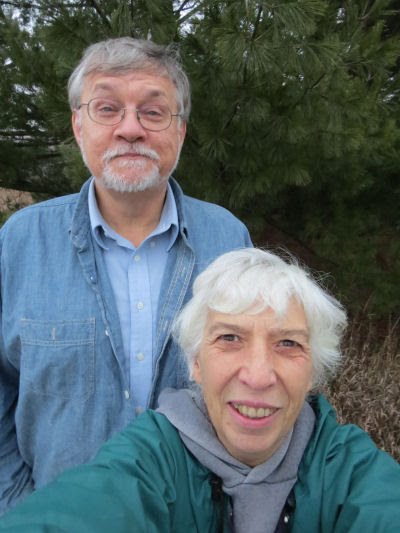 So, Robert came with the Michigan Botanical Society list of "big trees" in Mason County. The list includes trees which are supposed to be the largest five of each species reported in the state. It's generally inaccurate at some level. We set out to find out how bad! There were seven locations we wanted to check out.

We got lucky on the first one. We were looking for Malus sylvestris, common Apple. We found the address (some information on locations was better than others too), and the lady who lived there pointed us to the tree and said we were welcome to look and measure it. Robert is in the picture for scale. That is one big apple tree! 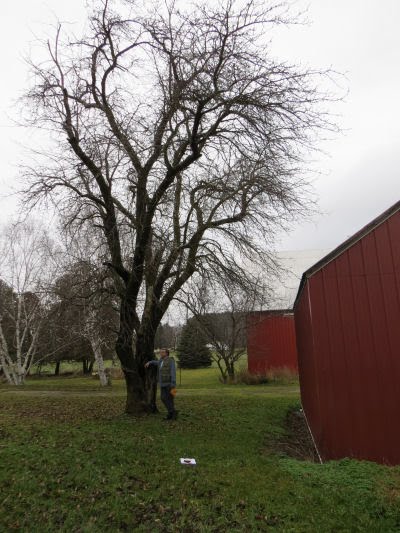 Measuring means to do three things: 1. get the diameter at breast height (DBH), which has been defined as 4.5 feet above the base. OK, so it's my eye level. Foresters who developed the system were more often Robert's size. 2. Measure the spread. This means to measure out from the base to the drip line. Get the largest and smallest values and average them. 3. Determine the height. This is simple geometry. Measure out some distance and get the angle to the crown, which is done with a clinometer. The next picture shows Robert using one. 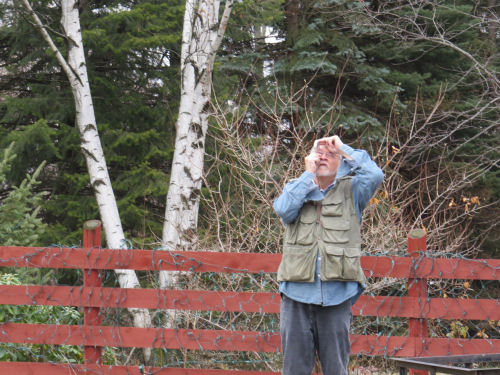 The next stop was looking for an Oak-Leaved Mountain Ash. That was sure to be one that was planted as an ornamental. It's a hybrid I've never even seen, and I still haven't. We think we found where it was... a bare spot in someone's lawn. But no one was home.

Then we looked for a White Poplar or Aspen. I have one of those on my property. The link will take you to that post. We found a cluster of them, some a foot in diameter, but nothing resembling the size reported. Mine is bigger than the ones we found. No big stumps. Who knows how that site got reported.

We were hopeful of the next on the list because it has to be planted, and was probably in someone's yard. Sure enough... and this was another brand new tree for me, Juglans regia, an English Walnut! We spotted it in an instant when we were close because it doesn't look like any normal trees around here. 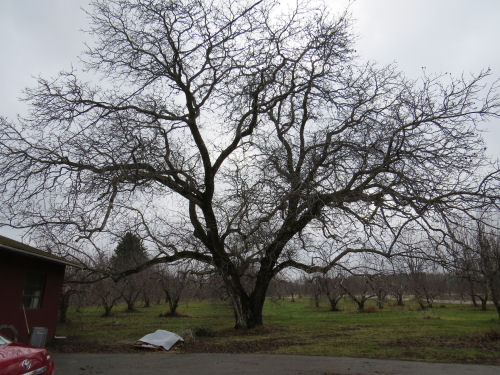 After that, we searched for a tree neither one of us expected to find. And we didn't. In the first place, we don't think these trees ever grew around here. In the second place, there are so few of these trees living, it was silly. But we hunted for a reported American Chestnut, which were almost all killed by a blight by 1950. No tree, no stump.

Next stop, lunch at House of Flavors! We had yummy sandwiches, followed by ice cream. Two more trees to hunt for. The results of the next search were mixed. We found the tree, but are pretty sure that it was IDed incorrectly. It was supposed to be a Sugar Maple, but we think it's a Norway Maple. I'll go back when there are leaves and flowers to be sure. However, it is b-i-g! 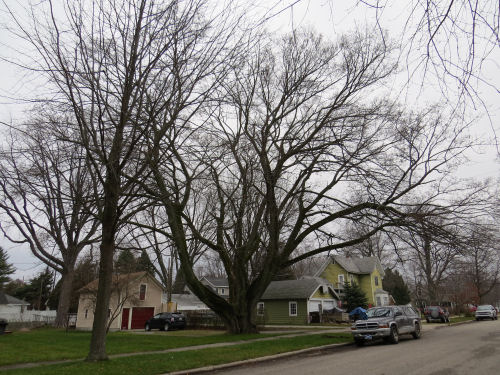 Last, we looked for a large Serviceberry. Large was defined as 7" diameter. These trees just don't get all that big. We found the stump. It had been cut down. The homeowner probably had no clue it was an important tree.

We did a couple other fun things too. Maybe I'll be able to show you more another day. But I'll stop for now before you are too overwhelmed.

Again, what a great day!

What an interesting outing, the kind of day I would enjoy. Oh, I just did; you took me along, so to speak. Thank you.

Vanilla- we would have been happy to have you along. Real world or virtual.

Ann- Always a good thing to do with a friend who loves chasing down trivia and being pedantic about it.

It was a very interesting outing. Thanks.