Once again, I'm going to play along with Chuck's Family Friday. I don't think I'll be doing this every week. However, on my recent visit to Chuck & Sylvia's I asked him to show me how his genealogy notebook was organized. He introduced me to the Ahnentafel numbering system for tracing a family tree backwards.

I can't afford to get hooked just yet. Why, you ask? Because when I start, I'm going to want to really be serious about this. I already know quite a bit about some of my ancestors, but I'd like to learn more, and get all the pictures and memorabilia I have organized.

Meanwhile, I share a picture with you that I treasure, even though I only have a small digital scan of the original. It was sent to me by the daughter of one of my mother's cousins. I have no idea what that is called. I just Googled it and of the top ten answers, I got three choices: second cousin, second cousin once removed, and third cousin. So, she's one of those! I haven't seen her since we were children. (This is not the even more distant cousin that I am in touch with.) 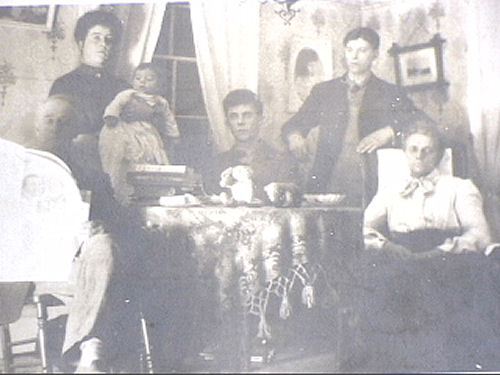 It was taken in 1907. I can figure that out because the woman standing is my grandmother (Granny), Emily Marguerite Fisher Rowe, and the baby she is holding is my uncle Jacques. We have lots of pictures of those people. However, the rest of the picture is quite remarkable.

First of all, notice that it's quite a casual pose. Snapshots that were less than formal occasions were just coming into vogue.

The seated man with the newspaper is Granny's father, Charles Alfred Fisher, and his wife (also seated) is Catherine Louisa Hall Fisher. She was an amazing woman. If I get hooked on this, I'll share more about her. The boy at the table is Lewis A. Fisher. My grandmother was the oldest of four children. She was born in 1882, and Lew in 1886. That would make him about 21 here. Ben, next born, is not in the picture because he ran away from home when he was 14. The youngest is Charlie, Charles Henry Fisher, born 1888, so he's 19.

I don't know for sure, but I think the picture might have been taken in a house in Spencer, New York that is still standing. I'm guessing it's Charles and Catherine's home, since they look as if they belong there, and because the boys are also there.

Lew is the grandfather of the cousin who sent me the picture.

Charles Alfred would have been 56, and Catherine 49 when this was taken. I have some unlabeled family pictures, and I'm hoping maybe this photo will help me ID this couple in some of the others.

Hooked, that's what it is. One gets hooked on genealogy.

It is wonderful that you know the participants in this photo experience.

Hooked, that's what it is. One gets hooked on genealogy.

It is wonderful that you know the participants in this photo experience.

What Vanilla said. It's like solving a mystery. First you find clues. These answer questions. The answered questions seem to multiply, with each leading on to a few more questions.

If you closest common ancestor is a great grandfather, you are second cousins. The "removed" describes a difference in the number of generations to that common ancestor.

One of our hobbies has been family history,strange how it started - in 1988 I went into a second hand furniture store to purchase a large table, no I never did buy the table but I came out with three old photo albums, this was a quest who where these people and why had these family treasures been in the shop. This led to our own family discoveries and still a continual quest, the family in the albums yes we found lots about them and met many of the extended family, let me tell you the £1.50 we paid for the albums have given us lots of pleasure in the search and even more in the friendships we made along the way. We were hooked and still are.

Interesting to learn more about ones family history. Sometimes surprising facts can be dug up

Wow this is really interesting. I love the photo.

I have an old album loaded with old pictures like this. But, I don't think I would ever find out who they all are unless they're marked on the back.

I am adopted and I do know how very important having this knowledge is. I only have pictures of my adoptive family.

It's a long story and I don't want to get hooked either...but, I probably will!!

You watch...you're hooked now...it's going to all be Chuck's fault!

I know so little about my family history. My mother really did not know most of her relatives and neither did my father. It's wonderful that you even have this photograph and can identify the people in it.

VERY cool photo! I don't have old photos like that, so I appreciate those that you and Chuck post.

I'm not into genealogy, but I know my mom and uncles are these days. I think it takes a lot of time and work to track it all down.

vanilla- I already am hooked, just have to restrain myself for a while longer

Chuck- that almost makes sense. I think that makes me and Jean (the one I'm in touch with) a third cousin. Great-Great Gparent in common. But I have to check for sure

Carole- now that IS a strange story... to get hooked on some unknown family first!

Ann- I love it when I learn something new, because we have quite a bit of info.

Jackie- we have some adoptions in our line, and all my kids are adopted. It does complicate things. I hope you can figure out some of your pictures

Carmen- that is the state of things with Omer's family. We have scraped up a few bits of info and some pictures his mom had that we had never seen before she died. It's too bad when families feel they have to cover stuff up. Even the tragic stuff is a part of the collective history.

Lin- NO old photos? Oh pally, I wish for you some to be bestowed by the mom and uncles.