I suppose most of the rivers I show you look pretty much alike. But you've never seen this one here before because I was sent east to do cases out of my area this week.

This river is about 13 miles long and is located in Osceola County. It's a tributary of the Muskegon River. It, and the town of the same name, were named for Nathan Hersey, the first white settler in the area. He came in 1840. Two other quality events occurred as part of this same work day. I came as close as I ever have to getting stuck with my AWD Forester. Managed to dig out and get out of that not-quite-a-road.

As a result of that incident, the Anti-Lock-Brake light came on and stayed on. Manual said if it stays on for about two minutes it's recharging its battery. If it stays on longer, your regular brakes will still work, but you need to have it serviced. Said a few prayers and after the next time I turned the engine off the light went out! Whew!

Finally, the surface of the river had some great ice patterns. I love stuff like this! 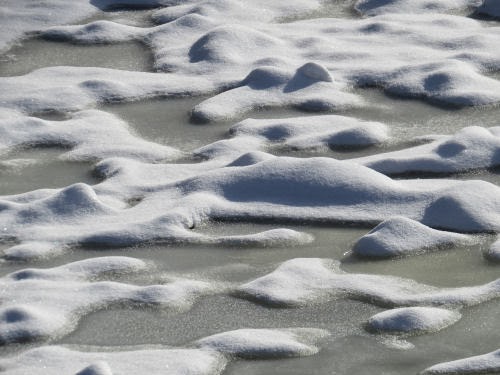 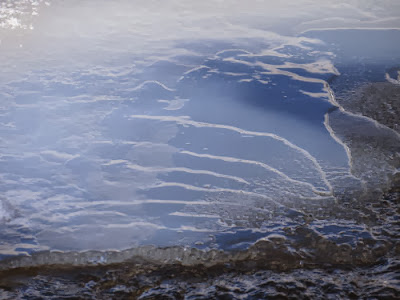 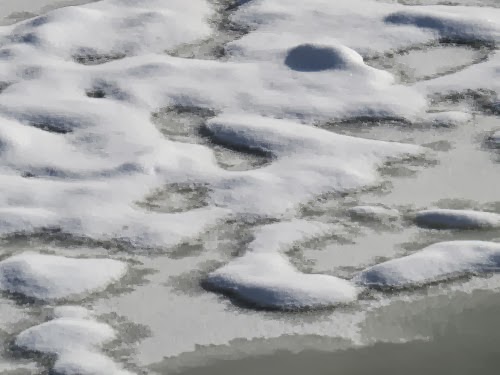 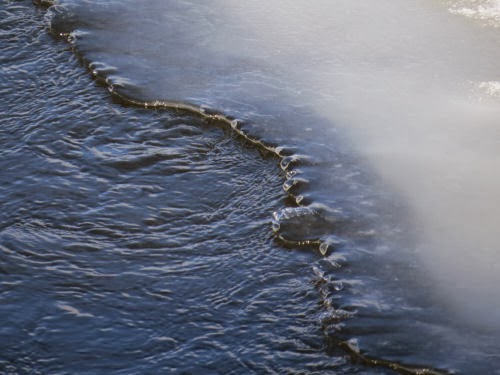 Posted by Sharkbytes at 9:27 PM

Looks like a pretty area. Glad to hear that light went out. I had one come on a couple weeks ago had no idea what it was for. Ended up being a light to tell me that my tire air pressure was low.
Very cool patters with the water and ice.

Gorgeous photos, Joan. I love the patterns made in ice, too. Fascinating! Merry Christmas!

Great photos Joan, it looks beautiful, the snow is a favourite although I hate walking in it now :)

You do find the most wonderful things to photograph, Joan. Almost makes almost getting stuck on the road worthwhile.

hello sharkbytes its dennis the vizsla dog hay wow that is a skarry adventcher in yore forester!!! my dada never got stukk ennyware bak in the mithikal land of noo york with his subaru owtbak sport eksept the wun time their wuz ice under the snow and when he tried to brayk the kar just kept going and almost ended up in a swamp!!! ennyway the ice on the river is mutch prittier then ice on the rodes i think!!! mary krismas!!! ok bye

Ann- who knew there was a light for that?

Aaron- thanks for commenting! And a Merry Christmas to you too.

Carol- it can be difficult without snowshoes

Jean- I try to hunt for nifty stuff!

Dennis- yes, tell your dada that as good as the Subarus are, even they don't do well with ice. Swamps are fun, but not in cars.

Getting stuck is never good. Glad you managed to get out of that jam, I hope that your breaks are okay though!