The project for today was a bit of a stretch, but it had to happen, and for complicated reasons it had to happen before the end of May. I could not do it alone. The shed that was attached to the barn was collapsing, and threatening to fall in the driveway. The winter was not kind to it, making the job more difficult (and yet, it hadn't collapsed under the snow, like several newer buildings I've seen in the area).

Here's what it looked like when we began today. I had taken off some of the facing boards that were loose and falling at inappropriate times (is there an appropriate time?), but realized I needed help. 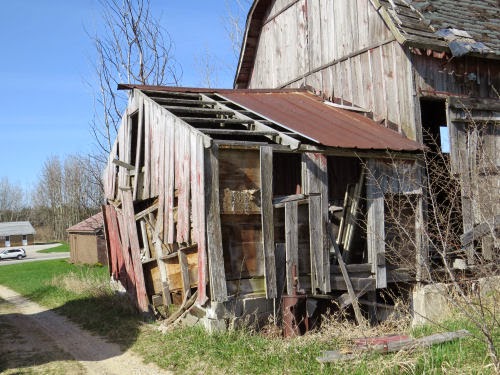 Friend Jesse came over today, and first we had to empty the space of a lot of stuff. We looked it over and realized that there was a beam solidly resting on the ground making it more stable than it looked like. The thing you probably can't tell from the picture is that what you can see is the second story. There is a big open space under this with almost completely collapsed foundation walls. I was the lightest, and the one who needed to make decisions about what was worth saving, so in I went. The answer was, way more than I thought. I was under the impression I'd cleared most anything of value several years ago, but we hauled out a lot of stuff. Then we began working at whatever was loose until we began putting forth theories about what was holding the silly thing up. Looks pretty precarious, right? Wrong. 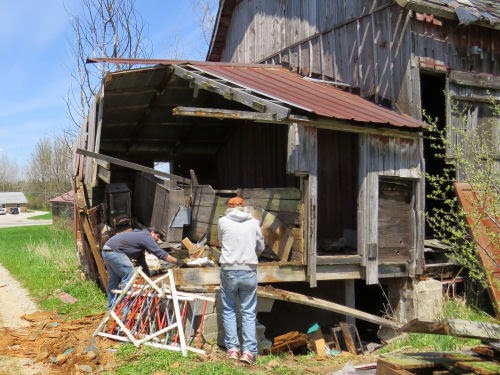 Several times we attached rope or chain to something we thought was significant, fastened it to my car hitch and gave a pull. The most common occurrence was that the one board would pull off, leaving the rest of the building intact. It got to be a joke. We could not make this building fall down. Twice I (carefully) went back in and we cleared more stuff, just to give us room to work, or salvage something newly discovered under piles of trash. That building was unrelentingly solid. Jesse said it was defiant!

We began at noon, and at around 4 pm, we had made it to this point. Is Jesse praying that it will fall down? 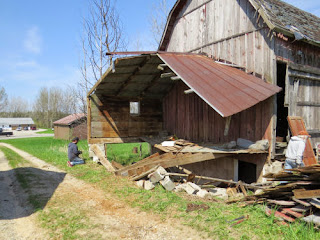 We did pray for safety before we began, but actually he's tying a rope through one of the remaining corner foundation blocks. That front wall just would not budge. 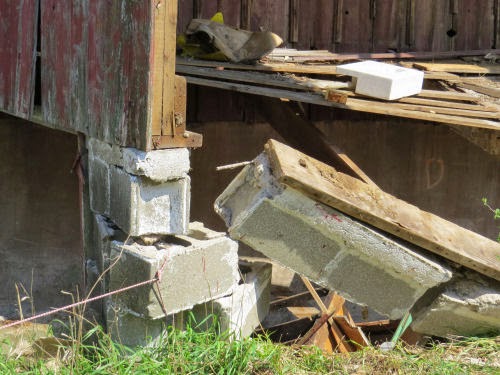 We fastened it to my car again, and... pulled out one block, but the wall insisted it was staying put. 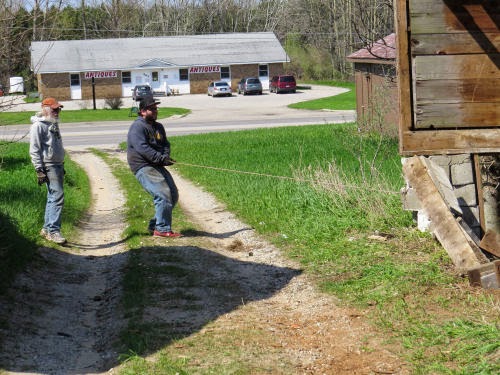 We were in the process of doing it a third time with the car, when who should pull in the driveway, unexpectedly, but our buddy, Josh Schuyler!

He's a no-nonsense crazy person, who happens to own a tow rope. The chain we'd been using was way too short, but it was all I had. Josh ran around, got the extension ladder, threaded the tow rope over the top sill of the wall, and we hooked up the car again.

Took two tries, but *!BAM!* Can you see that front wall pulled out against the dead tree? 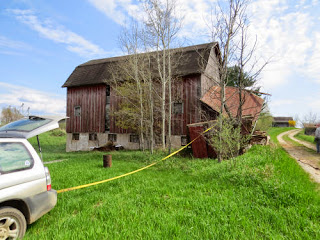 But the problem was that the roof and parts of the trusses were still hanging. If we'd had any tiny bit of an idea about how solid this building still was, we'd have gone up on the roof in the first place and started demolition from the top down, like sensible people. But we assumed that collapse was imminent, until we tried to make it happen.

At that point the question was, "How to get the roof off?" The truss that is flat against the barn wall wasn't going anywhere. I and a guy named Jim, personally, bolted that to the barn a long time ago. We fastened Josh's tow rope to the outer truss and decided to all pull on it, by hand. We assumed it would accomplish just what we had managed so many times already. That one board would come loose.

We pulled. We pulled hard. A mighty creak was heard, and Josh and Jesse went heads over petticoats (so to speak). I wisely (smirk- or luckily) let loose of the rope just as the tension shifted and something came down. When everyone caught their breath and looked... THE JOB WAS DONE! It was an unbelievable ending to a project that tried to thwart our efforts at every opportunity. 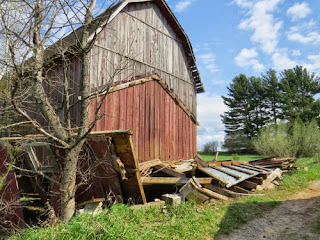 Here's the happy crew- please notice that we have all our limbs and eyes and smiles and other useful body parts. We were careful. No lectures after the fact, please. 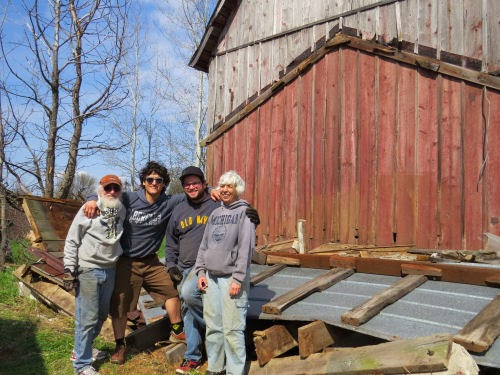 One small bittersweet moment, but I can deal with it. This is the frame of the crib that was my half-brother's, then mine, then our Steve's. Vintage about 1925. It wouldn't even be legal to use anymore, because of those widely spaced slats. I took its picture and said goodbye. I'm sure no one but me even cares. 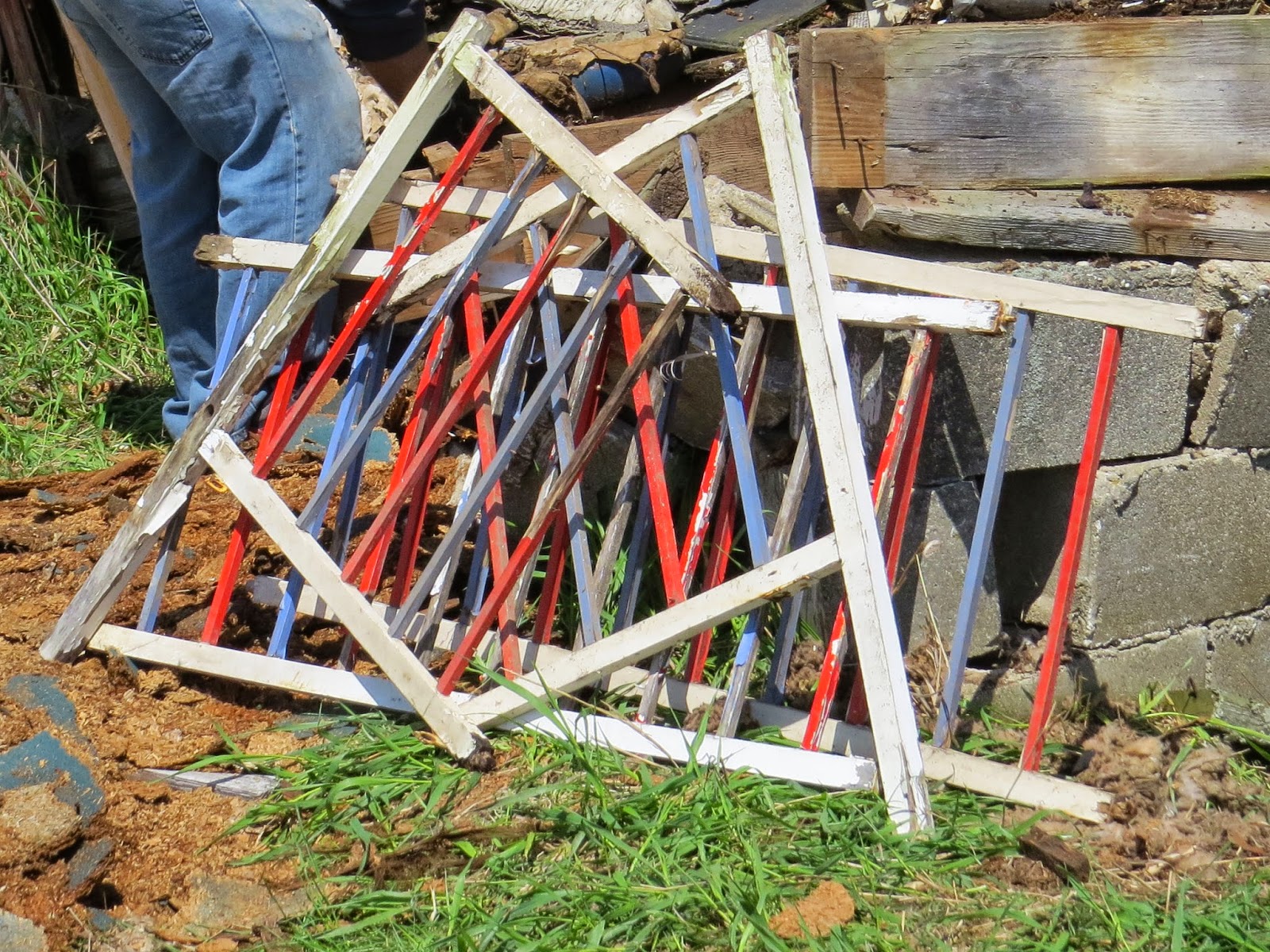 Obviously, still a lot of cleanup to do, but we've conquered and tamed all the potential energy in locations above the ground that were threatening havoc.

Can you say "accomplishment?" My Quality Day, brought to you by Jesse, Josh, Om and Joan. We should have had someone to video the last part of that act, but since we certainly didn't expect much to happen, we might not have even turned the camera on.

Hooray!!! Perserverance, patience and people power!! Happy you were able to rescue some things besides finishing a major project.

That is really a difficult job, that I would not like to do.

This comment should come out more than 5 times in order to salute you.

that shed was certainly built to last and wasn't going down without a fight :) Good job completing the project

hello sharkbytes its dennis the vizsla dog hay wow they dont mayk them like they yoozd to do they??? wen dada deesided to tayk down the rat infested dollhowse type shed in owr yard he did it with a krowbar and a hammer and that wuz just abowt it and soon all he had wuz a pile of timber and sum leftover roofing tiles wot he has yoozd here and their to reeplayse broken tiles on the howse!!! ok bye

Well that was quite the adventure! Whudda thunk that shed would be so difficult to drop?

Good grief, what an exhausting day you had. It sure is nice to have a friend - or two - on a project like that. It seemed like it would be fairly easy but that really wasn't the case at all! Job well done.