It's been a while since I did kitchenhenge. Since Spring 2011 to be exact. That may be so long ago that I need to explain it again. Basically, it's a chance catch of a lot of improbabilities. For one thing, I have to be up at sunrise. Ugh. It has to be either an equinox or solstice... or pretty close, because the other thing is that there can't be so many clouds that the sunrise is invisible.

Then... I stand on the top step to my kitchen door and take a picture of the sun coming up. Over time I marked one tree as a reference point, and you can see how the sun has moved in relation to a line through that tree.

And since I last did this, they've put up a huge new bin and the space station, er... grain elevator. That changes the way things look a little bit.

The good sunrise was on Dec 20. I had just arrived at the kitchen sink when it happened. I couldn't get the memory card in the camera and get to the step fast enough. Then on the 21, the actual winter solstice, there was complete cloud cover. This morning, well, meh... I even put a yellow arrow to help you find where the sun actually is. But it's south of the grain bin.

This picture is summer solstice 2009. So if you can line up the red lines in your head, you can see how far north the sun is on the first day of summer.

This post took a lot of time because I had to find old pictures that had disappeared from the blog because I used to host my own pictures. I'm slowly working at getting old posts updated so that the pictures show again. It's an annoying and tedious job. Anyway, some of the kitchenhenge posts are fixed.

The sunrise was actually much more noteworthy before the sun appeared. 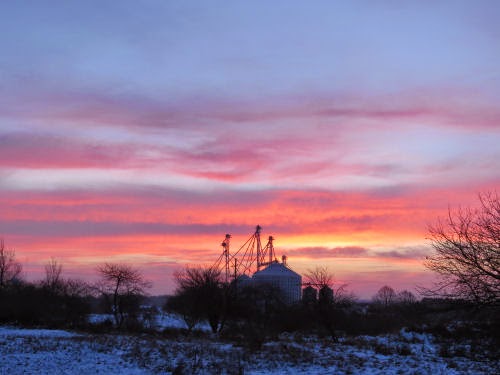 And for fun... explain this. Every one of the three mornings this week that I was looking at the sunrise, the flock of pigeons that lives near the grain elevator was flying in a circle to the south of the big bin. They would go out and turn and come back and turn over and over and over. I used no commas there, because they didn't use any in their circling. 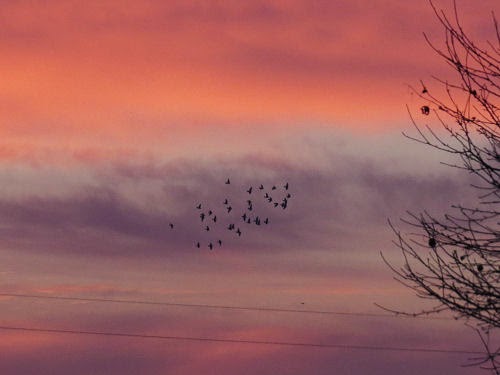 That 's a good way to do it. I've noticed the same thing here, but never got organized enough to pick a reference point.

I like how you did these pictures for comparison. I rarely get to see the sunrise since I get to work before the sun comes up

I enjoy your kitchenhenge pix. I do my comparisons at sunset. There are two reasons for that. One, I'm rarely awake at sunrise. Two, our barn blocks my view of the rising sun.