I slipped a little hike into today. After I did cases I had a little more than an hour of daylight left, so I went to Pine Valley Pathway. There was crusty snow on a lot of the path, slowing me down a little, but I walked about 2.5 miles.

A very few of you readers have been here since early times. The winter of 2008-2009 really lent itself to good pictures of animal tracks. I suppose it was a combination of fresh snow over crust and warm spells that kept the critters awake. We did lots of tracking pictures. Since then I haven't shared many tracks at all. That's not because I've lost interest, it's just there wasn't much to see except deer tracks. 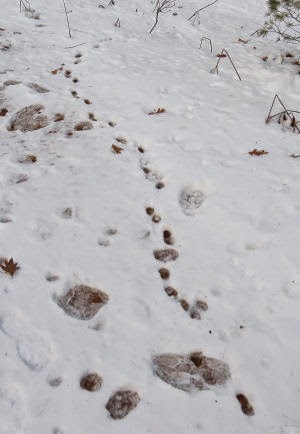 
The shape of each foot shows up well in this post hole print. I didn't see the skunk, however. 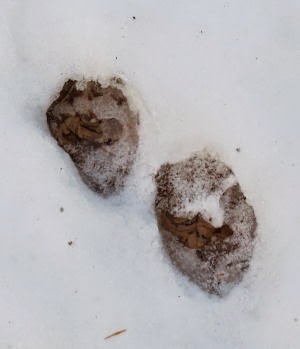 The one animal I did see was a black squirrel, but didn't manage to catch its picture. I found some nice tracks though. And if you recall anything from all the squirrel track pictures, you should tell me right off the bat that there is something wrong with these. 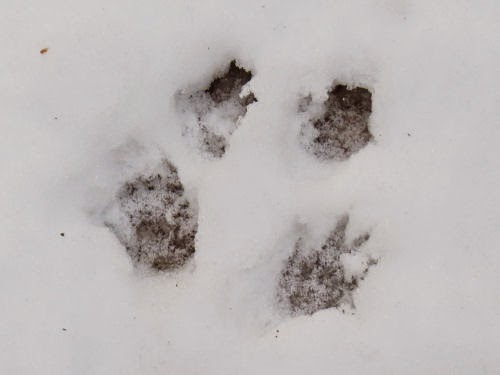 I'm always telling you that the larger hind foot prints should be ahead of the smaller front foot prints because the squirrel runs in a hopping motion and puts its back feet in front of its front feet. In this picture it's the other way around.

Well, let's put this set of prints in context. 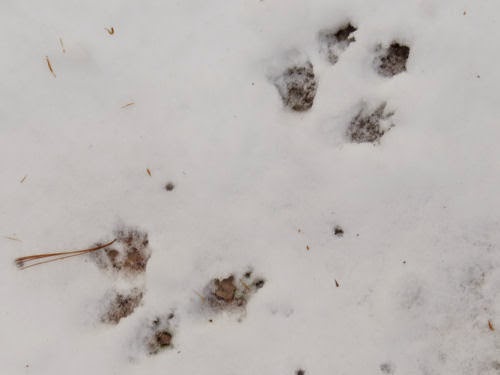 Squirrels, just like people, sometimes stop and look around, or eat a nut, or whatever it is they might want to do. This set of prints is really close to a "normal" set. The squirrel probably just took a short step, stopped and then put his front feet down in the snow.

I like the skunk prints--I've never seen those before. Thank goodness! We were overrun with skunks about 2 years ago--the neighborhood was stinky all summer.

You walk through the woods and picture the progress, stops and starts of the woodland creatures that preceded you. I would walk there and be all like "Oh, look! Tracks!

I would much rather see skunk tracks than the actual creature. That's one smell I can do without :)

I also think that you might not come off too well face to face (or tail) with a skunk. The tracks are interesting though.