I always love to learn new plants, and I found several at the Philadelphia Flower Show. I'm sure there were more than several that I didn't know, but sometimes the labeling isn't so good, and some plants just don't catch my eye. Solanum quitonese sure did. Common names are naranjilla, or lulo.

If you are a botany person, you realized right away that this is a Solanaceae, related to the tomato, and deadly nightshade, among many other plants. The flower is easily recognizable. 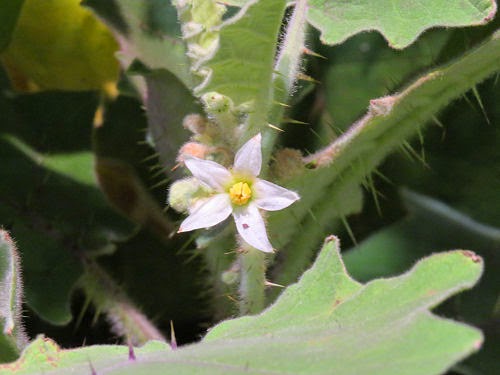 The leaves are pretty similar to nightshade, too. Except for one "little" detail. Can you see it? 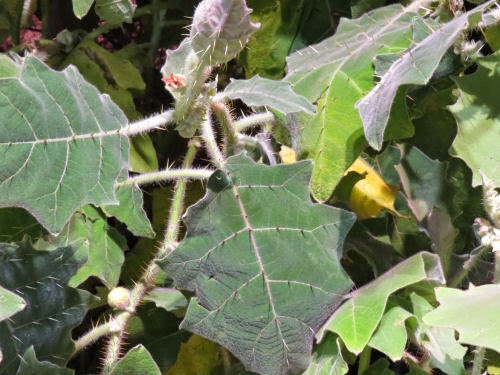 It doesn't show as well in that picture. Let's try another one. Look at those "hairs!" At least that's what Wikipedia calls them. You aren't supposed to touch the exhibits, and for some reason I obeyed the rules this time, so I can't tell you if they are soft or sharp. They are certainly impressive. 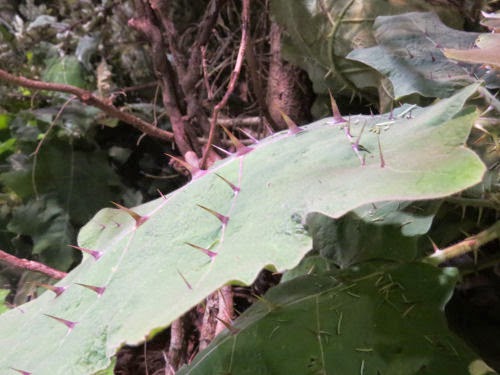 Did you guess from the name that it's South American? It does grow in the area around Quito, Ecuador. The fruit looks a lot like a smallish tomato, and is supposed to be tart with a taste something like a cross between rhubarb and a lime. Some of the related plants are poisonous, but this one is edible, and is used to make a drink, when sweetened.

Apparently, there have been efforts made to grow it commercially, but the plant doesn't do well in cultivation, and the fruits are very fragile and don't ship well.

It prefers semi-shade, but can make a nice specimen plant in the right climate. I don't think Michigan is going to be it!

I'd sure love to taste the fruit, though.

You are very obedient this time.
And score 100.
And the plant feels so good for you can tell so much of it.

I admire your self control when it came to not touching the plant :)
Those hairs look like they would be pretty sharp. A cross between rhubarb and lime sounds like an interesting flavor

Now you have me wondering if it would thrive here. Well, not under my care; I can scarce raise tomatoes, and they are a cash crop in this neighborhood.

Having lived in both places, I can assure you that Michigan is not at all like Quito, Ecuador.

rainfield- The plant looks like something from a nightmare, but I like it... sort of outscale for a stage setting.

Ann- I often touch anyway. Not sure why I was so good this time

Chuck- yes! Have you eaten these?

Solanaceae is such a fascinating and diverse family (but ... they all are). Love those 'hairs" ~ the plant looks to be very protective.

Of what?
There's the questions!

Very interesting. I'm glad you go to find out all this stuff for us!