This was another of the classes in the Standard Flower Show- to create a house for a movie dog. I don't recall ever seeing this class before at the Philadelphia Flower Show, but I could be wrong.

There were six entries, and the one that was the most popular with attendees only took an honorable mention. It was a great interpretation of the idea, and would have done much better, if... The builders would have remembered this is a flower show, and the plant materials can make or break a good entry. It simply didn't have enough.

Here it is: "A Beagle's Dream," of course referring to Snoopy, and done by a group. I'm going to copy the "intent" portion of the entry because it, too is so creative. "He chases this dream just as he has been chased through the skies. Bit parts have come his way, but being the lead dog on the silver screen has eluded him. Crashing into Hollywood, collecting that elusive movie role, earning thunderous applause from his fans. Perhaps the dream has landed."

The judges said: "Wonderfully executed, extremely creative. Needs more plants overall." And that is the difference between honorable mention and a possible first place. 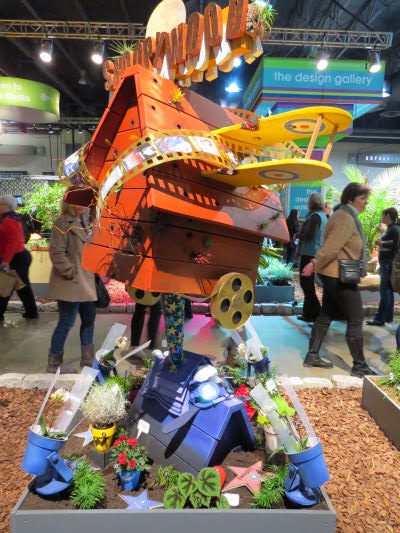 Third place went to "There's No Place Like Home," with a house for Toto, put together by a high school. The judges said: "Terrific interpretation of movie. Wonderful attention to detail. Doghouse should have looked more like a doghouse, less like a planter." 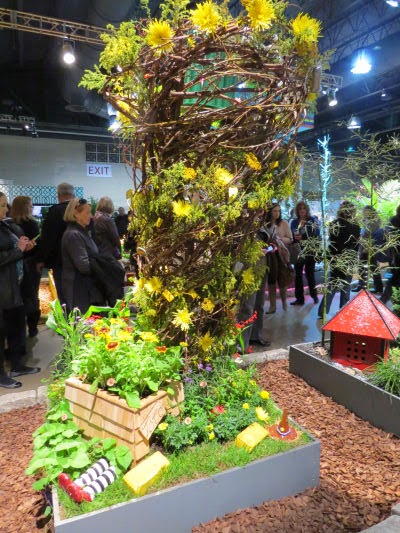 Red, second place was captured by "Tramp's Hideaway," created by a group. The judges said: "Extraordinary use of plant material enhances the overall design. However, certain elements exceeded the space." By that, they mean that the exhibit did not fit properly into the space allowed. Apparently, I didn't come home with a picture that would tell me what, but perhaps the pine tree was too tall. If you take a look, you'll see that each entry has a vertical element, so that was probably part of the challenge, to have a dog house, and a tall part of the display. 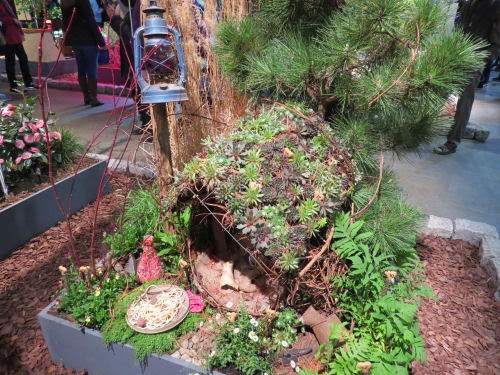 The blue ribbon want to "Asta, the Dog Detective," created by a garden club. Younger readers (do I have any?) might not know this dog. He was a wire-haired fox terrier belonging to Nick and Nora Charles. The Thin Man films of the 1930's were detective comedies, and Asta was hugely popular, appearing in all the movies. The judges said: "Superlative execution of a classic movie. Admirable overall design. Imaginative use of plant material." 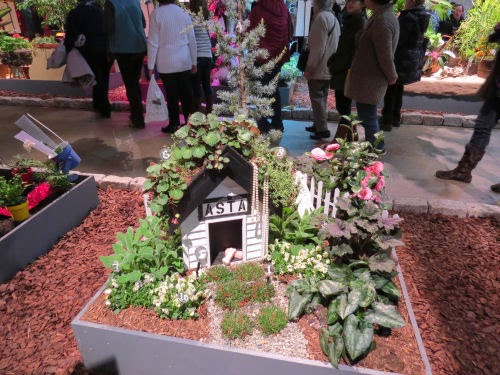 I really liked this class of displays, and loved the great variety in the ideas. The two others were very colorful, one was like a feeding table made like a house with a formal bouquet in the top. Weird. And I don't think it used a particular dog. The other one was for "Hachi, A Dog's Tale." It did not include enough plant material, either.

Posted by Sharkbytes at 9:03 PM

Flower show gone to the dogs.

It's a joke! These are quite interesting, actually.

A very interesting class. A popular one with dog lovers I'm sure

I wasn't born until 1940, but I do enjoy Nick & Nora Charles and, of course, Asta. Those were fun movies.