As you can imagine,displays with water features are hugely popular. I love them too. Even better when the water is moving, right?

So, tonight, I am plucking five fountains from various displays to show you.

First up is a formal fountain. This isn't related to any movie theme at all. The US EPA did a showcase formal garden with native plants to demonstrate what can be done instead of high maintenance lawns. This was the centerpiece. I really like the contrast between the dry and wet rocks. I think there's a design discontinuity between formal design and natural-looking native plants, but nevertheless, that's just semantics. It was a nice garden. 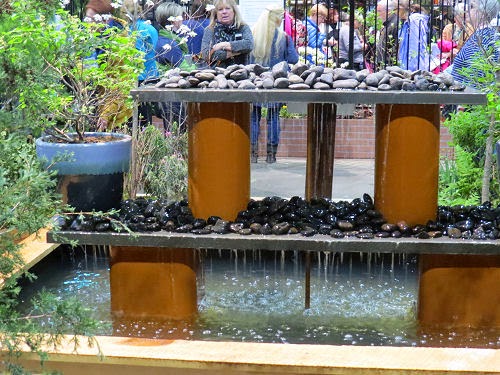 Instead of right angles and formality, Alice in Wonderland was flanked by two informal fountains from the Mad Hatter's tea party. The water cascades from pots and cups. I like how the structural helix is also the pipe for the water. You may recall that this exhibit was created by a high school. 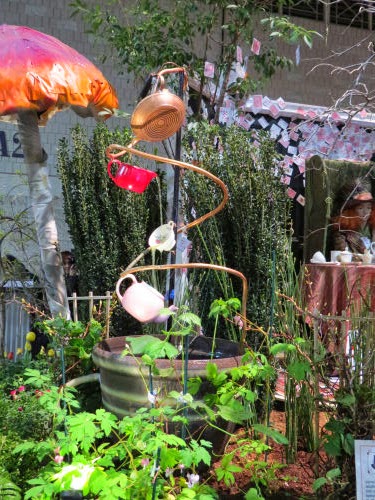 This next one is part of the Tarzan exhibit. I wasn't quite sure who would have piped water into a pool in the jungle, but it the light sparkled off the water nicely. 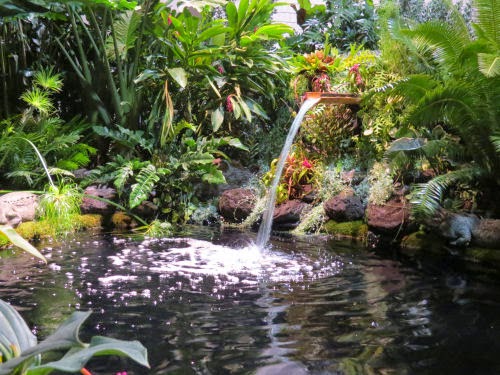 Disney's Maleficent was the inspiration for this display and the fountain. Lots of curves and organic lines. The lighting also helped make it very dramatic. I may show more from this exhibit another day. Finally, another application of a simple bit of piped water. This exhibit was supposed to demonstrate how people might have to alter their living spaces if the predicted rise in coastal waters floods many cities. There was a "house" perched on a water feature. 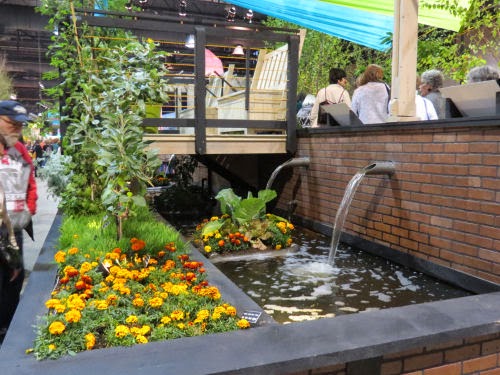 This year, the show's designers seemed to reduce the size of the major exhibits to make the aisles wider. This was probably a good thing. In past years it's been so crowded it was hard to move. However, this did cut down on the number of long reflecting pools, "rivers" and spectacular water features.

For sure, each year is different.

Love those water features--particularly what the high school students did for theirs.

There is something compelling about moving water. Perhaps a metaphor for life?

Great fountains. The sound of running water in a fountain always has such a calming effect