Archaeologist for a Day


I got to play archaeologist today (and will once next week too). The North Country Trail has to do a re-route, but the area where it's going to be put is a prime site for possible cultural artifacts, and it's in the National Forest, so it has to be surveyed.

This is such a big job that the forest agreed to let volunteers help.

Yesterday the site was marked off into transects and units for a total of 110 sites that have to be checked. Here's how we checked them.

First we found the marker, placed yesterday, for a unit and cleared the surface leaves and twigs from the area. 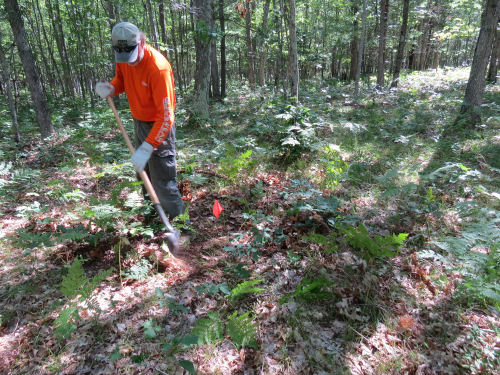 Then we began digging a hole about 15 inches in diameter and two feet deep. Soil has layers, and we tried to bring up one layer at a time. The dirt was placed in a sifting screen where another person shook or worked the dirt through the screen. 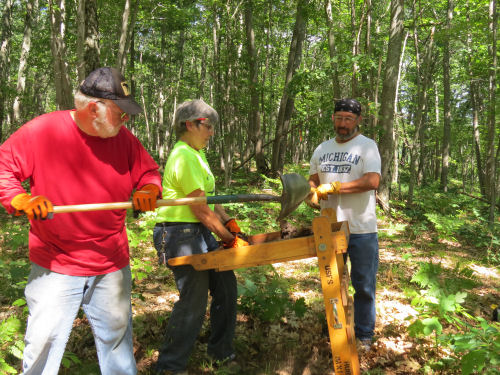 We removed roots and organic material until just the hard stuff was left. Since we didn't find any bone or pottery today, for us that meant rocks. 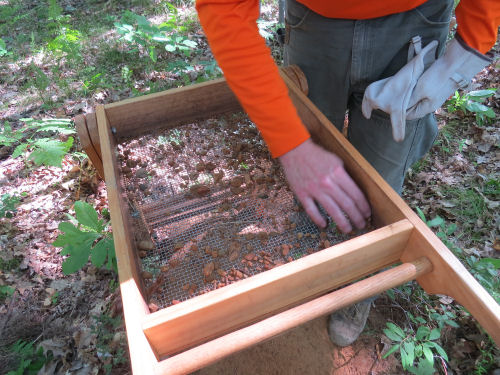 My team found six pieces of worked chert. I know the other team found a few, but don't know the exact number. Here is one of our finds. This is called a secondary flake. It has some of the outer surface of the original rock on the edge, but has sharp split sides where the person chipped it off whatever they were making. 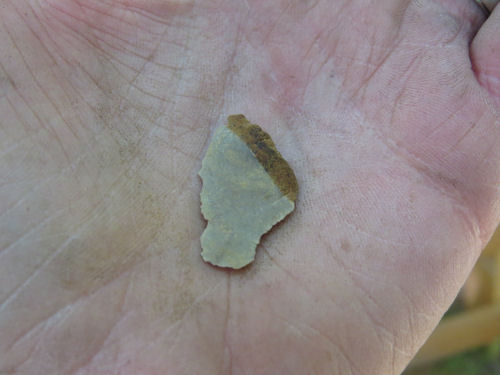 Any time something was found it had to be bagged and tagged. We noted where it was found and at what depth. 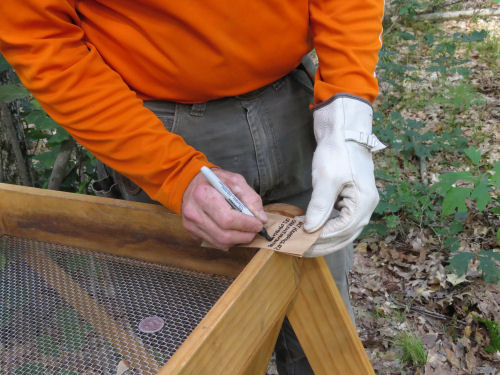 This was something I'd never done before and it was very interesting. I have to say that digging holes all day is a good way to come home really tired. I worked with one other person, and we did eleven holes.

We also found some grubs, a couple of sort of petrified shells, and a rock that looks like fossilized coral but it was white. I have to check on that. I've only seen gray coral fossils.

So far, none of these finds is so astounding that it is going to prevent the trail from being moved here. That is good. Although it would be really exciting to find something more interesting, we need to put the trail here because erosion has forced it onto a road at the moment and that's never desirable.

A great way to spend the day. Looks like fun too.

That does sound interesting. I bet it can become quite tedious

hello sharkbytes its dennis the vizsla dog hay wow arkeolodjee!!! just like my old job at the yooniversity!!! i tayk it that the meerkats or the nazis or the ark of the kovenant showd up after yoo wer finishd for the day!!! ok bye