Took an evening road walk. Anyone who drives has a good idea of the number of bugs that meet their maker on windshields and bumpers. However, it's sad when those are beautiful dragonflies.

The first one I found was still alive (probably too injured to recover) but every time I tried to pick it up it curled so I laid it back on the ground to take the picture. That certainly demonstrates how camouflaged it is, despite the bright blue and green colors. I'm pretty sure this one is a common green darner. Those big ones that look like helicopters as they hover over ponds. 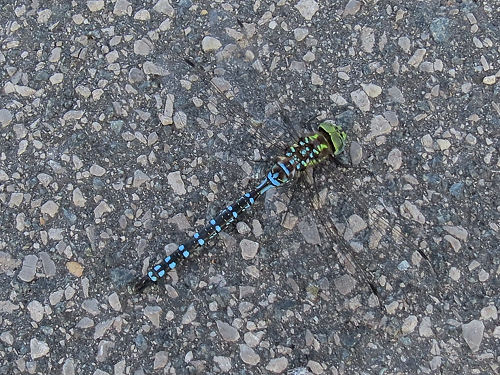 Less than a mile later I found a different one. This one was dead, so I can provide a slightly better background for viewing. I think this might be a shadow darner. I have a basic identification book, but I don't know enough yet to really look for details other than the basic pattern. I should have taken pictures of the abdomen, eyes, etc. But this one was only a little smaller than the first one. 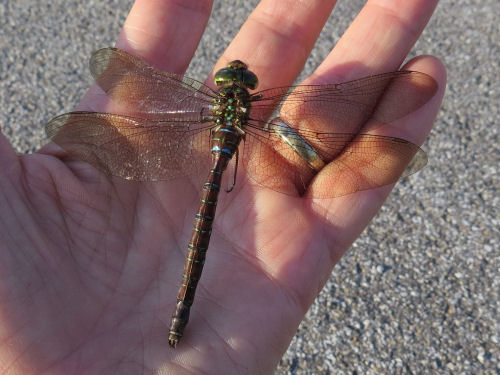 They are such amazing and lovely insects. They don't bite or sting (unless of course, you are a smaller insect they can eat!), so even a live one won't hurt you.

That first one does blend right in to the pavement, especially the wings. They have the most fascinating wings. I occasionally find them floating in my pool.

That is so weird that you and I both posted a picture of a dead critter on the same day, and so similar, too.

They are so pretty--why were we so scared of them as kids??

Hobbes was out in the yard the other night and there were 3 buzzing his head. He didn't even care. It was funny to watch.

I love to watch them.