I went to another play tonight. I had not previously heard of this one. It's called The Cemetery Club, by Ivan Menchell. It was adapted to the screen in 1993, but I didn't see the movie either. Not particularly my kind of show... all about relationships and feelings with no real action or strong story line. That said, it was good for that sort of thing.

The idea is that there are three Jewish New York widows who have been longtime friends. More than half the play takes place in Ida's apartment. Ida (left) is the most recently widowed, and is also the most average of the women. Lucille (middle) is flamboyant, and now that she doesn't have to put up with her philandering husband any more she's going to live it up. Doris (right) is just the opposite. Her husband has been gone for four years, but she can't let go. 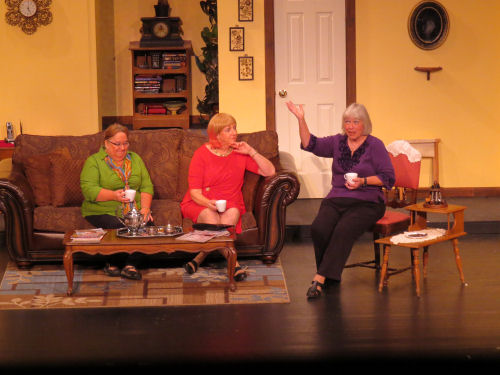 The rest of the play is in the cemetery. Once a month they all go to the cemetery to visit their dead husbands' graves. They each talk to their spouses, and also to each other. Personally, I wished they would have brought a curtain down between the apartment set and the gravestones for the cemetery scenes, just because the set was distracting. But that wasn't a major problem. 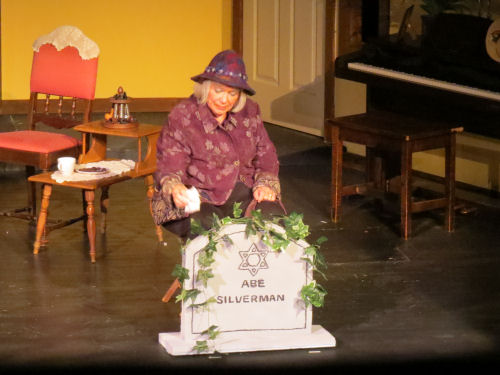 Sam the butcher (who also lost his wife) and Ida tentatively begin a relationship, but Lucille and Doris tell Sam to back off. Although their reasons are different, neither one wants their "cemetery club" to be broken up. Meanwhile, the friends have been invited to be bridesmaids at the umpteenth wedding of their friend Selma. Ida doesn't understand why Sam has stopped calling her and is unhappy when Sam arrives to give them a ride with the very forward Mildred hanging on his arm.

They arrive back at the apartment after Selma's wedding, drunk. Of course, Ida then learns that her friends are the reason Sam hasn't been coming around. 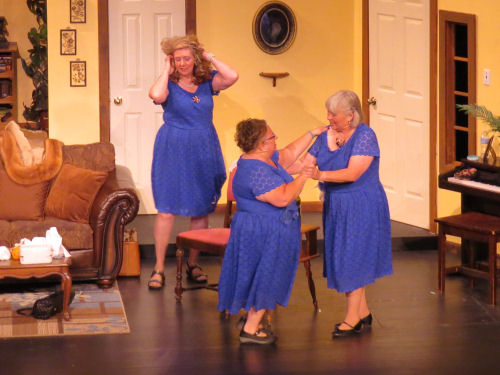 I'll stop my narrative here, because it's almost to the crisis point of the play, and I don't want to give it away. But things end at the cemetery, with Ida and Sam moving on with their lives. 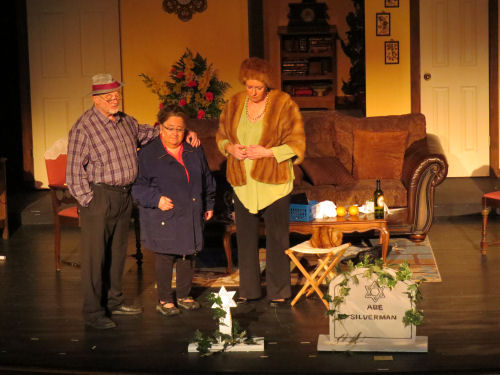 There is a lot of "Jewish mother" type humor throughout the play which keeps it from becoming maudlin. However, the timing of this production was slow. Just because the underlying material is serious doesn't mean it has to drag. It made it look as if the actors forgot their lines (unless, of course, they did forget their lines... haha).

Then again, you could say I'm never satisfied since the current audio book I'm listening to in the car is being read at a fast pace by a woman with a squeaky voice that makes me feel like I'm listening to Alvin the Chipmunk.

Interesting play. Just from looking at the pictures I have to agree with you that not having a divider between living room and cemetery sets is distracting.

This brings back good memories. I played Ida years ago in a lively production that highlighted the cemetery scenes in spotlight on the apron. My all time favorite role!

hello sharkbytes its dennis the vizsla dog hay hmm i do not think i wood want to liv in an apartment wot peryoddikly sprowted toomstones!!! i think they shud moov!!! ok bye