Last night as I was leaving the play the moon was simply amazing. I don't think I've ever seen it look as large. I was driving down the street and wondered what the huge yellow ball was between two buildings. It was as tall as they were. Then I realized it was the moon!

I couldn't stop right there, but pulled off into the first parking lot, and then had to find a vantage point from which I could take pictures. Meanwhile, the moon had risen above the level of the buildings, but it was still quite large looking.

I think this may be the best moon picture I've ever taken. One day past full, one past being "blue." Still, I'm pleased. 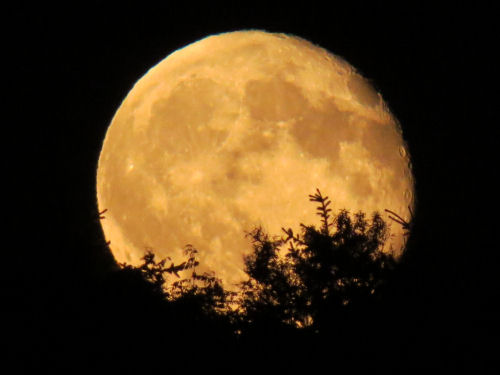 awesome shot of the moon. There have been mornings when I head out to work that the moon has looked extra large and almost like you could reach up and touch it. Of course at that time of the morning I don't have time to stop and take pictures

Nice work on this one!

I took some shots through a telescope, but nothing that's better than your photo for today.