Went to a play at the Howmet Theater in Whitehall tonight. The play was the thriller: Deathtrap by Ira Levin (think Boys of Brazil and Rosemary's Baby).

Who would have guessed that a thriller could also be hilarious? In the scene below an aging playwright kills a young man who has stolen an idea he had and turned it into a play that is so good it's certain to be a success. When he learns that the only two copies of the play are there in the room he decides to get rid of the writer and use the play as his own.

The writer's wife looks on in horror. 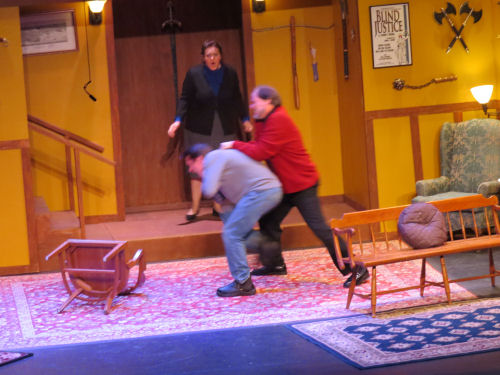 But wait! Things are not as they seem and, anyway, you probably shouldn't commit a murder when there is a famous Dutch psychic living next door for the summer. (Even if you do have weapons of every description on your study walls.) 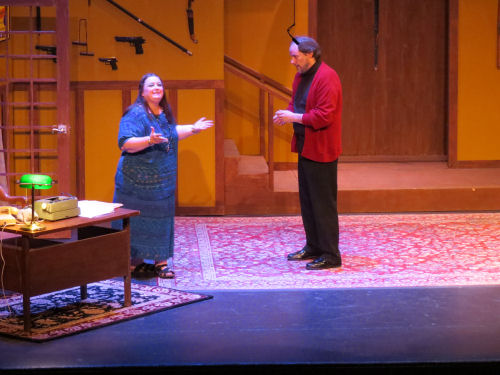 I don't want to give the story away because it's really very funny, and not so familiar that everyone already knows the outcome.

Since the characters are playwrights they keep discussing writing a play, which is the play you are also watching. This makes things even more zany, and it's always good when an industry can poke some fun at itself.

Whenever you post about going to a play like this or something similar I kind of wish there were things like that near me. Now I don't have that excuse of nothing near because there are plays sometimes right in the next town. I need to go and see one now.

sounds like a good one. I should look and see if there's anywhere near me that I can go see a play

Wasn't there a movie like that years ago? With Christopher Reeve?? Why does this sound familiar??

Either way...glad you had a nice night out.