Here's a cute little guy that showed up on my porch. Keep in mind the picture is much larger than the real insect is. The leafhopper was probably 3/8 inch long total. Actually larger than a lot of them I see. But I'd never seen a white one. I mostly see green or brownish ones. 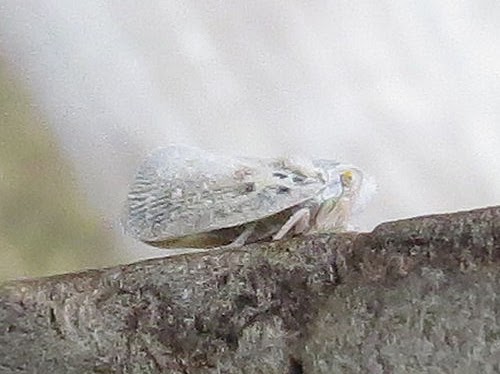 Leafhoppers are true bugs, Hemiptera, in the family Cicadellidae. They used to have their own order Homoptera, but that order has been split up and placed within others. Some species can be real pests of food crops when present in large numbers. They have piercing-sucking mouthparts and will suck the sap from leaves.

They jump so fast you could almost believe they can disappear. You'll be looking at one, and then it will be gone without seeing it go!

I found information about two white ones, but both of those have translucent wings, which this does not. One lives out west and is called the White Apple Leafhopper. It does a lot of damage. One that is found in the east is the Grape Leafhopper, but it too has translucent wings. There are over 20,000 species of leafhoppers that have been described... let alone ones that might not have been named yet.

I will just continue to think it's cute until forced to consider it as bad.

I'd say it is a cute bug until it starts eating up everything around it.

Yep so long as it's just a leafhopper and not a sap sucker it's kinda cute :)

No duress here xo decide for yourself. They are quick!

Well done for capturing this on the camera.