My Trailer - Redo Day 20 - Fiberglass and the Big Hole


Today I decided to take on the Big Hole. In the end, I didn't do it the "correct" way, but I'll tell you why. And, it's not done, but the filling has begun. First of all, let me remind you that this is Saturday, and I always give myself a free pass after working all night Friday night. I don't do anything I don't want to do. I probably had time to do more than I did, but at least I did something.

So, this is the hole that was left behind the air conditioner unit after I finally got that whole thing out. It's covered with plastic in this picture which is why you can't see grass and trees, but it measures 11" x 20". Big.

The store finally restocked the fiberglass mat, so I now had all the things I needed again. Actually, it turned out that I could have gotten as far as I did today with the first package, but I didn't want to start until I had everything, in case I decided to keep going. 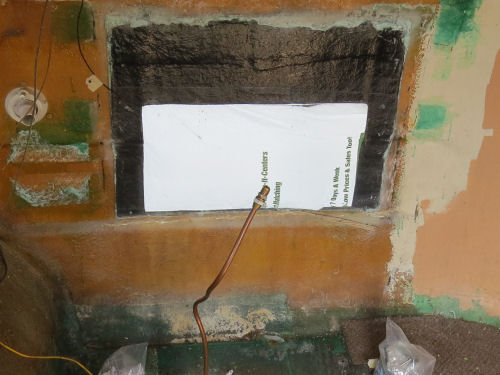 The proper way to do this is to get a cast of the outer surface with one layer and then remove that and build it up until you have a piece about the right thickness, and then fiberglass it into place. I was going to do that until I realized the hole went across the "bump" ridge of the stripes. I actually taped a backing piece into place to do this, but realized I'd never get that angle really right for the outside. So I decided to try it the same way I did the small holes.

I made a cardboard cutout to fit in the hole, bending it to match the ridge, put it on another backing cardboard, and covered it with wax paper. (See link below to Fiberglass 102 for more detail on doing this.) But I wasn't happy with the amount of give in this large piece. So I used the rod from a towel bar and wedged it tight into the angle. 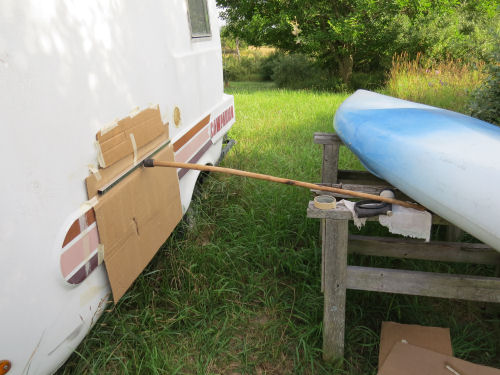 It was tricky working the resin into this large of a piece of fiberglass with angles, vertically. And the inside was very rough and irregular from cutting out that housing that had been fiberglassed to the wall. But none of that will show later. It wasn't looks I was worried about, it was air bubbles, and I did get some that I couldn't do anything about. Some I can fill when I start work from the outside, some not so much. Well, whatever I end up with has to be stronger than that big hole, right?

So here's the initial mat with the resin worked in to hold it to the inside wall. Looks opaque because the cardboard is still on the exterior. 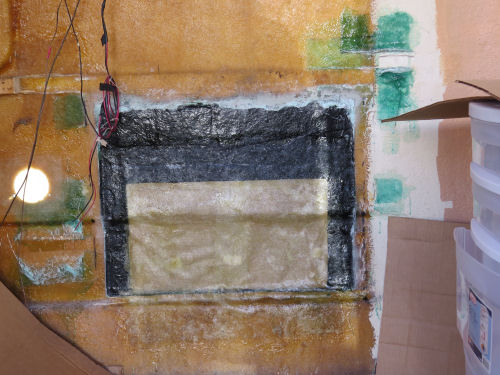 You can see that the ridge definition is there toward the edges but gets lost a little near the middle. After it hardened, and I took the cardboard backing and wax paper off, well... same thing. Edges aren't bad, but the middle is sloppy. As I suspected, I couldn't really mold that shape vertically. Hope I can improve that as I build up the layers. 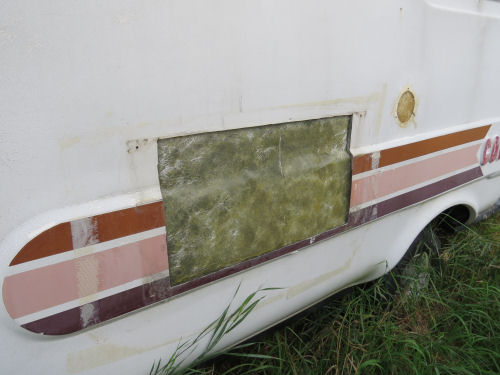 But this initial layer is nice and hard, and ready to add more layers. You aren't supposed to do more than three at a time, but they only have to dry a couple of hours between times.

I also sanded out divots around the screw holes that held all these vents and things on. They need just a small bit of fiberglass mat added. 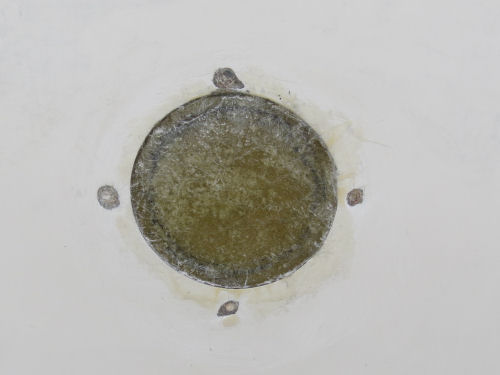 And there is one more small hole. If I'd remembered to get it ready I could have done it today, but I keep forgetting because it's up high (out of my line of sight). The screws holding the covering are all rusted and I had no patience left when I started to take them out. Another day.

I also started to strip one more tiny area, but the paint is really tight, and it will need a second coat of stripper. I also think the stripper softens up the blades of the plastic scrapers. I broke one, and have softened two. I did buy a few extra because they are cheap, but it's just annoying. Again, patience gone. It's Saturday. I'm calling it a day.

Posted by Sharkbytes at 7:49 PM

That looks like a really good start on repairing your "big hole"!

You got a lot done on that. I can imagine it would be difficult to get ridge just right

Stew- at least it's not going to get wet inside the trailer now.

Ann- I think the first piece will be the hardest, except for the final filling and smoothing to match!