My Trailer- Redo Day 11- Playing in the Water


You know how I feel about getting up early, but at least the sunrise was pretty, even if I had to go to work. 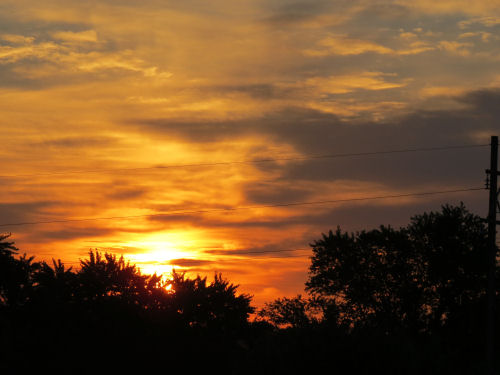 Work was longer than we expected, and I wasn't sure I'd get anything else done today. (Because you know I go back in tonight.) But it was hot. If you ask any little kid what's the best thing to do on a hot afternoon, I'll bet a lot of the answers will be some variation on playing in the water.

Since that was exactly the job I could be doing, I got myself moving and scrubbed the entire roof of the trailer. 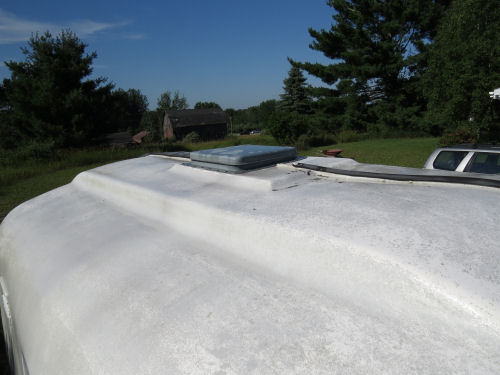 Whatever was plugging the hose either dissolved or worked its way through because I had full water pressure today. That helped!

Here's the view from the opposite corner. 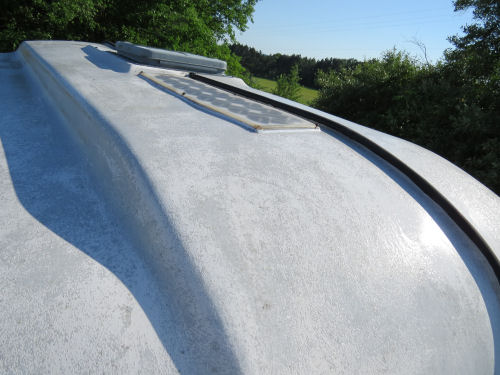 I only did two scrubs and hose downs instead of the three on my test spot yesterday. Since I've decided that the flaking paint has to be stripped, it's probably not as critical to get every particle of mold off. You can see how much of the paint, at least on the roof, has come off just with the cleaning.

This has taken most of one can of Bar Keepers Friend. A pretty impressive amount of progress for $1.99. 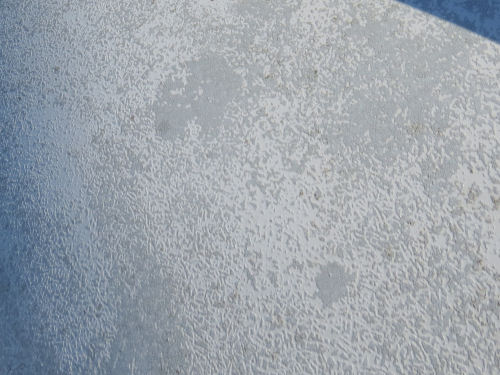 While I was up there, I made two discoveries. This seems to be some sort of solar panel. Not attached to anything, but it may explain the two wires hanging out of the ceiling that don't go anywhere. I may take it off, or I may not bother. We'll see. 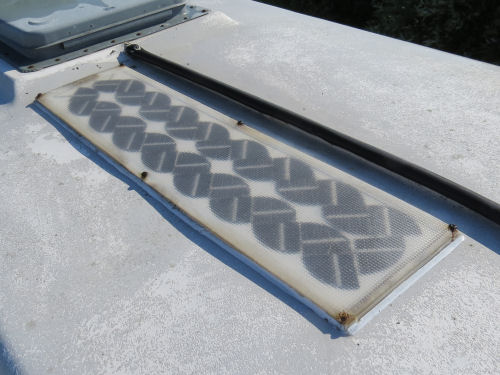 The other discovery isn't so good. The rubber seam cover is starting to split, so that will have to be replaced soon. Probably a good idea, but I hadn't really thought about it.

Every single thing I take apart leads to some other issue that needs to be addressed. But I've spent a lot of my life just putting bandaids on the immediate problems because I couldn't afford a real fix. I want to do the trailer right. I'm having fun, and I enjoy doing this, but I'd like to not take things apart every couple of years because I only did the underlying jobs partly right.

One piece of good news is that nothing seems to be leaking. Even with hose pressure, when I checked around the vent and window tops inside (since it's just the bare fiberglass with some wood framing pieces no water can really hide), there were no damp spots inside.

This leads me to my next decision dilemma. The windows were put in with silicone sealer. Not good. You should used butyl on fiberglass. But... they aren't leaking. I hate to pull them all out when there doesn't seem to be a problem. Of course, it would be better to take them out to paint, but really... if I do that, Except for the floor, it really will be down to just the fiberglass shell. I think the floor is good, I don't feel any soft spots, but I haven't pulled up the carpet yet.

Glad you're enjoying all the work! I agree, do it right from the beginning, but don't overdo it unnecessarily.

You are making great progress.

The barkeepers friend did a good job. Nice to discover that there are no leaks