My goal for the day was to hike the rest of the trails at Arcadia Dunes. That was three more loops for a total of about 8.5 miles.

As I was driving back to the area from my campsite, I realized that the ridge ahead of me is the glacial moraine on which the Dry Hill and Camp Arcadia loops are perched. You can see what a long ridge of a hill it is.

First I went back to the same trailhead as yesterday on St. Pierre Road. But this time I took the Camp Arcadia Loop to the southwest. This is a much flatter loop, about 3.5 miles. Still almost all wooded and makes a nice easy hike for those who aren't interested in ten hilly miles on the trail I did yesterday. It gets its name from the volunteers who helped build it from the Lutheran Camp Arcadia. 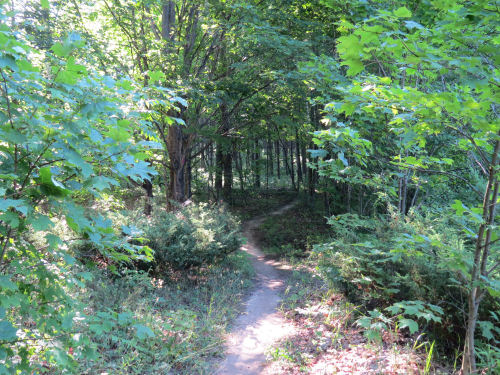 The wildflower that was blooming everywhere was wild onion. Here's my best shot. 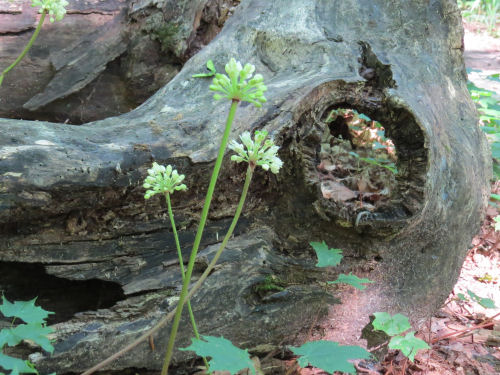 Finished that trail by 10:30. Had a snack and drove the few miles to the Old Baldy trailhead. Keep in mind that just about every large open dune on the west coast of Michigan is named Old Baldy. This is the one at Arcadia Dunes in the C.S. Mott Nature Preserve.

This trail has two nested loops, and by doing a zig-zag pattern I hiked all but 0.1 mile in this system. I expected this to be a lot of open meadow, sand in the sun, and generally hot and not as nice except for the lake. Wrong. It's almost all forested except for the final approach to the dune.

The preserve is trying to keep people restricted to certain paths to protect the dune. 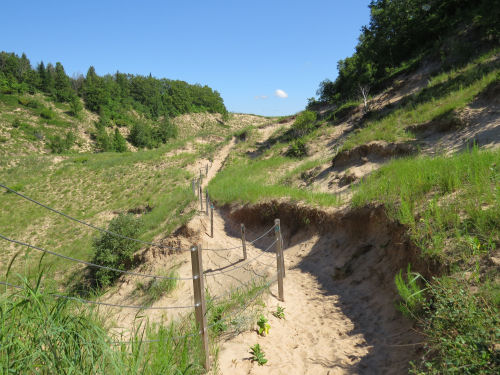 The view at the end is pure Michigan. I took a lot of pictures, but chose this one to show you. It really should have a series, because you can't tell from this picture that there is a very steep 380-foot drop to the surface of the lake. Climbing down and up is not recommended. I took one picture of a small boat and people down on the beach. They look like toys. 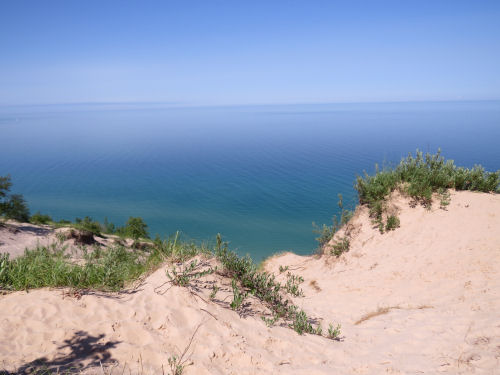 And, I got to fulfill one of my lifetime plant quests. I saw the federally endangered Pitcher's Thistle in bloom. It only grows on the shores of the Great Lakes. 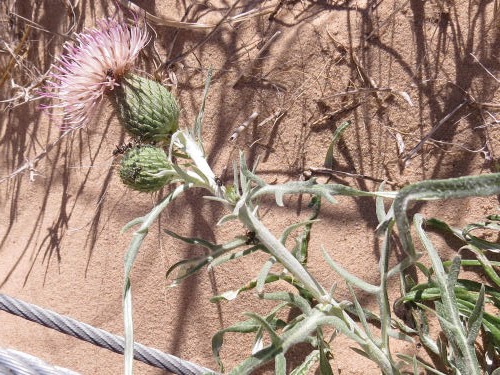 The biggest downside of this trail was that it had quite a lot of poison ivy. But I washed my legs when I got back to the car. About 4 miles for this trail. I should mention that one section is a nice accessible trail out to an overlook at the lake that was in good condition, and not all in blazing sun like many accessible trails are. Bicycling is not recommended on the Old Baldy loop because the soil is sandy and fragile.

Next part of the quest was to find Pete's Woods Trail, which was on the east side of the preserve. I had my doubts because I know the road the trailhead was supposed to be on. Seasonal, and definitely on the low end of that spectrum. Well, the trail was a nice 1.5 miles up and around the top of a hill and then back down. Interesting changes in topography without being too strenuous, and the spring wildflowers are supposed to be excellent. It was definitely different from the others.

But the biggest challenge was indeed the road. Puddles clear across the road (not my favorite because you can't tell how deep they are) and 8-inch deep loose sand ruts. My Subaru had no issues, but I think not every car would like that trip.

It wasn't a place where pictures can really show the trail features. This shot maybe captures some of the rolling topography. Pete was the farmer who owned this land until the 1970s. 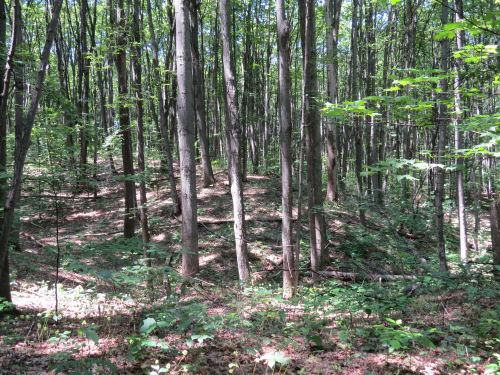 So, my "official" quest was done. But I knew there was a tiny nature loop I'd never seen that was only a couple of miles out of my way. Since this is still more than an hour from home, I decided I was up for just a little bit more walking so I could see it.

This loop is called Misty Acres, in the Borwell Nature Preserve (incidentally also managed by the Grand Traverse Nature Conservancy- the same as all the Arcadia Dunes trails). The loop is indeed tiny, under a mile, but it was a very nice walk. This is a fairly new preserve, and they are still inventorying the plants and features. There may be more public access in the future.

My pictures are crappy with too much dappled sun, but half of the loop is along a steep ravine with a creek at the bottom that flows into the Betsie River. At the north end of the loop you can get glimpses of the river through the trees.

Best picture there is some bright little mushrooms. Total miles for the day, about 9.5. 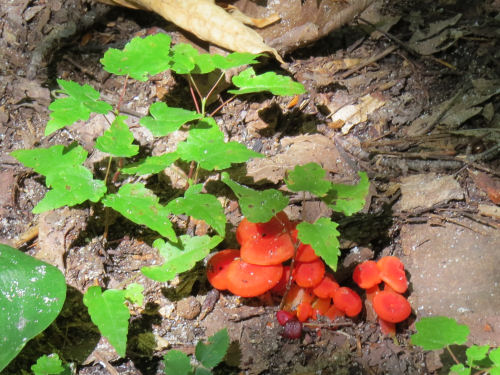 Home, car unloaded, clean, ate a big salad. A great weekend, but I think I'm going to bed early to try to rest up a bit to face work tomorrow!

Sounds like a lot of good hiking. I've only seen that Pitcher's Thistle once or twice, up on Manitoulin Island.

Joan. I've spent tons of time around Sleeping Bear Dunes. Can't wait to do these hikes. I live downstate. If I drive up that way recommendations on a place to stay (not camping yet- a room somewhere) ? How many days did it take you total to do all the hikes? Sounds perfect for me right now.

NewDayHiker- there are about 18 miles total on the trails. the long one is 10, the others are shorter. There are motels and resorts along M-22 and US 31 from Arcadia to Frankfort. Don't know enough to recommend anything specific. Traverse City is the closest big town.

Congrats on your quest! Have a good time.