COM... ing with me? The letters aren't as hard to strip as I thought they would be. The stripes are much harder than I thought. 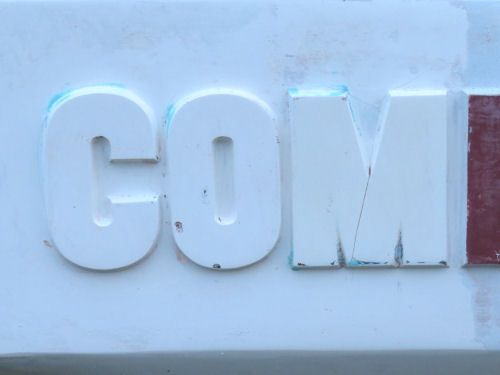 Stripping the paint on my COM... panion is going to take pretty much as long as I thought. I just hope I'll be able to get it painted this summer. I sure wanted to get a lot more done than that. Again, I've outlined the completed parts in yellow. The part just above the wheel isn't done well enough, but I got rained out tonight. If you are reading this in search of info about trailer refurbishing, at this point, I've not quite used a quart of Citristrip. 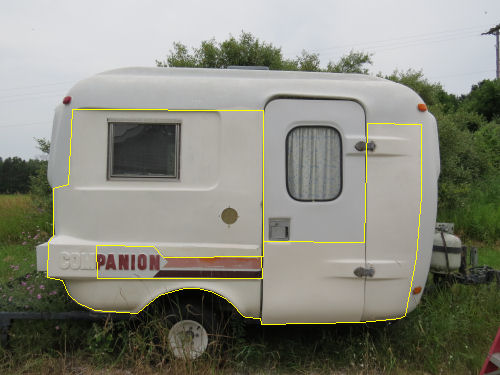 Did you catch that: COM... pleted? Being able to really say that is drifting off into the future.

I had hoped the paint would come off like it is on the door. Here's a mystery. Same trailer, same container of stripper (yes, shaken before each use), same thickness of application. But on the door, the stripper bubbles up, and when I scrape the old paint just wipes right off. Now that would have been nice for all of it! 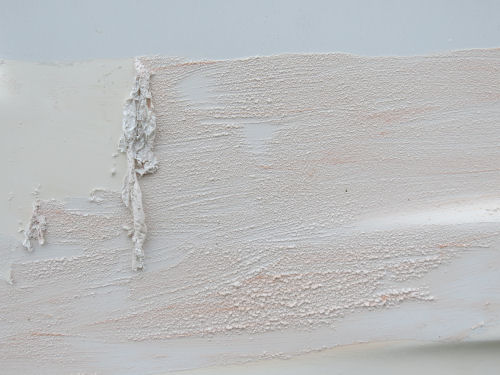 The COM... plicated part is the stripes. They are some sort of tape. And I guess this answers the question about whether they were original. Not. The paint is under them. They are hard to get off. First I tried sanding. It worked, but was slow and was pitting the gel coat because I had to press so hard. Next I tried acetone. That gummed up the adhesive and it did work, but I had to use a lot. That's when I realized there was paint under the tape. So I slathered on an extra helping of stripper, let it sit, and the tape peeled off easily- mostly dissolved. Then I had to strip the paint under it. 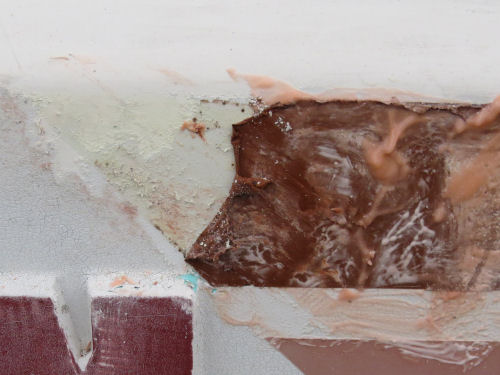 I'll do the final stripping close to window edges and hinges, etc when I take those pieces off. Since I am working outside, I don't want to take all those out/off until I'm ready to deal with the openings. I may have to buy a big tarp.

COM... fortable? Not yet. The inside is still a mess of wood pieces, cardboard, tools and stuff. But the vinyl for the floor is ordered, and I've chosen the fabric for the shelving curtains. Had to spend a lot on swatches to get the right one, but I guess it was worth it. Certainly better than driving hours and visiting multiple fabric stores only to learn they don't have enough yardage left, right? I'll be ordering that this weekend. The one I chose has the yellow arrow. 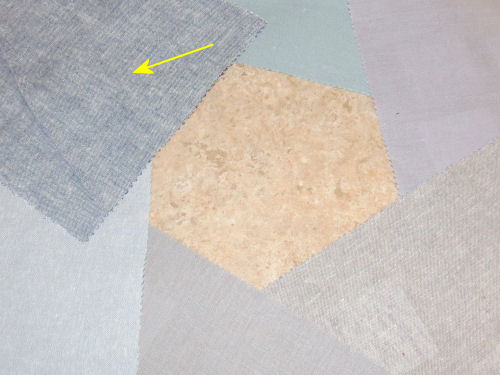 And, I'm contemplating a fix for the sprung door bottom. Don't have it all figured out yet, but I have an idea that might not be a COM... pletely horrible job. Also, one that I have tools for. I've seen one (and only one) fix for this problem, but it requires a metal shop and skills I don't have.

Oh! And I have the fix for the "strike plate" (It isn't really that, but I'm not sure what to call it on this type of latch) figured out, and it's COM... paratively easy! I might have to find a friend with a larger vise than I have to bend some metal, but this is within my metalworking skills.

When I do finally get this on the road, I hope some of you are looking for some passive/aggressive COM... raderie, because I just might come mooch an electric outlet off you for a visit. I say passive/agressive, because I'm more of a hermit, you know!

Posted by Sharkbytes at 8:57 PM

It's looking really good. I like the fabric you chose. It makes me think of faded denim

Looking forward to the COM...plete story!

Looking great on the progress. Welcome mat and latch string are always out for you.

Ann- yup! The cushions are going to be blue jean patchwork

Stew- me too. I like doing it- I'm totally a process person- but I hope my desire to use the trailer will keep me going to COM... pletion.

Chuck- You'll see me for sure. I have a 100 foot extension cord!