I actually spent a lot of time on the trailer on Saturday, but wanted to blog about going to the play that day.

All of the trailer except the left side is now washed and scrubbed with Bar Keepers Friend. Looks pretty clean! Every piece that could be completed is being held up by the fact that I still can't get the fiberglass mat. I don't want to hose down that remaining dirty side with the big hole in it. The vent cover that screws over the hole isn't sealed any more, so it wouldn't really keep the water outside. 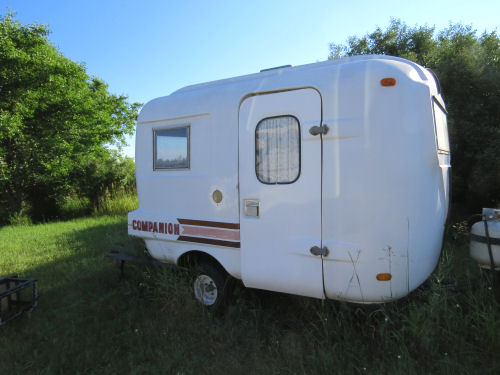 For almost a day, I was thinking I'd just wax it and not paint for a couple of years. But... to paint, the windows really need to come out. Also the lights. The windows don't leak, but they are sealed with silicone not butyl, so leaking is pretty certainly in their future. One of the lights isn't sealed around it at all. The rest are actually sealed with butyl. If I don't take all these things out now, I'll have to do it later when I do paint, after the interior is finished with more chances to do some unintended damage.

So, strip and paint it is!

Today I bought a quart of Citristrip (and some Mineral Spirits). Certainly not enough to do the whole trailer, but I wanted to try it before I buy a gallon or more. This is not going to be cheap. 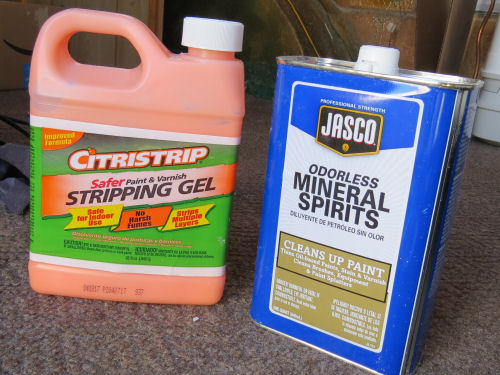 You want to put some of the stripper in a metal pan. I've seen lots of videos of people using Citristrip without gloves, even sticking fingers in it to show how safe it is, but the directions recommend gloves. You also need a cheap brush to put the stripper on with. 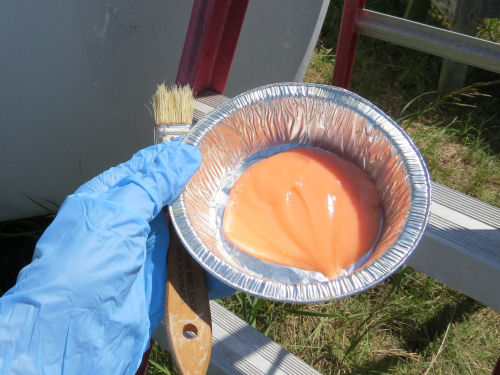 The top of the trailer isn't a visible section, and it's where the old paint has flaked the most, so I decided I'd work up there first. I spread on just the amount you see in the foil pan. I had no idea how thick, so being a bit stingy, I went for rather thin. 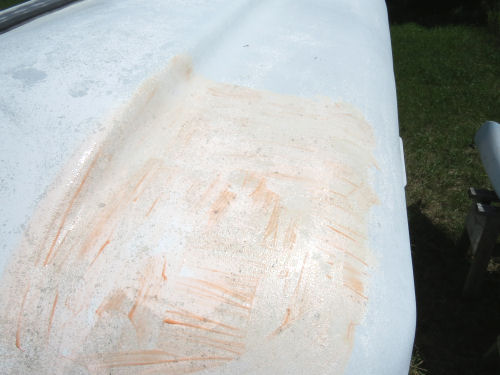 I let it sit 40 minutes. 30 is the minimum. Of all the things I've read, only one person said they thought it damaged the gel-coat. I can't believe all the people using Citristrip on really expensive boats would continue to use it if this were an actual problem. My speculation is that someone left it on for the 24-hour maximum or more. I suppose that might penetrate an old gel-coat surface.

The sun was hot this afternoon, and the stripper was dried out when I returned. Even so, it scraped off pretty well. I did end up using a bit of elbow grease behind the scraper. I applied a second thin coat, and extended the area. 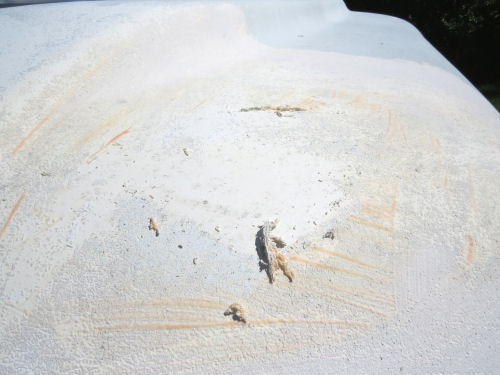 The second thin coat got all the rest of the original area free of paint, and thinned the new section. Then I wiped the area down with mineral spirits. 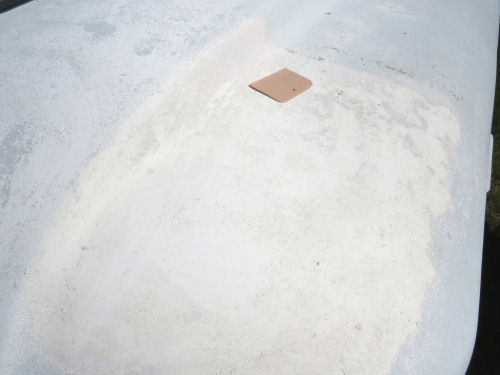 Just to try a bit where the paint wasn't so cracked and flaked, and also wasn't in the hot sun, I tried a section to the right of and above the area I sanded around the (now partially fiberglassed in) furnace vent hole.

Where the paint is more intact I should definitely use a thicker coat of the Citristrip. Whether it was in sun or not didn't seem to make any difference except in my comfort level.

You can see that all the paint only came off in a few places. It's the bright white that matches the sanded circular area. 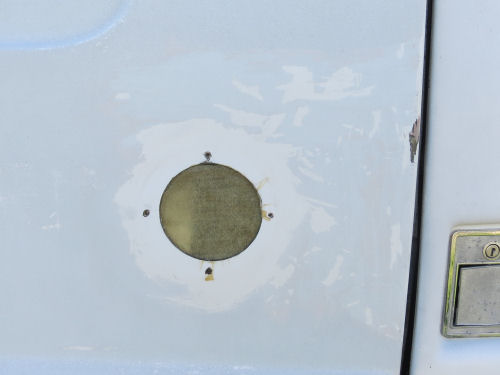 Well, this is going to be a huge job. I'll have to just keep working on it. I won't bore you with every day I get another spot cleared.

I went to buy the vinyl flooring I had chosen, and discovered the store had yet another sample that looked pretty good. So, instead of purchasing, I brought the third piece home to play with. Still haven't decided about that. The really good thing is that the owners were there. They are friends I haven't seen for quite a while. Hugs and visits are nice.

I am now seriously contemplating a small solar panel/inverter system so I can be more independent of an electric plug-in. Definitely not decided about this yet. I wanted to avoid dealing with a battery bank (no 12 V hookup). A small system with only 2 batteries would probably meet my needs, but even this modest plan would be pretty expensive. But if I want to do it, now is the time.

That stripper did a good job on the roof. That does look like a lot of work and elbow grease though.

Each day the dream moves closer to reality.