Today, I'm backing up to tell you about the wetlands I encountered on my hike Wednesday. They are something special, and I didn't even realize it before. And this is despite the fact that there is a 4x8-foot interpretive sign that's been there a long time. Now I'll justify my ignorance. I have hiked this particular piece of trail at least twice before Wednesday. Both of those times I was walking from south to north. The sign is positioned so that it's almost invisible when walking in that direction. Going north to south (and I walked both directions on Wednesday), it's easy to see.

Here's the deal. You may only see a damp, shallow pool with a bunch of grass-like stuff. What you are really seeing is a place that is so unique there are only 42 of them in Michigan. I don't know if all of the wetland ponds along the trail in this section are counted in the 42, or if the area counts as one. I'd need to go back, probably with multiple days of exploring to differentiate the ponds. But it's so interesting, I may contact the Forest Service biologist about a "tour" or a day of volunteering for plant inventory. I'm sure they don't want amateurs stomping around in the most unique without a good reason. 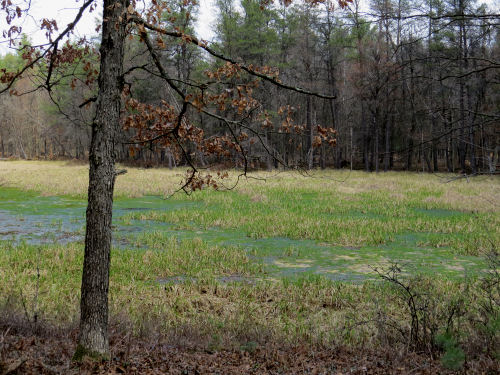 Still looks like a shallow pond, right? These 42 wetlands are characterized by acidic conditions in shallow depressions in sandy soils associated with glacial outwash channels or post-glacial lakes. They have very gently sloping edges which are alternately exposed and covered with water. The thing that makes them SO unique is the plant communities they support. Are you ready for this? 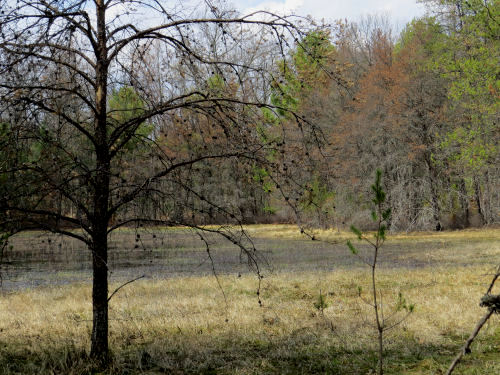 The plants they support shouldn't be here in the Great Lakes. The plants are more properly found along the Atlantic and Gulf Coasts. They aren't strung out from the coasts to here. They are just missing in between. This is called a disjunct. 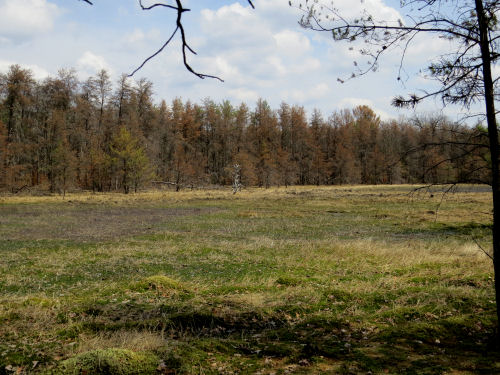 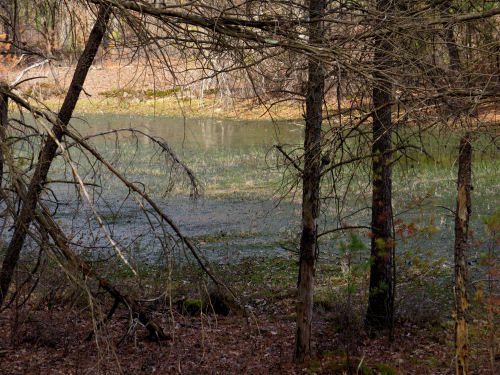 I did some more research when I got home. Some of the plants are so rare, I've never even heard of them. Now I definitely want to get involved in a plant field trip! The MSU Natural Features Inventory lists over 100 plants typical of a Great Lakes Coastal Plain Marsh, and about 45 of them are rare to endangered. There are also some rare animals associated with them.

The interpretive sign shows a picture of the orange fringed orchid- one of the plants I'd never heard of. However... most of thes 42 wetlands are in southwest Michigan. The U of M plant database doesn't show this orchid as being found in Newaygo County, which is where I was. Newaygo county is shown as having a high incidence of this type of wetland. It would be SO cool to find the first one in that county! (As you may remember, I was the first one to find a particular plant in my home county. See Oxtongue, so it's not out of the question).

I borrowed this picture of the orange fringed orchid from the U of M Herbarium web page. Talk about a spectacular plant! 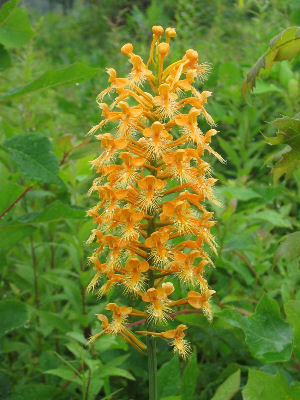 Another plant typical of these wetlands is lance-leaved violet. I have seen this plant. In fact, took this picture along the NCT, somewhere near home, in 2009. Sadly, the SD card the original photos were on has gone bad, and I did not note exactly where that hike was. Eye roll. I'll just have to find it again. 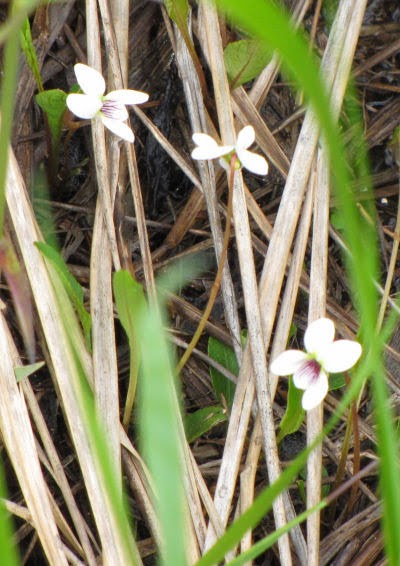 A lot of the plants on the list are ones of little interest to most people- various rushes and sedges- brown and green spikey things. But I want to see them!!!!

In other news: I hunkered down and did a lot of editing today, and some errands. Probably ditto tomorrow.

Wow! So neat tofind a new rare habitat with all those new species. I've heard of Atlantic 'disjuncts' here in Ontario.

Ann- I seriously want to get back there

Stew- There is one particular one in the UP that is known for rare plants, and I've gotten some neat pictures there (back in 35mm days), but I had no idea that most of them are in SW Michigan.