As I was driving home yesterday, I got to feed another of my hobbies- that of being a railfan. It's something of a mystery that I'd never noticed this bridge before. Granted, I don't drive this route terribly often, but this is certainly not the first time I've done so.

The White River passes just south of White Cloud. Yes, this is the same White River that I have hiked to twice in the past few months. Here's the view downstream. The water is moving at a pretty good clip. This picture is taken from the road bridge. 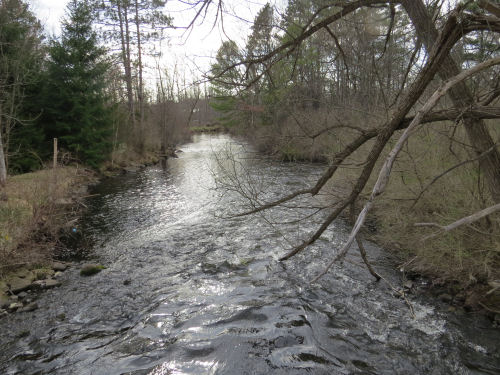 But what caught my eye was the view upstream. 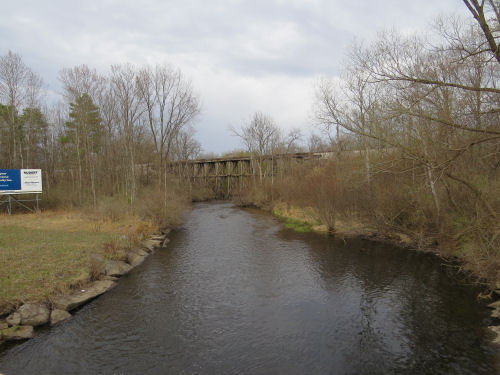 Wait! What? I had to stop and walk back to take pictures!

This is a wood trestle railroad bridge. This is part of the same line that runs past my house, Marquette Rail. Near me, it runs east-west. But at Baldwin, it turns south and goes to Grand Rapids. This is on that track. What I'm telling you is that this is an active rail line. 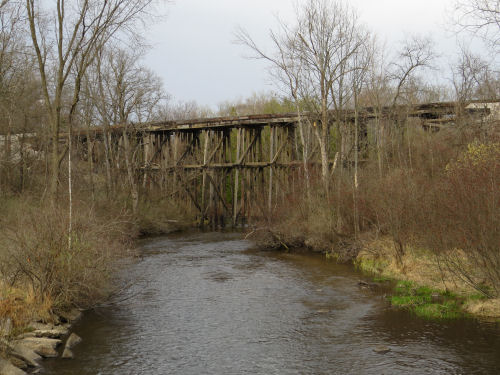 So far, I haven't been able to find out anything specific about this bridge on line. It's a typical type of construction for the 1800's. The line was formerly the Pere Marquette- probably Michigan's most famous railroad. However, they formed in 1899 by buying up several other lines. One of those was the White River Railroad, which ran from White Cloud north to Bitely. However, the White Cloud station was north of the river. It was at the junction of this line and the Chicago and West Michigan which connected with Muskegon that the PM also bought.

So, my best guess is that the Pere Marquette Railway built this bridge when they extended the line south to Grand Rapids. However, that doesn't seem consistent with the fact that bridges of this contruction type were usually made earlier.

The uprights were pile driven into the river bed. The outer ones angled to provide stability- the same principle as a flying buttress. This type of bridge construction is uniquely American. Of course, the really huge ones were out West.

I'm fairly amazed to find even a small one still in use. 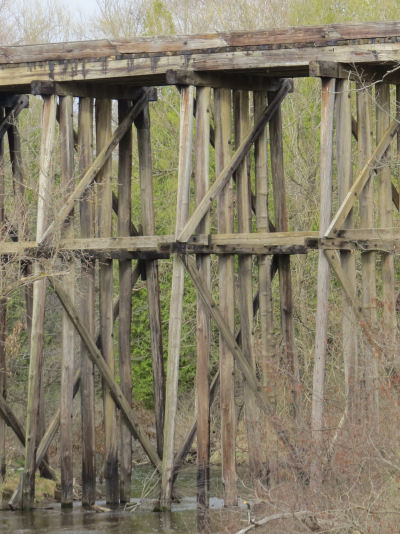 In other news, believe it or not, I wasn't incapacitated from yesterday's hike. I painted for six hours, and finished that job. I'll admit I was getting tired, but hadn't checked the time because I wanted to finish. When I did see how long I'd been working, I knew why I was feeling tired. And, I did a little editing.

So now you have a mystery to solve. Just who built this bridge.

Ann- I do indeed!

Lulu: "Our Dada says that looks like the kind of bridge that somebody in a black hat and a curly mustache would be booby-trapping with dynamite!"