With some amazing help from a local volunteer, Michael, we drove out of town at 6:30, and he delivered me to a remote trailhead at 8 am, on very bad roads. My goal was to hike 12 miles. I was a little concerned about the distance, but not as concerned as I should have been.

Right at the beginning was an interesting waterfall. The picture doesn't show it very well because the water is the same color as the ice. It's flowing down a chute from upper right to lower left. 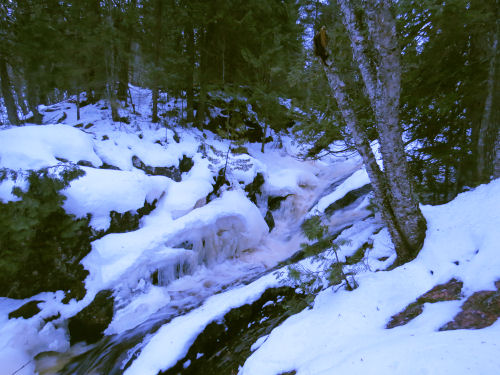 This is a beautiful but rugged section of trail. I loved the places where the snow had melted off, leaving mossy rocks. 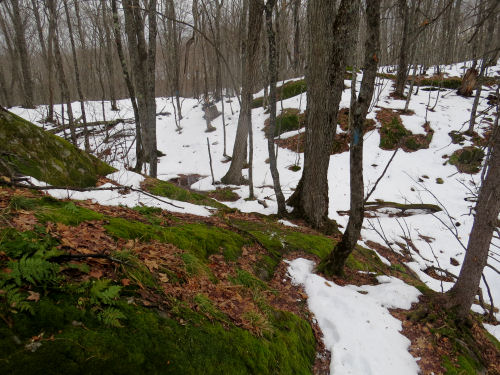 It's always hard to show elevation change in photos. This is the bottom of one valley, and I hope you can see the trail angling up the rocks on the other side. 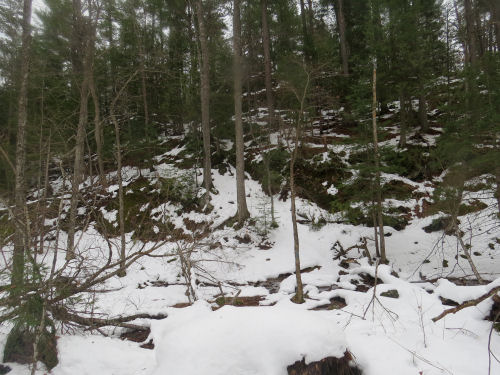 However, the biggest challenge was that all the low spots were flooded, and I had to work my way through these. 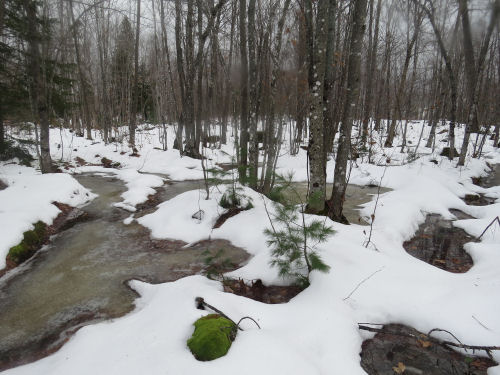 So, anyway, I was making just over one mile an hour. Not good. 12 miles= 12 hours. That was going to have me coming out of the woods at 8 pm. In case you haven't noticed, it gets dark at 5 pm. The only place to bail out was 3 miles in. On the very tippy-top of a rocky hill at mile 2, I had cell service. If I was going to change the plan, I needed to tell someone what I was doing. Sigh. I decided to bail out at Wildcat Canyon. Sue and I communicated, but she was nowhere near me, and was doing some errands of her own.

No problem, really. I had a county map on Avenza. I knew exactly what roads I needed to walk to get back toward civilization. I started down the road, and Sue would come to me when she could. It was a beautiful day, even if I wasn't on the trail. This picture looks artsy-fartsy because my lens was fogged up, but you can see the color of the sky! 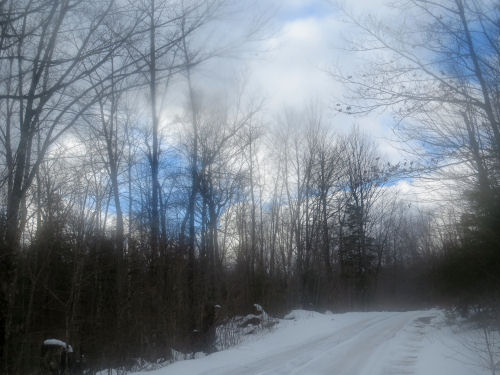 I had walked 2.8 miles and a truck pulled up behind me. The driver said, "What on earth are you doing? I've been following your tracks for a really long way." So I explained, and he told me to hop in and he would take me out to the main road where I would be able to contact Sue again.

We connected with Sue at a road junction, and Michael was also there because I had also sent Lorana a message about where I was. However, somehow I must have touched the screen again when I thought I had the location set, and what I sent her made it look like I was lost, so she had called Michael, thinking they might have to search for me. So I stressed her out for nothing. I'm really sorry about that. Note to self- be double sure you haven't moved to locator cross-hairs when you take a location.

The guy in the truck, Gary, was glad to help. He'd been hunting, and similar to how I do "drive-by botany," he was pointing out fresh moose tracks from his moving truck. He agreed that the tracks I saw yesterday were wolf, just based on the length of stride. He didn't have to drive out of his way at all, and he saved me a LOT of non-trail walking. I told him he was now Trail Angel Gary. 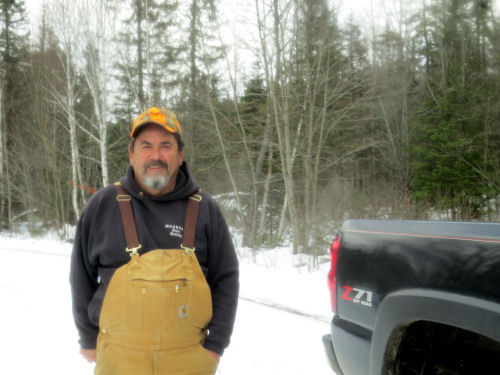 Then Michael suggested a way we could knock 3 miles off the other end of this section, if I still had the energy to hike. I sure did! So we scooted for the east end of the planned hike where he led us down some totally unmarked two-tracks. I was able to hike those miles back to Sue. One of the treats of that section was an area of large hemlock trees. 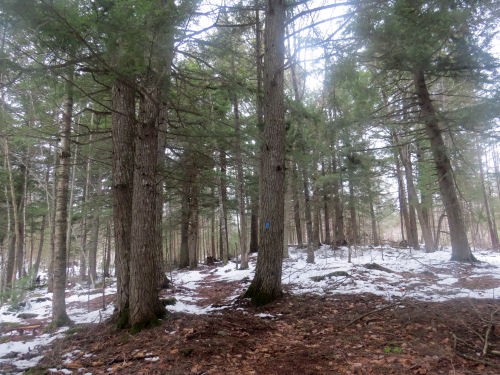 The day did not go as planned, but I managed to hike a reasonable amount of trail. This will make the remaining section do-able in one day, even if I have to go slowly.

If you watch the news you can get a real negative view of the state of the world and people in general - but there are so very many good - very good - people out there, and hikers and hunters are up there in the tippy top of those good people!

Your ability to go with the flow, or roll with the punches, or whatever the metaphor is, is amazing and accounts for your success in your endeavors. Also, echoing what Eric said.

Ann- indeed. I could have walked to the main road, but the ride was much better

David- most people, especially in the backcountry, are really helpful.