After another 90-minute drive in the dark (this one by Sue) to deliver us to a remote starting location, I revisited the waterfall there. Bill and Sue had not yet seen it, so they did get a tiny reward. We arrived a little later than the other day, so the color in the picture is better. It's the same waterfall as two days go. 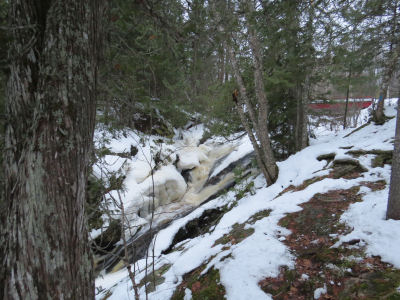 But this time I hiked west. Before long, we entered the McCormick Wilderness and crossed this small creek that had been all muddied up by someone. Very recently, too. The splashed mud was still fresh. 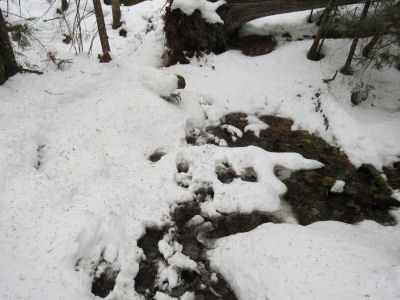 Can you guess who made that mess? A moose. 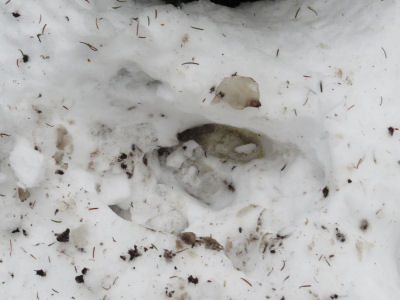 In fact, we saw lots and lots of evidence of moose activity in the easten half of the McCormick. This picture may not look like much, but it's a spot where a moose had slept. There was a nearby pile of poop- the freshest I've ever seen. It wasn't steaming, but it hadn't been there long. 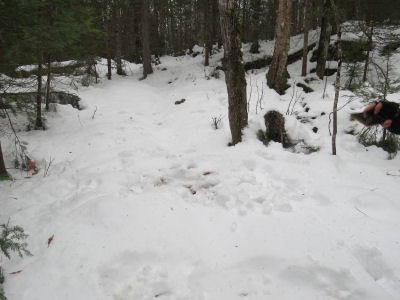 The other thing I didn't remember about the McCormick was how many huge rock formations there are. This is just one of many. 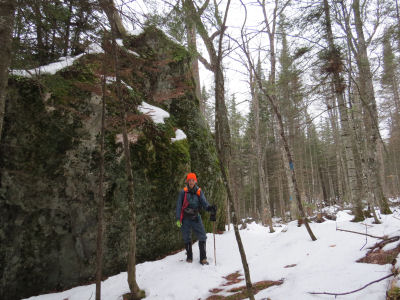 We found another moose bed, and there were tracks all over the place, often using the trail as a relatively easy path through the woods. This is definitely the largest moose track I've ever seen. I wouldn't say it was the size of a dinner plate, but a nice dessert plate size. And you can see the marks from the dewclaws. When these are visible, it usually indicates a big, heavy individual. Probably this was made by a big bull moose. 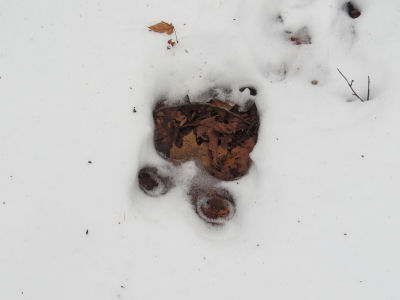 So, what was it like going through the McCormick? The eastern half has not been cleared since that first heavy snowfall they had in October. We had to use Avenza a lot in there because of the number of trees that were down. We'd find a piece of treadway, but then it would disapear under a pile of trees, and we couldn't find it on the other side. Remember, no blazes are allowed in the wilderness. There were a lot of rocky hills and flooded places in the valleys. We just spent a lot of time working our way around all these obstacles and trying to stay aligned with the trail line on the Avenza app. It was easy to tell when we were in the treadway. The section gets enough use that there was a slight depression, and the trail opening was clear of small shrubs.

The western half has been cleared since the storm. It was easy to follow the treadway, I think we checked Avenza maybe twice in those 3 miles. There were also fewer steep hills in that half.

One fun feature that I wasn't aware of before is that the trail goes right by the high point of Marquette County. It was an easy walk to get to the top. We had to go! This is my 6th Michigan County high point. The hill itself has no name. 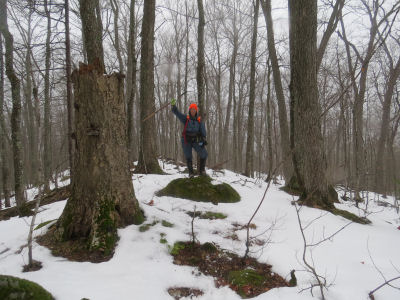 Bill said, "Overall, I thought this day was pretty easy." Joan said, "Are you kidding? I would call it strenuous." I really struggle with climbing over so many fallen trees that are crotch high.(Or, alternatively, to walk around them with hidden holes under the snow where branches are trapped.) It took us 7 hours to hike the 8 miles. In the early afternoon it started to snow/sleet/rain with the emphasis on rain. But we made it to the western trailhead of the McCormick, our intended goal. 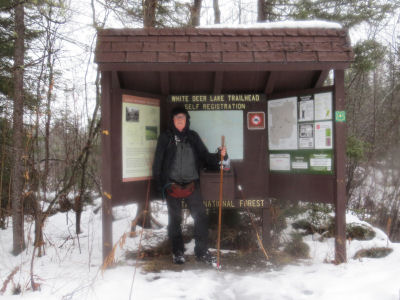 I've now successfully closed the 20-mile gap between the above point and Red Road that required the long difficult drives to remote trailheads. It took me 3 days instead of the two I'd hoped. It is taking a lot of resources and time to hike very few miles. The weather may be horrible tomorrow. The forecasters can't seem to agree. However, I'm beat. We need to reorganize the plans again (AGAIN!) and re-think this. If I can't even make 10 miles a day, perhaps I need to take a seasonal break. There are still about 100 miles west of here that I skipped, and they are getting dumped on again tonight.

Sounds like a rough hike. I'm glad you didn't have to do this section alone.

Good call taking a rest day. Never good to be hiking during a winter storm warning.

Dan- Yeah... the storm never materialized where we are, but the wind was brutal, and I was beat.

Lulu: "I have never seen a moose, except for the one Dada used to have on a T-Shirt!"
Java Bean: "Why did Dada have a moose on a T-Shirt?"
Lulu: "I don't know. Every time I saw it I would think, 'Whassamatta U?'"