I love the little house wrens. Some people say they don't want them near their houses because they are so loud. They are loud, but I don't care. I'm always happy when one shows up. I say "one," because the male arrives first and builds a nest. Then he begins to sing and twitter his fool head off trying to attract a female and convince her that he's built a nice nest.

I've been hearing one off and on all week. Today, he and his fiance gave me quite a show. The only issue is that I had to take the pictures through a dirty window and a screen, so they may look a bit hazy. 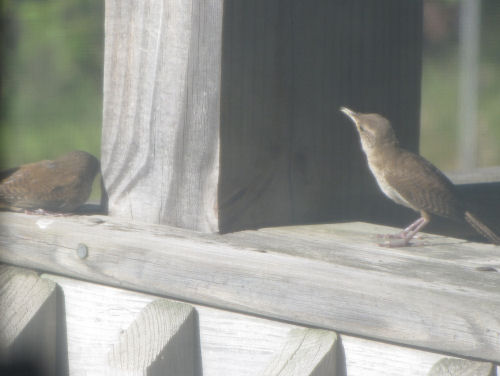 Mr. Wren is on the right, and he was chasing Miss W around and around the corner post of the deck. I need to tell you that I'm not absolutely sure this was a courtship "thing," but I don't know what else it would be. 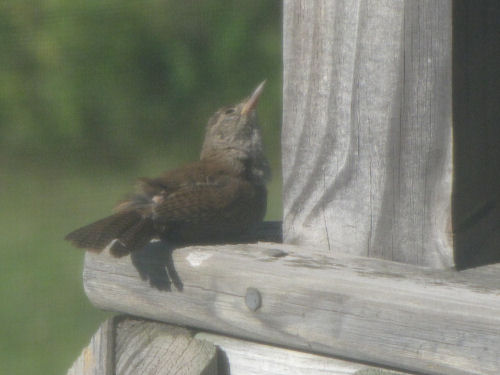 Miss Wren was being coy. She spent a lot of time hunkering down on the far side of the post and fluffing her feathers. The position she most often took was the one shown below, which I found very odd. I was lucky enough to get one picture of it. 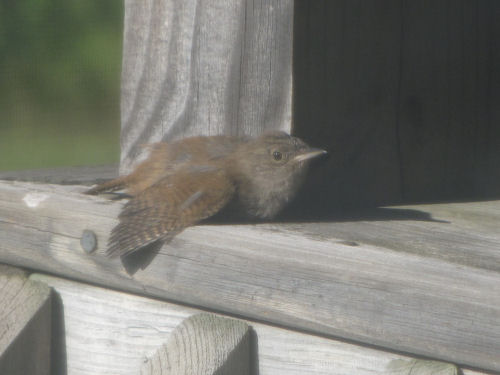 She would flatten herself out against the railing, and lay that one wing over the edge. This was actually the behavior that first attracted me. I thought maybe she was hurt, but later she proved that she was fine.

Every so often she would spread her wings and tail. See how her tail is forced downward? Wren tails are naturally pert and have an upward tilt, so she's doing that on purpose. 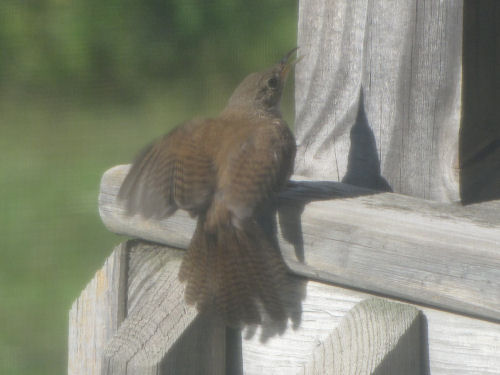 They gave me several minutes of entertainment, and then with a great deal of twittering they flew off together. Some other years, there has been a nest under the deck, but I haven't heard enough noise nearby to indicate that this year, I don't think. I'll have to try to find their nest of choice. That is, if Miss W. approves and agrees to become Mrs. W.

I am glad to have this neighbor too.

The sparrows always give me wake-up songs in the morning.

Please for Christ sake help this poor boy from Haiti

She is definitely flirting.

How lovely. We have little Wrens here and I love when they arrive. Their twitters are sweet.

they're cute, music to the ears,did not know the female can be a flirt :)

Windows, screen and all, there is no need for apology for those pictures. They're great!

Seeing this is the kind of special experience that I love nature the most for.

Those are really great. That had to have been a thrill to watch them. Mrs. W is certainly putting on quite a show

rainfield- sparrows are sweet, but you will know you've been serenaded if you hear a wren. You would not believe the level of noise that can come out of such a little bird.

John- she's being quite coy, but showing off those pretty feathers.

Glynis- I'm glad you have wrens too!

betchai- this is the first time I've seen any of this behavior, but when they do it right outside my office window... well...

Ratty- I wish they were nesting close again, but I think they are in the orchard somewhere

Ann- and she really had the boyfriend's attention- they went round and round that post quite a few times!

What fun, observing their courtship. Have you ever seen the grand finale, with the eggs and then the baby birds?

Carmen- not this year, I can't find the nest. A few years ago I got pictures of the babies taking their first flights.