Three Lakes and The Bridge

Anyone who travels from the Lower Peninsula of Michigan to Marquette in the Upper Peninsula (or in the other direction) will see three lakes and a bridge. We are not talking just any little lakes- you'd be sure to see some of those too. Nor are we talking about any little bridge.

These were taken on my return trip today, so I'll show them in that order. 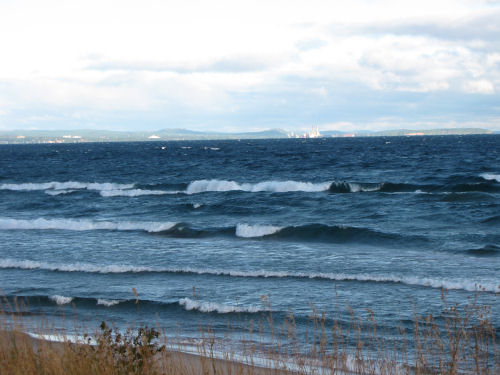 It was trying to whip up a storm when I left Marquette. Ahead of me was quite dark, but Lake Superior was beautiful. Yes, the three lakes I'm talking about are three of the five Great Lakes. This is looking back toward Marquette.

A couple of hours of driving took me to the south edge of the UP, and now I was looking at Lake Michigan. 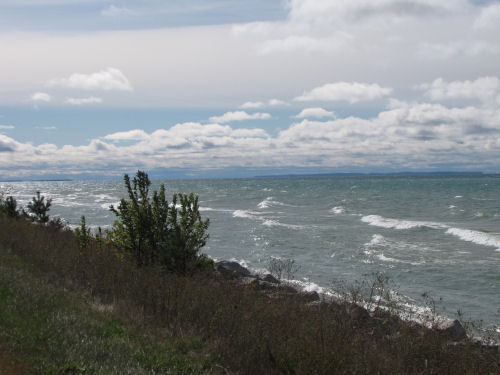 The land you see in the distance is the western bulge of the Lower Peninsula. As I headed farther east, The Bridge became visible. In Michigan, one never needs to explain what they mean by "The Bridge." It's the Mackinac (say MACK-in-aw) Bridge which spans the straights of Michilimackinac.

This is one of the few vantage points where you can see the entire bridge. 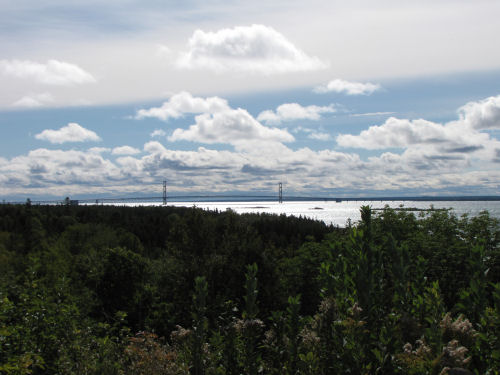 The third lake? Just on the other side of The Bridge is Lake Huron. Michigan and Huron join at the straights and have the same water level, the only two of the Great Lakes which are equal in elevation.

It's a crazy busy week for me, but I'm home safely, and worked hard this evening. So far so good.

Great shots of some Great Lakes, and the Mac is a sweet bridge. Any day that you can see even one of those lakes is a great day!

The lakes are huge.

I LOVED these pictures! This is where we always found ourselves in summer when I was a kid. Lake Superior is one of the coldest lakes I remember swimming in and the Macanaw (sp?) bridge was wondrous and gave me nightmares for years. I was always afraid of falling through that grid to the dark water below. I remember the sound the tires made when we crossed and holing my breath until we were safe on the other side.

ps. I don't know your name :( will you sign it wen you visit my blog?

All the shots are lovely. The only one of the great lakes that I ever get to see is Erie but it's always a pleasure to visit it

wow, the first photo looks like an ocean with huge waves, it's a very beautiful lake.

What a great drive. Great pics too.

I like the views along big water, but I have to range pretty far from home to enjoy that.

rainfield- they really are. Lake Superior is one of the biggest freshwater bodies in the world.

Ro- thanks so much- you should try walking the bridge- you can look right through the grating!

Ann- Erie has some good views too. Somehow I always think of it as more tame.

betchai- it is sometimes called a freshwater sea

jakill- I find the actual driving boring, but love seeing the scenery

vanilla- you can catch the bottom of Lake Michigan in a few hours, but that's not a very pretty part- well, Indiana Dunes is nice

Easy to tell from that bridge photo that the architect was the same gentleman who designed our bridge in Florianopolis, Brazil...only ours is much shorter, of course! Would love to walk across someday.

What a small world! Later that same day, Sylvia and I stopped at the same spot to get a picture of the bridge.

Beautiful pictures of a truly awesome part of Michigan. It is simply beautiful "up north." The UP remains wild, which is a national treasure. And the lakes ARE like little oceans. To be in the center of three of them is a special treat.
Thank you for the images!
Super great!

Loretta- I'm not too interested in braving the crowds again, but I could probably be convinced.

Ferd- up north is indeed a special place. Glad you concur.