Wind Power on the Way!


I live in a windy place. For several years now, companies have been trying to locate wind turbines here. First they wanted to put them in the Manistee National Forest where they would be visible from Nordhouse Dunes, the only wilderness in the lower peninsula. Nope.

Next they had the idea to put them offshore in Lake Michigan. Nope.

The final result was they got some individuals to lease them the land. That works just fine for me. I think they are rather majestic, but I wasn't a fan of putting them in the forest or the lake.

The tower bodies are coming in sections by rail. Here are some going by my house. 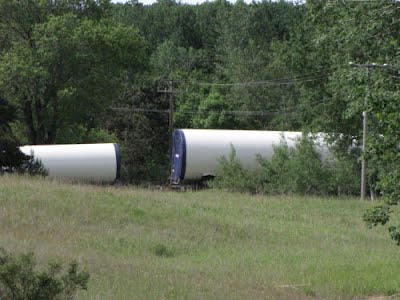 There have been billboards warning drivers to watch out for trucks carrying the blades. I'd seen some in North Dakota, but somehow there's more space there. Today, when I encountered three of the blades it was pretty darn impressive. One truck can bring one blade. No wonder the blades don't come by rail. They are too long for train cars. 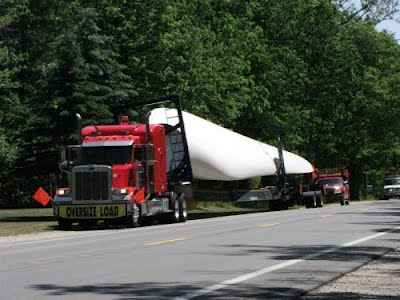 It's hard to tell the length even so. The trucks are at least twice as long as regular ones, and have to have escorts, of course. This pic, of one going by my car gives a slightly better sense of their size.

One friend on FB is doing a really good job of chronicling this whole process because one is going in near his house. My attempts are haphazard, but I'm glad I got a picture of the blades.

The turbine blades near Ithica are 190 feet long. The towers 300 feet high. They have conducted wind surveys around here and there is talk of possible installations. I'm not sure what, if anything, is happening just now.

Interesting. I looked into this last winter as I was watching a development in Texas and found that turbine blades range from just over 100 feet to nearly 200 feet in length, depending on the model. You got a really good, close-up and personal look!

Chuck- I don't think we can get enough electricity out of this, long-term. But it's a good direction.

Lynn- I've never been so close to the pieces!

vanilla- these seem longer than the ones I saw in ND, but I haven't heard their exact size.