(no jokes about the ages of the friends, ok?)

Elaine and I have just had a great day together. We visited several waterfalls and a couple other places. I plan to share those with you over time, but long blog posts from the road are difficult. After a day of exploring, we met with Janet and Marie for dinner. Left to right are Elaine, me, Janet and Marie. 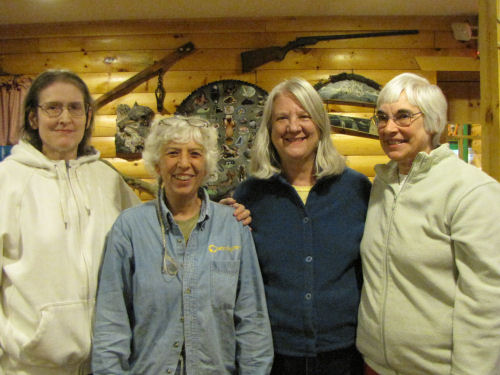 Elaine and I were friends from school and church. Janet, Marie and I were friends through Girl Scouts. Marie and Elaine had met a few times, but Elaine and Janet never had before. We made a lot of noise in a small restaurant, but the waitress was understanding. We told her she should consider it a good omen that people can still have friends when they are old.

I really hope to come back to this adventure another day, because there is lots more to show you, but I just can't do it tonight.

I will show you two of the waterfalls that define the Finger Lakes area. You've seen the first one before. It's Taughannock (taw-GANN-uck) Falls. It used to be billed as the highest falls east of the Rocky Mountains. I guess now they are calling it the highest sheer drop falls in that range. At any rate, it's 215 feet high. Of course, in these long shots, it doesn't look all that big, but it's just the scale. It's about a half-mile away from where the picture is taken. 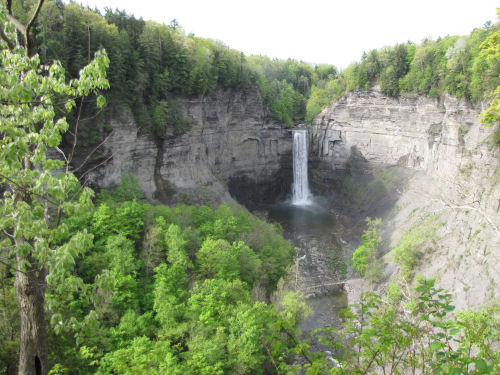 The last falls on our itinerary for the day was Ithaca Falls. This one is pretty impressive in its own right, and you can walk right up to the base of the falls. Today, however, I'm just giving you the long shot. 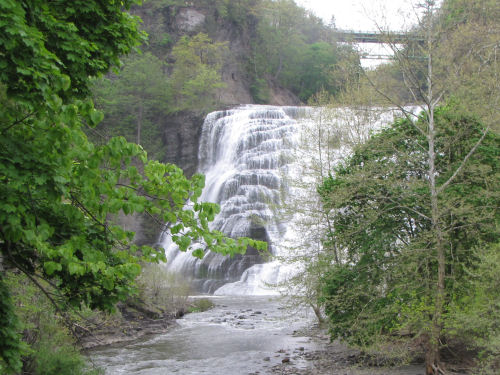 OK... I'm officially tired. Tomorrow morning, Marie and I head for the trail. I've got posts scheduled for while we are hiking. Hiking pics will show up after we get off the trail.

Love those shots. My knowledge of the Finger Lakes region is limited to what can be seen from a car on the expressway. We used to pass that way at least once a year when we lived in Connecticut and would return to Michigan to be with family.

Both falls are impressive. Even at distance of half-mile, that is an awesome drop!

what a handsome and happy group. great shots of the falls. enjoy

Days with friends are great, and so are those waterfalls!

I so need to check out my area for place to hick (shouldn't be too hard), 'cause you make me want to go...

Any falls are pretty, in my opinion. The most impressive I've ever seen, however, were Iguazu Falls on the Argentian - Brazilian border. I was lucky enough to stay overnight at the Internacional Hotel on the Argentinian side, right at the falls so I got to see them with no other tourists around as well...a very spiritual experience.