We are at Marie's house, and there are SO many interesting pictures from our hike, I can hardly pick just a few. I'll try, and perhaps I can come back to some of the topics that could use more story-telling on a slow day later.

We began hiking Wednesday and the weather was mostly great the whole rest of the hike. A couple of days were chilly, but that's much better than hot.

We were hiking on the Finger Lakes Trail in eastern New York, on the portion east of where it is concurrent with the North Country Trail. We put one car at Tucker Road, and drove back to East Pharsalia where we began our hike for the day. While we were getting our gear ready, this man came across the road from his house to talk to us. 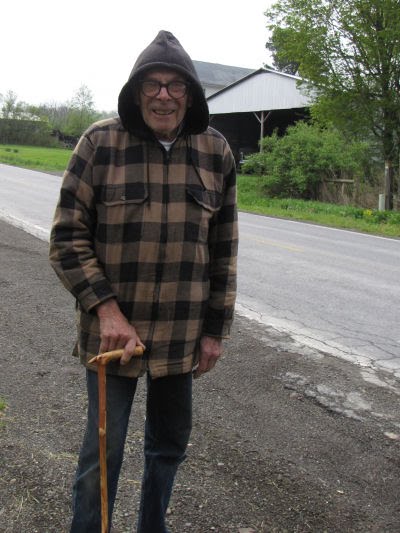 Henry gave us a nice send-off. He was going to walk to the pond and was impressed that I had a wooden walking stick. He does too- one he carved from a tree he got beside the pond. He told us his name was really Jerry, but his brother was Gary. When their mother would call, both boys would come and then she would yell at the one she didn't want. Jerry got fed up and said he was going to use his middle name of Henry, and he has for the rest of his life!

We began with a short road walk, but were soon welcomed to the woods. 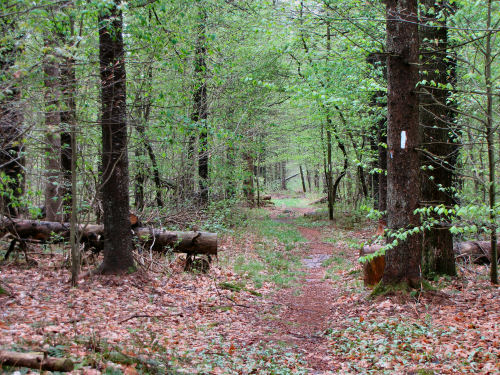 This next one is a first for me. I've never seen any slugs except the plain old yellowish-brown-gray ones. This specimen was about three inches long. It doesn't seem to have the same kinds of spots as the Leopard Slug, although there is a fair amount of variation. I'll keep trying to get an ID. Meanwhile, just enjoy! I love slugs. 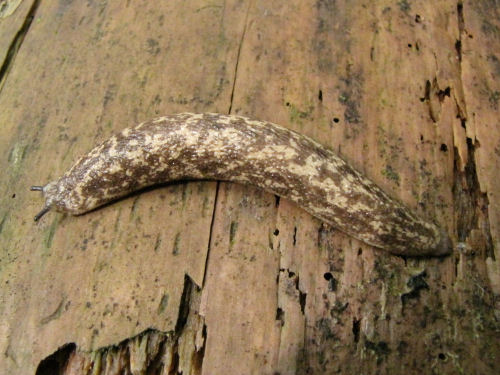 While we ate lunch, we had some wonderful entertainment! A white-crowned sparrow was jumping and peeling dandelion seeds from the old heads. I have a video, but I probably won't get that edited till I get home. 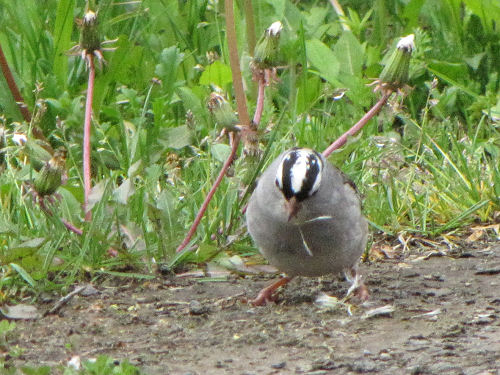 For our first day, we walked 10.0 miles. We're just day hiking, from one car to the other, so after walking we went to a place called the Outpost. It was just a bar with a short menu. I had a burger and Marie had a BLT. But it wasn't out of the way, and that's always a plus.


I think I'll include a picture showing what Marie and I are doing this week as well. Today, we emptied her pantry room and wire brushed the walls, and bought water-sealing paint. Tomorrow... take a guess. 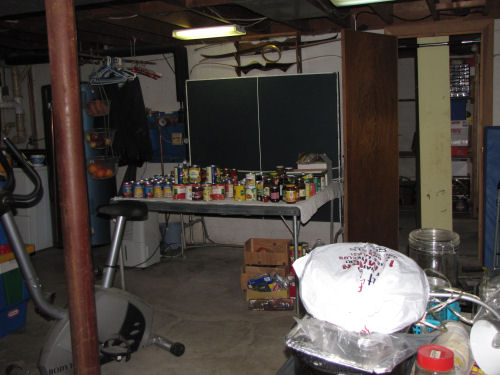 I like slugs too--their little antennae are so cute going in and out. And I like their little slime trails in the morning light. I'm weird like that.

Hey, I was talking to Chuck this weekend, and we were thinking of having a meet-up this summer. I know David (Vanilla), Chuck, and I are in--are you??? We can make more definite plans if we know if you are in.

Sounds like Henry is quite the friendly fellow.
I can't say that I like slugs but that sure is an interesting looking one. Like you, I've only ever seen the plain old ones.

I rather like the sparrow much better than I like the slug! We had white-crowned sparrows at our feeder some years back; haven't seen any recently.

It's just a wild guess, but might you have plans to do some painting. Henry is an interesting fellow, and so is the sparrow. I watched a charley (my name for woodchuck) eating dandelions Sunday afternoon.

I don't know why but slugs have never been favorites of mine....your hike sounds wonderful and you always have such fun on them.

Lin- I would love to be in- will depend on the dates and the distance. I'm busy Aug 2-5 and some other assorted dates. Of course I'm sure you all have some of those too.

Ann- We weren't sure we were going to "get away" once Henry started chatting, but it wasn't too difficult

Vanilla-I wonder if the sparrow would have lunched on the slug!

Chuck- Woodchucks are so much fun as long as it's not your garden they are munching.

Carmen- We do have fun!