Today was supposed to be the first day of hiking with Marie. Well, sometimes one has to be flexible. We left Elaine's this morning and drove to where we were going to set up camp and then begin the hike. It was raining when we left.

When we arrived at our destination it was pouring. Not just raining, but the kind of rain that has you soaked through in ten minutes, and no signs of letting up. Not a fun way to try to set up camp and get organized.

After a few minutes of checking the maps, Marie realized she has a cousin who lived only about ten miles from where we were. So... we had a nice dinner and are sleeping in a bed tonight. It's supposed to rain tomorrow too, but not nearly so hard or continuously.

So, I bring you more pictures from my day with Elaine, yesterday. The first is a fisherman on Cayuga Lake. It was a hazy day, and I thought the image was much better in black and white. 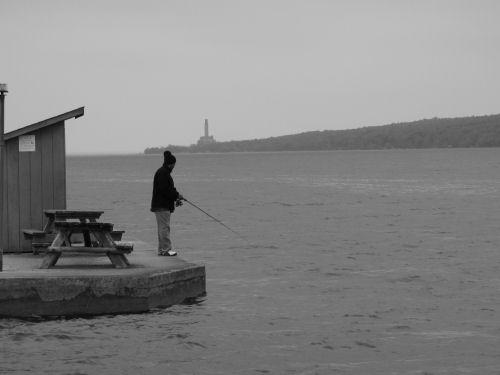 There was a footbridge over a channel, and the barn swallows were having a good old time swooping under the bridge, but they were too fast for me to catch any of that game. However, I found a couple of spectators in the bridge supports. 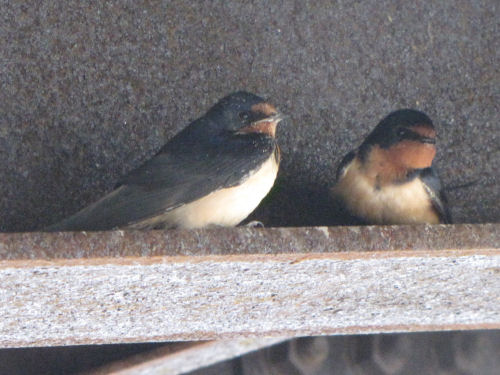 Finally, here's another picture of Elaine. We sat on the beach sifting rocks, looking for fossils. It's an activity she loves, but she doesn't get to do things like this very often, as she can't drive, and she doesn't have someone to take her out on excursions like this. I really like this picture. She looks so happy! 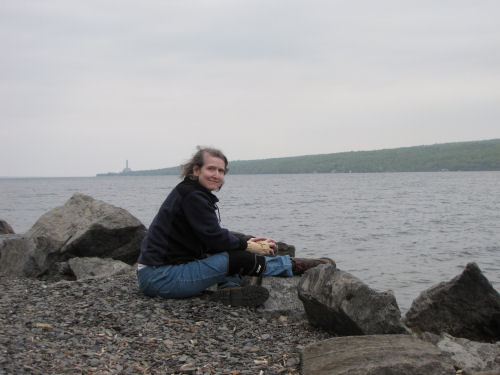 Not a very connected collection of images, but the day was like that. We just went to a number of favorite places and took whatever adventure came our way. Elaine and I are a lot alike, but she hasn't had as many opportunities as I have to just be herself and play outdoors with no repercussions from marching to the beat of a different drummer.

Well, you are pretty flexible, that's for sure! How disappointing to have to stay inside tonight when you were all ready for camping. But there is nothing like setting up or breaking camp in the rain--blech! I hope you have better weather tomorrow! Have fun, you two!

Gray day well spent; what I would call redeeming the time. Excellent photographic record of activities. I'm reminded of the year the barn swallows built their nest on the front-porch light fixture. Fun times.

I have similar swallows staying on the pillars of my car porch every night.

Unconnected images? It's like a little slice of life, and yours is a good one. Hope you have a better day.

sometimes the best days come from just letting the wind take you where it may.

Nice pictures, Joan. It's always nice, I think, to have an unexpected day when you can just do whatever you like.