Om and I went to a play tonight, in Muskegon (60 miles away). You may be wondering why we chose to do that when this storm isn't really over. Well, our tickets were actually for last night, and that wasn't going to be an option. They let us swap them for tonight. We allowed plenty of time and went out to dinner and got a good seat for the production (not reserved seats). It was downtown at the Frauenthal Theatre. 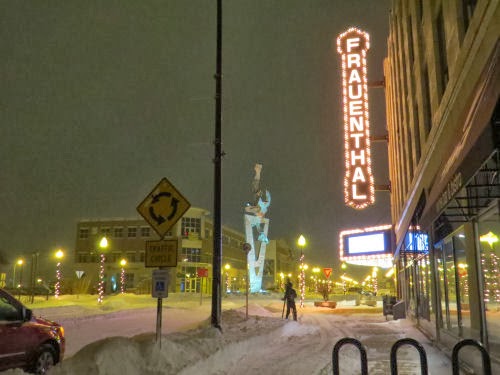 The play was one I'd never heard of before we started looking for one we would both like. It's called Time Stands Still, by Donald Margulies. It's very thought provoking, and worth attending if you can tolerate a fair amount of rough language. Here's the poster. Usually, just flash photography isn't allowed at plays, but they said no photos at all, so I can't bring you any scenes. 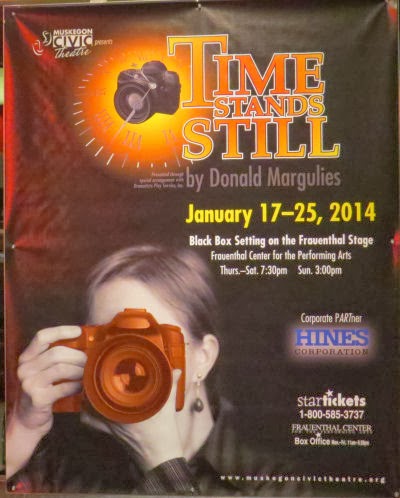 The basic plot is that of an injured photojournalist who comes home from Iraq, and her efforts to define herself for the future. Her boyfriend, whom she met in Iraq- he was there as a writer- had already returned to New York. She goes to his apartment to recuperate. There are only four characters in the play. The other two are a publisher who is their long-time friend, and his new, too-young girlfriend.

There is a lot of history between the three friends, but the young girl is naive seems out of place in the group, yet she serves to reflect back some of their self-questions and brings a note of truth to the play at a couple of points.

It was a good portrayal of modern angst from trying to figure out what one wants in life. At this point in my life, I'd say that all the characters were looking in the wrong places, but the play doesn't provide any answers. (A lot like "literary fiction," which I call "life is a sad enigma fiction")

Funny how what we want in life changes so dramatically over the year. Or at least for me it has.
Sounds like a good play
That weather finally arrived here yesterday. We're getting the snow, wind and very low temperatures.

Sounds like a nice outing.,,dinner and a play, even if you had a long drive to enjoy it.