I got to go out and help with the archaeological survey again today. Even though it was really hot, we just all worked a little slower. There were a couple more people so we had three teams instead of two and that helped a lot. Don't know the total holes, but we made significant progress.

I thought I'd show you why this site is being tested for artifacts. If you look right down the middle of this picture, you'll see that there is sky behind the trees. Also, please note how level the ground is. This is a point of land that extends out from a bluff high above the Manistee River. It's considered a prime location for a possible Native American settlement or encampments. 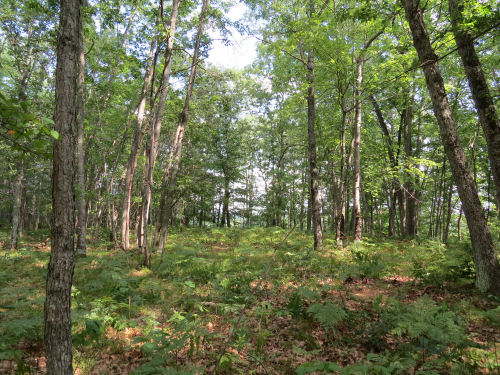 How high above the river? Pretty high! This picture isn't taken from the point shown above, but near where we all parked. It's nice and open because of the power line, so you can see the river better. But it demonstrates what a great vantage point a cleared space would have given anyone to see friends or enemies approaching by water. And if the space were on a point you could see both upstream and down. 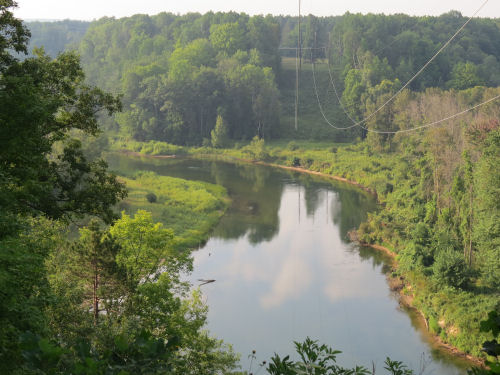 Last week Wednesday, the day after I was there, they found a beautiful undamaged arrowhead. That's the best find in any of the test holes yet. And its location was surprising. The real archaeologist expected the best finds would be in the sites closest to the edge of the bluff. Hardly anything was found there, and we've completed that transect. The arrowhead was located on the farthest transect from the edge.

When there are so many roots that you just can't manipulate the shovel down to the bottom of the hole, well, you just get down and dirty! 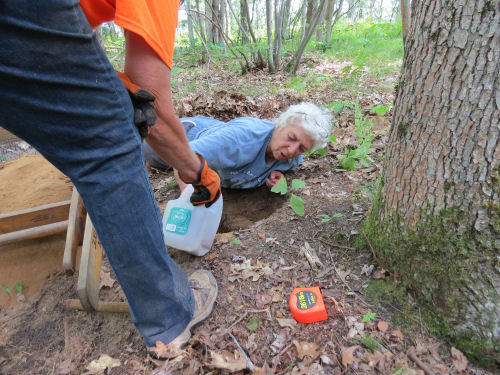 And we were treated to a lunch of brats!

LOL...yeah have to hit the dirt when it's required. So any pic of the find?

Beautiful location, and ideal for a camp settlement. Looks like a lot of work, but a fun project.

You really get in to your work :) How exciting that they found the arrowhead. Wonder what else they'll dig up