Hangin' Around the Water Cooler


I wish I could have gotten a good shot of this pose, but all I got was one through the screen with my phone. This is the fox squirrel, just relaxing around the water cooler, er... birdbath. What you can't really tell because of the window divisions is that it was just sort of draped casually over the edge, with one elbow hooked on the rim. Sometimes animals take on such human poses. Or is it the other way around? 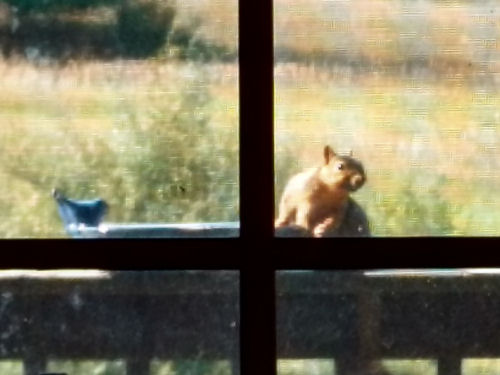 But by the time I went and got the better camera the squirrel was wary. But, at least that birdbath is finally being taken seriously by overheated wildlife.

In other news: I gave a program at Montague Library tonight. It went really well and I sold some books. It was last night, but since I blogged last I also wrote another chapter of DMS Mistletoe.

Cute picture. Normally when I go for the camera, the critter I want to take a picture of has already moved on

I like the squirrels. I know many people dissuade them from their feeders, but I like them for some reason.