New Gear - Socks, Not Quite


I'm going to begin this post by sharing one of my newspaper columns from a few years ago. The sock woes continue.


The Evolution of the Sock

In the beginning there was a foot, verily, a pair of feet.

These feet were not pre-equipped with coverings. For nine summers the feet merrily skipped along the pathways of life, crossing gravel driveways, scampering along weathered wooden barn floors, and roaming stubbled fields barely noticing their lack of protection. Alas, a trip to the foot doctor proclaimed the feet to be in need of coverings of sturdy and specific types!

Soon the feet grew used to their new rigid outer coverings, and even preferred this situation to the former freedom of youth. As the feet aged, more and more was expected of them. They were asked to walk for miles at a time, day after day, often carrying the load of an extra forty pounds. Sometimes the feet were wet, all too often the feet were hot... very hot. Eventually, the layer of cushioning between the feet and the boxes of leather became an obsession of the Keeper of the Feet.

The Keeper read the guidebook to happy feet. She bought Thorlos. They lasted one summer, being extremely hot and too thick. The next summer she bought Thorlo Hikers, and sock liners by Wigwam. The Hikers were still very thick, but a little cooler. The liners were nicely thin with a cottony feel to them. That summer the feet nearly suffocated, blistering at every protuberance and swelling two sizes. Skip the Thorlos. But the Keeper was a believer, and bore witness that the concept of liners was a “step” in the right direction.

The idea grew and was perfected (so the company claimed) by Wright Socks. (See missing link above). Each of these socks was woven seamlessly in two layers- liner and sock in one! The Keeper bought two pairs! The concept was brilliant, the materials disappointing. The socks shredded with only one long walk beneath their soles.

Next the Keeper discovered polypropylene, for the feet anyway. While other parts of the body some distance from the feet rebelled at the high-tech fabric by breaking out in hives, the feet embraced the silky liners. And this time the top layer came from Eastern Mountain Sports. No matter that each and every one of these socks cost more than the minimum wage; the quest for truth was not to be hindered! The Keeper closed her eyes, swallowed hard and slapped $24 on the counter for each set of socks and liners. But the feet were still unhappy. “Too hot,” they wailed, gnashing their toes, once again blistering in an agony of confined spaces.

“OK, fine...” the Keeper retorted, throwing away the guidebook, and she went to Wal-Mart where she purchased thin cotton socks for 94 cents a pair. Relief, oh blessed relief! “Thank you!” the feet sighed. The Keeper bought five more pairs of Wal-Mart Socks.

But again, alas... evolution is defined as change. Wal-Mart, and apparently every other sock company, has now decided that cotton socks don’t wear well enough. The sock labels all proclaim “Longer Wearing!” or “Increased Durability!” The exposition of this doctrine teaches us that the socks now contain about 20% nylon. Gone is the soft purity of the cotton, exchanged for the scratchy taint of nylon.

The Keeper is about to take the feet to the hills once again. Polypropylene liners, new 20% nylon socks. She plans to be listening for what the feet have to say.


###
What the feet had to say that year was that the socks with nylon in them were crap. They slid down inside my shoes within an hour of walking. I did find some cotton socks for the outer layer the next year. That was then.

This is now. The liner socks are wearing out. I did manage to find pretty much the same thing in a size that will fit me. These are by Fox River. I bought 3 pairs. Don't even ask what they cost. They are a little bigger than my old liners on the far right, but not so loose that they bunch up.

The pair on the bottom are my old cotton socks- just to show you. The heels are way too thin... no protection there at all. Not even going to try them again. 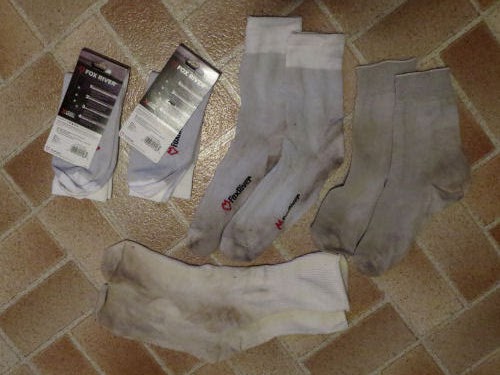 The two pairs of polypropylene (Capilene) on the right are dirty because I wore them on my hikes with Connie and Jerry this week. I needed to see how they would do in layers because I may have to do that for my upcoming trek. They worked fine, but I'd rather have an absorbent layer on the outside. Why don't I just go get some socks, or order some?

Because finding socks that fit me is one of the never-ending shopping traumas of my life. My feet are, in size, right between kids and women's sizes. And they are super narrow, so I can't tolerate a lot of (any) slop. I really have to look at a pair to know if it will fit. I either need adult socks that run small or kid sizes that run big. Add to that the idea that I want thin cotton socks and it's really difficult. I've found some on Amazon of the right weight, but I think they are going to be too big. I've also been looking at bamboo socks, but can't find any I like in the right size.

Of course if you order some and they are wrong, they have to be shipped back, blah, blah. Hopefully, there will be a part two to this sock saga within the next couple of weeks.

Posted by Sharkbytes at 9:18 PM

It never fails, when you find something you like, eventually the store is going to quit selling it or come out with an improved version.

Ann- I may have found some bamboo socks. Stay tuned

Socks and bras---can never find the ones you love ever again. *sigh*

Lin- I try to avoid bras!