We have Steve! That said, I think all of us look like we need to get to bed soon. We all got up earlier than we like. 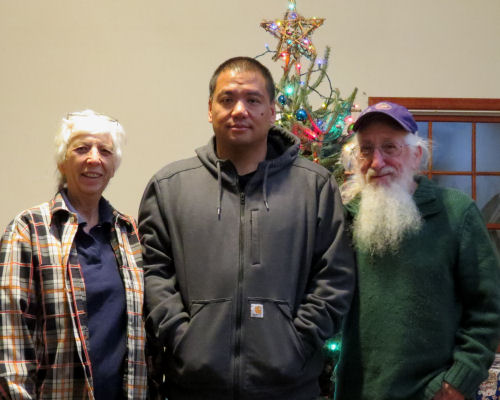 Unbelievably, he hadn't been home since 2011, so we haven't seen him for seven years. I kept saying five, but it was longer. SO nice to have him here.

I read the time wrong for his arrival so was at the airport WAY too early. Then the airline changed his flight number (but he didn't know it, and the desk said that flight number did not exist) and arrival times anyway, but even though I went shopping I did get back to the airport just as he was actually coming in. It was sort of a comedy of errors, but we connected.

Managed to buy a couple of craft things I needed that I couldn't get locally, so that was good.

There were three pictures I would have liked to take to show you but I was going 70mph on the freeway as my mind captured them. I'll just have to tell you instead.

1. I looked to my right in the low early morning light and a red-tail hawk was just landing on a branch with his back to me. His wings and tail were spread and the tail was glowing a bright rusty red.

2. A golf course was coated with frost and a few black leafless trees stood naked against the frosty, glistening whiteness. Very spectral.

3. A grove of young oaks, still holding on to their brown leaves were backlit with the morning sun making the edges glow a golden taffy color.

You'll have to settle for the word pictures.

In other news: The trip to Grand Rapids is pretty much all. I'm trying to get a few promotional materials printed before I pass out.

Sounds like you had quite a long day. Glad everything worked out in the end..
I'm always seeing things while I'm driving that I would love to get a picture of

Your descriptions of the scenes were lovely enough! Sometimes we just have to enjoy those sights for ourselves and not record them.

YEA! How nice that Steve is home for a visit!! Enjoy your time together.

Love the word pix. They can be better than photographs.