A Large Rodent Steals the Day


Steve mostly wants to chill out since this is the first he's had off work for a long time. Much to my surprise, he suggested we do a jig saw puzzle. (An activity I love, everyone else not so much.)

Anyway, he chose this one which I did once before in 2011. But I don't mind doing them more than once. This is as far as we got. The guys are tired of it already. Of course I'm going to try to complete it tonight so we don't have to pull it apart unfinished. 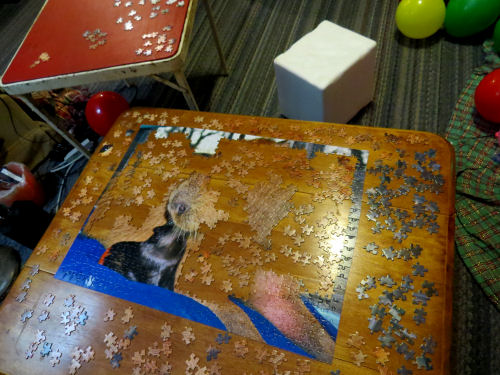 The large rodent? It's a picture of a capybara, the largest rodent in the world.

Not an earth-shattering kind of day. We are doing a good job of goofing off. That is all.

I don't think I've ever heard of a capybara. It's been a long long time since I've done a jig saw puzzle. I was going to buy one a while back and was shocked at the prices on them now

Charlee: "Is that an ROUS?"
Chaplin: "We heard they don't exist."
Charlee: "You can't believe everything you hear."
Chaplin: "Hmm, I guess not."
Charlee: "Happy belated Thanksgiving!"