Today, Loren and I hiked south from the Freesoil Trailhead on the North Country Trail. The snow we had on Friday was wet and heavy, and it has continued to stick to the trees, weighing them down. But when we started, the pathway was still clear. Other people have hiked it since the snow fell which also helps. 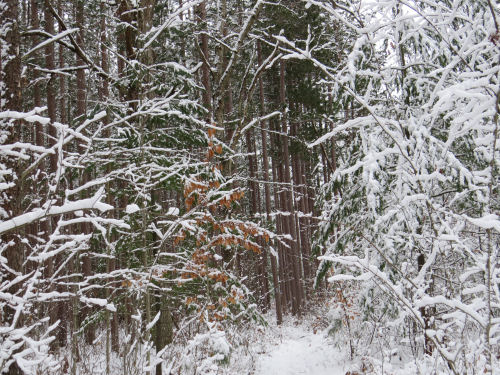 However, the farther we went, the fewer footprints there were. And the blazing... well, the blazing had not been repainted in way too long. Here's a tree with a blaze. 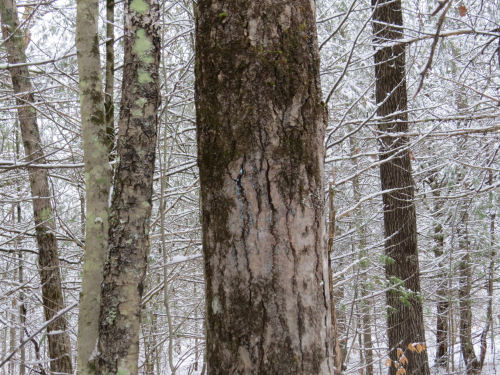 What? You can't see it. Look closer. There's a bit of blue paint hiding in the bark. 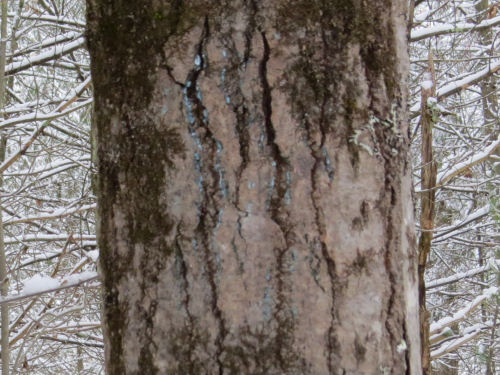 Yeah, that's what we ended up looking for. And the branches were all bending into the trail. In this picture you can actually sort of see the trail. That didn't last. We decided we didn't feel like bushwhacking where we had to keep ducking under branches that dumped snow down your neck. We were now past where anyone had walked, so we were just hunting for old blue paint with no real help. This is why it's embarrassing. This isn't my personal section, but it belongs to my chapter, and this is just unacceptable. A hiker should be able to follow the blazes even if the treadway is covered with snow or leaves or whatever. Maybe I can help whoever has adopted that section in the spring.

We did walk 2.5 miles before we turned around. 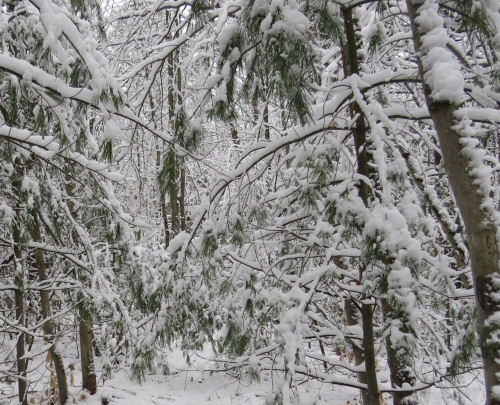 After Loren left, I decided to go north from there on my trail section. Since I'd just repainted the blazes in the spring, I knew it wouldn't be as bad. Well, I still had to duck under an awful lot of bent trees, but you could easily tell where the trail was. And you could always see a blaze. This is the view into the bottomland hardwood swamp that runs beside the first half mile. 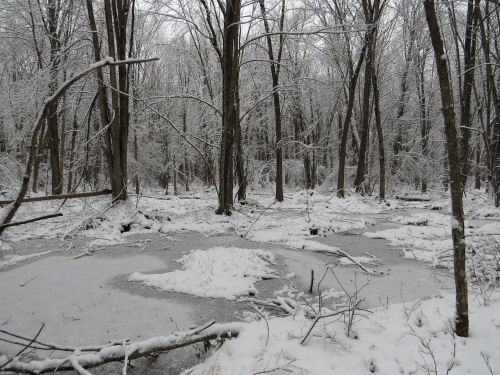 My goal was to make it to the old and unidentified railroad berm that I showed you back in March (link below). It was almost exactly 1.5 miles in. This time, I marked it on my trail app. Again, here's the view to the left (when you are walking north on the trail) which goes into a cut. 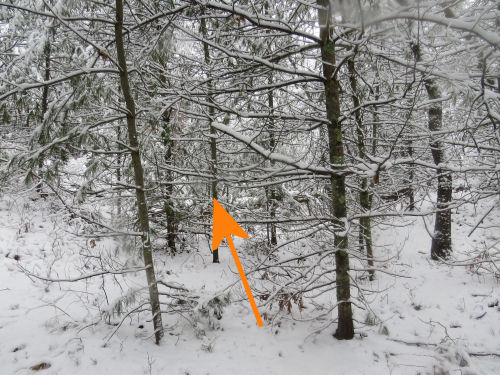 And here's the view to the right which is on a berm. 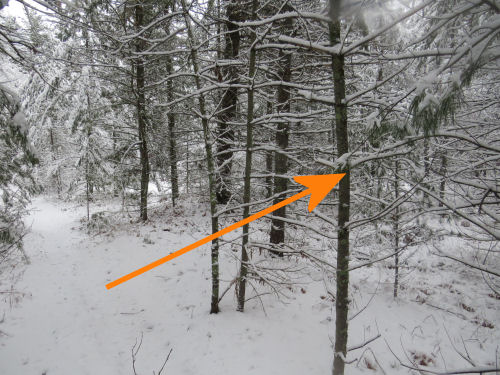 I decided to collect one more piece of information. Loren and I have been talking about trying to follow the old grade to see where it comes out. My thinking was that this was a spur of the Manistee and Luther RR. That still could be correct, but when I put the compass on it... wow! The trail actually angles slightly to the west there, and the railroad grade is almost exactly north-south! Now I'm really confuzzled.

I walked just a short distance on the berm and dropped a pin on my trail app on my phone. Then I did the same going the other direction in the cut. Yup- north-south. It parallels Tyndall Road, which is the border between Mason and Lake Counties. But it's really close to the road. Following it with all the saplings bent down isn't going to be any fun. We'll wait for better conditions.

I have spent about another hour trying to sniff out what this line might be. It almost has to be a railroad grade. The berm continues north past where I walked. The cut doesn't last very long, but quicly becomes a berm as the land drops gently to the south. They just didn't bother to grade road beds to that extent. Only railroads had to be so level. I did find a line for a two-track road on an old topo map that might correspond to this. So perhaps it was a logging spur, and then when the rails and ties were pulled up it became a road. There are SO many little bits of lost history like this. Those logging spurs were so ephemeral, they just laid them down and tore them up willy-nilly after the trees were cut.

Anyway, I hiked about 8 miles in light snow. I thought I might be a little sore, but I'm not. Hooray!

In other news: I did some editing, and pondered this railroad grade, yet again!

North Country Trail, Lake County, Michigan, south and north of the Freesoil Trailhead, and back.

Mommy on the Run said...

This is an AWFUL piece! What an entitled little (insert bad word here).

Sorry you can't see the paint, Precious! It's not like people are dying or anything... Hell, some of us are just literally dying. I would kill to get out for a few days! But I'm too busy wondering where I can get an ICU bed the next time my heart explodes. The only embarrassment is the tone deafness and downright idiocy.

Nice to get out and get some fresh air. Always a plus when you don't feel sore afterwards.
I'm speechless after reading the comment above mine.

Thank you for sharing your experience- speaking for myself, I really rely on the blazes!! If they were not visible, I think would turn around, just incase.

Oh go cry a river, build a bridge and walk over it. You signed up for your career, get over it. If you don't like what you read move on instead of sending hurtful things to people. You are the problem.

A chapter leader. A trained maintainer. The response to snow covering blazes on trees on another volunteer's section is to bitch about it on line.

Maybe talk with them first, then if nothing works, put it on line.

Do not want your poop on my scoop.

You are a good egg, Shark. I know you will make this better.

Pretty disappointed about some of the other comments here; "snow covering blazes" isn't even close to what this is about, and frankly the complainers in the comments seem not to understand that especially deep in the woods, unclear trail markers can easily get a hiker lost and into trouble.

Hiking: not (always) just a walk in the woods.

Well- this post certainly got a reaction. In case anyone comes back, this issue is not snow-covered blazes, or a weather event. This issue is that we, which includes ME, should have gotten this section in better shape before winter. I'm not whining at all, and am fairly perplexed at that particular reaction. In any case, a friend and I are going out tomorrow to fix this.

Alot of people didn't read the whole thing and jumped to a conclusion after the first paragraph or something.

TheTruckerwithTits said...
This comment has been removed by the author.
December 20, 2020 at 5:50 AM

Oops. There was a spelling error.

Wow! I don't know you REAL well, but even I heard your tone-and humor in this. Some won't. Meh, you can't please all the people, all of the time.