Familiar NCT Section- Not Quite the Endurance Edition

Got too late a start to hike 10 trail miles yesterday, but thought I might manage 8 or 9. Nope, not that far, either. It was 11 months and 2 weeks ago that I did pretty much the same hike and called it the Endurance Edition (link below). It was pretty tough. So how did yesterday compare?

The snow was about the same- maybe five inches on the ground. I started at Timber Creek (on US 10) and headed north. I took a lot of pictures that look like this, but this one is best. Lots of vertical dark stripes against the white snow. And a blue blaze! Can you find it? 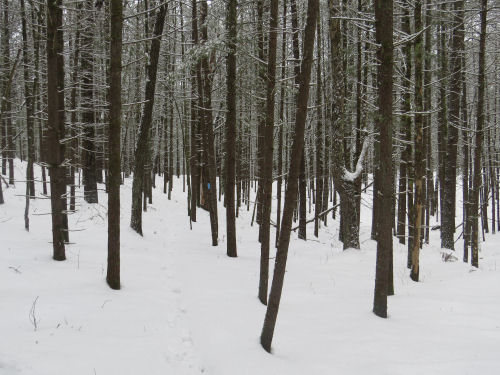 Just so we don't leave out the horizontal component, here you go. Thankfully, this was not across the trail. 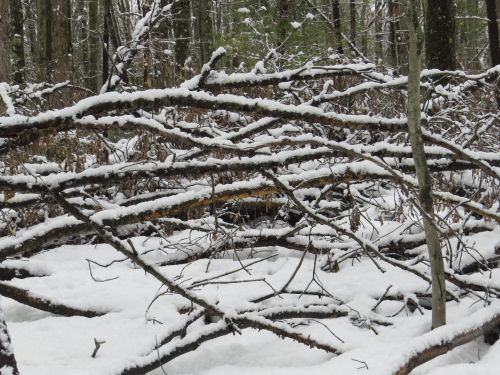 As expected, there was a fairly well-packed trail for about 2 miles. At that point the herds of hikers turn around and go back to the trailhead. But I wanted to go farther. So I did! No other hiker tracks after that.

This scene is just north of the next road, which is 8th St. This looks like it might be a pond, right? It's so level. 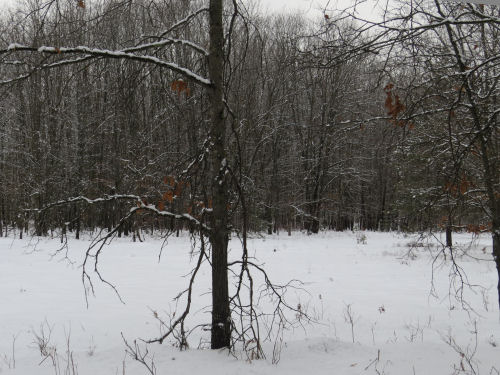 Surprise! It's just a little grassy clearing in the woods. Here's what it looks like in summer. That is butterfly weed (a milkweed) blooming in it. 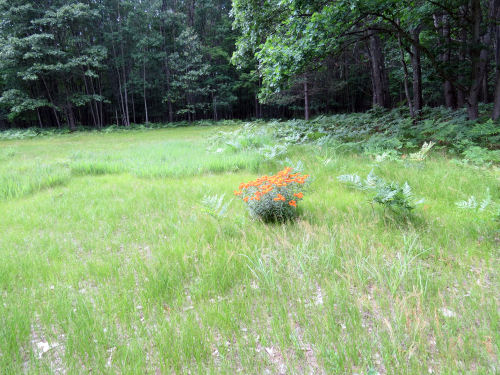 The only green I saw yesterday was this mossy log. It did look nice, fighting to find some light through the snow cover. Best finds were some wildlife tracks after I got into the unbroken snow on the trail. I'm pretty sure this is a coyote. Size is right. Very oval- two middle toes are practically in front of the outside toes. Gap between toe pads and heel. And the tracks were very regular in a straight line. 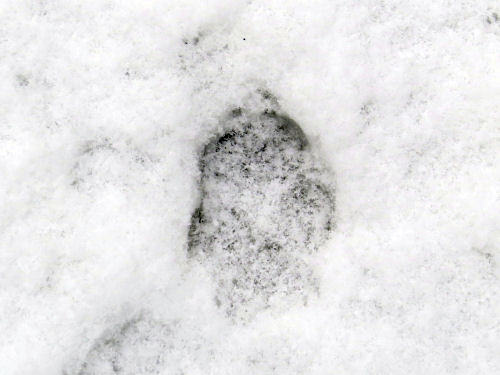 And I am relatively certain this is skunk. The definition isn't great, but it's the right size and general shapes. The track pattern was not the usual four tracks veering to one side and then correcting and veering off again, but they can make more of a straight line when they are just walking. And I THINK I see that little line that separates the heel in the right hand one, but it's really hard to be sure. 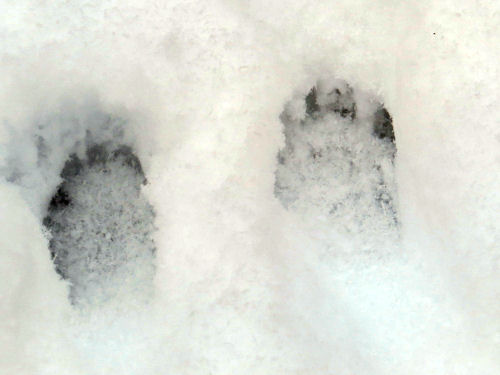 Here's another sign that a coyote or fox (those first tracks were too big for a fox, though) was following the trail. There were a lot of places where a nose had been thrust into the snow and wiggled around through the leaves to get a good sniff of potential lunches like mice or voles hiding under there. 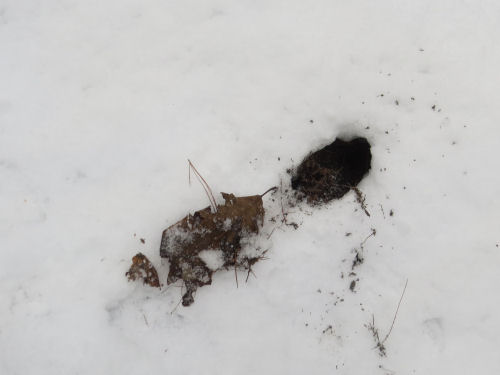 And, I learned something new about this very familiar section. I've always just thought about the ridges you cross, and considered it rolling hills. Yesterday, I realized that the whole trail seemed to climb a lot going north, and mostly descended coming back. Yup. Almost 200 feet of rise to where I turned around at the top of a ridge in Ward Hills. I know this isn't a lot of elevation change, but it's a fair amount for a trail here.

Anyway, I needed to be done by dark, so I walked outbound for 90 minutes, got to the top of that ridge and returned. Seven miles total. But it was quite a workout. Not quite as hard as the Endurance Edition a year ago, but tough enough.

In other news: Today I did my online class, did some editing, and took a road walk. I did see a pileated woodpecker, but they are shy, and I couldn't get a picture. Also saw and heard a little downy woodpecker.

It's looking like that here with all the snow. Your 7 mile hike was way more ambitious than I was yesterday

We did 2 miles yesterday...and it was COLD! Worse today. I think we are staying in, chickens that we are.

LOVE the tracks! I love to figure out who was going by and what they were doing. Thanks for sharing.

Ann- One has to get used to it.

Lin- Yeah! I really like tracks. Sometimes the snow is good for them and sometimes not so much.